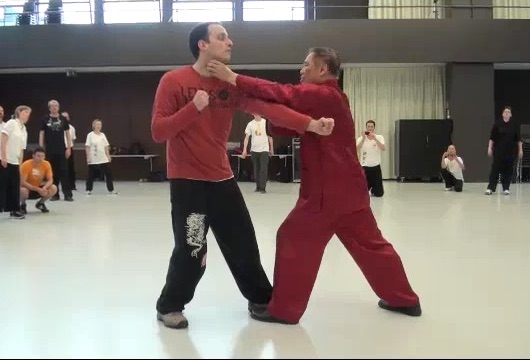 Being mindful is very important in kungfu training

I don't want to lose all desires and I want to be reborn again, if karma exists.

You will certainly be reborn again unless you are perfectly Enlightened. If you want to be reborn at a higher station in your next life, start doing good and avoid doing evil.

Karma, or by whatever term it is called, definitely exists in our phenomenal dimension. In simple English, it is cause and effect.


Editorial Note: Franz' other questions can be found in the March 2017 Part 2 and April 2017 Part 1 issues of the Question-Answer Series.

Is there a way to continue training without gaining insight?

Yes, there is a way. In fact, it is the way used by most chi kung and kungfu practitioners outside our school.

This way is to train blindly, often not realizing that you have adverse effects instead of benefits. Many martial artists, for example, submit themselves to be punched and kicked at in their training. They have no insight.

We in Shaolin Wahnam train with insight, which includes amongst other things that we know what we are doing and why we do it. Even when a student had no insight when he first learned from us, he develops insight after some time.

We are generous not only in our teaching but also in allowing students to make their own choice. You can choose to be smarter than your teachers, and stop all your training. It is your choice. 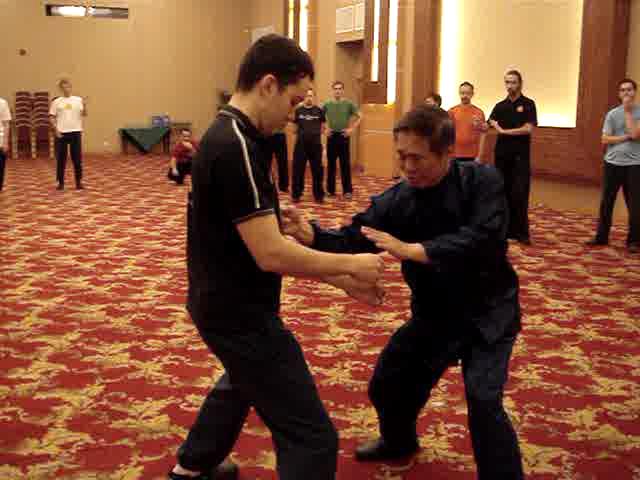 We gain much insight in genuine kungfu training

Would you advice me whether it is safe not to gain insight in our practice or to use the skills learned in meditation to be aware of every action I do.

You are confused over insight and skill on one hand, and their application on the other.

Let us take practicing chi kung as an example. Having learnt in our school, you will have the insight that practicing chi kung will give your good health, and also have the skill to generate an energy flow. But your sifu's insight of having good health from chi kung practice is higher than your insight. Your sifu's skill of generating an energy flow is also higher than your skill.

You have the skill of generating an energy flow, but you still have mental blockage. It shows that you have not applied energy flow successfully.

I would not advise you not to use the insight and skills you have gained.

I would also not advise you to apply the insight and skills you have gained in vispassana meditation in the way you described in your e-mail. These meditation methods may be excellent for other people, like monks ready for perfect enlightenment, but they are not appropriate for you.

Let us take an analogy. Suppose you want to marry a European girl of about 25 years old. Now you meet an African woman of 40 years old. Do you marry her, presuming that she will agree if you propose? No, she does not suit you needs.

This does not mean that she may not make a good wife for other people, but she is not an appropriate wife for you. Let other people who want to marry an African woman of about 40, propose to her.

Would you advice me, or would you not advice me whether it is safe not gaining further insight or using the skills learned in meditation, like mindfulness in daily activities, for example knowing that I want to move my hand and then move it without separating the knowing mind from the body, knowing that I am angry or happy at a moment without separating observing mind from emotions.

Forget about your knowing mind and your separate body. Just live your life beautifully and meaningfully. 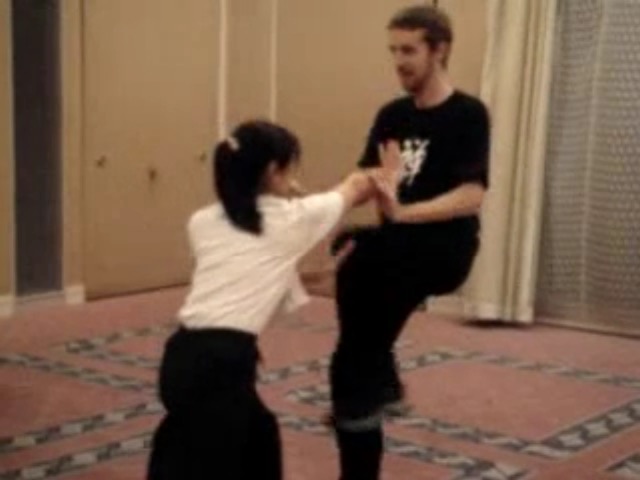 In genuine kungfu it is not just gut and strength

Should I use this method when it wanders away during chi kung and kungfu, in particular Zhan Zhuang?

This is an example of you trying to be smarter than your sifu and me, irrespective of whether you mean it.

Tacitly you implied that your sifu and I were fools, that we did not know separating the mind from the body would produce better results in our training, but you knew.

This is a main reason why you are still sick even when you have the rare opportunity to learn from us. You try to be smarter than us. You think, wrongly, that by adding other methods from elsewhere, you can have better results.

We have specifically asked students not to add anything we have not taught them. They can perform less, but not more.

In fact, we have become so cost-effective that now I advise students to attain only 30% of what they could attain, otherwise they may over-train.

You are a big fool, doing exactly what we warn you not to do, though you think you are smart.

How can people achieve super powers and become healthier without getting insight or is it a thing which always comes together?

Super powers, good health and insight are different things. They do not always come together. 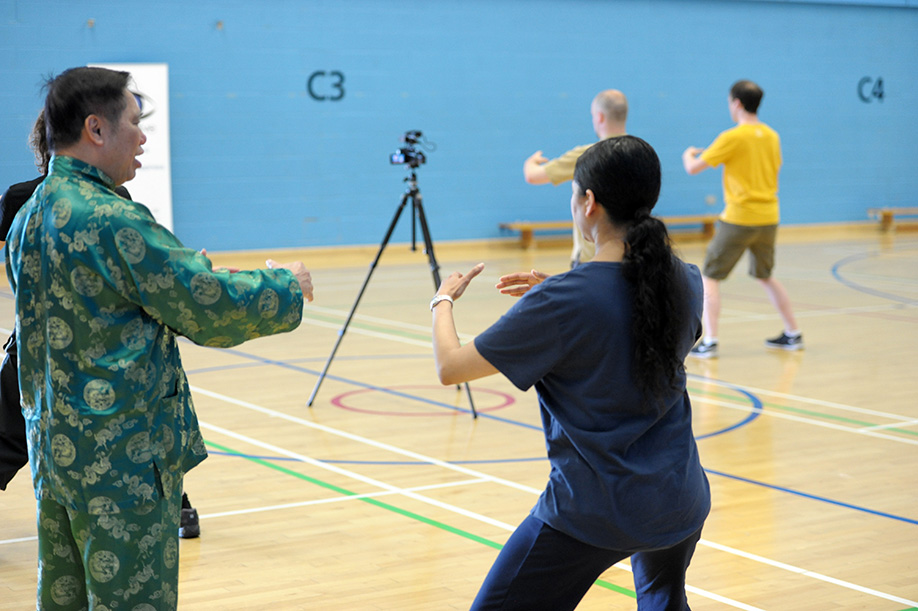 My sifu told me that kungfu was only the third factor in combat. The other two more important factors are being brave and having strength. Is it true?

Yes, it is true in today's world where kungfu combat is at a low level at its best, or non-existent for most practitioners. If a kungfu practitioner is brave and has strength, he can readily beat other kungfu practitioners or any people even when they have trained martial arts longer than him.

If you observe any free sparring today, you can hardly see any kungfu or martial art techniques. You see two persons generously exchanging blows and kicks. If one is brave and goes in brutally with strength, not minding being hit, he would readily defeat his opponent.

What about bravery? Even when you can use kungfu marvellously, but in a fight if you lack the minimum bravery to use your kungfu, you will be defeated. Indeed, some kungfu practitioners become so paranoid when faced with a combat situation, that all their kungfu vanishes from them at that moment.

This is not uncommon for those who only practice kungfu forms. If they practice genuine kungfu, which includes combat application, they will intrinsically be brave, as expressed in the saying, "ngai ko yen tam tai", which means "as a person becomes skilful in his kungfu, he automatically becomes brave".

I realized, I am naturally doing reverse breathing during stances and other exercises, specially the stances that involve Horse Riding Stance, Tree Circle Stance, Golden Bridge and Lifting Water.

I remember in the past when I started with stances my breathing was naturally more focused in the abdominal area. The belly used to go in when exhaling and out when inhaling, like we do in Abdominal Breathing. Now, naturally I am doing the other way around, like we do in Reverse Breathing.

I tried to come back to abdominal breathing again, but it feels uncomfortable and forced. When I naturally do reverse breathing I feel more relaxed, focused, in deeper chi kung state of mind, and I also feel I develop a lot more force.

Sifu, is it correct to do reverse breathing in stances, sets, etc? Or should I avoid it? Is it harmful? What should I do? Am I doing something wrong?

What you do is correct. You can choose to use reverse breathing or abdominal breathing in stances, sets and other aspects of kungfu training or in daily life.

Most people do not know abdominal breathing or reverse breathing. These important breathing modes need to be trained.

Most adults use chest breathing, which is different from reverse breathing. Most elderly people use throat breathing, i.e. they breath from their throat, which results in their becoming easily short of breadth.

As the dan tian, or energy bank, is located at the abdomen, we normally use abdominal breathing. But when we wish to have a lot of energy for vigorous activities, we use reverse breathing.

Although you may not have learned the special techniques and skills of Reverse Breathing, your abdominal breathing naturally progress to reverse breathing. This will give you more energy for whatever purposes you practice your stances and other exercises. Congratulation. When you first learned stances, we used abdominal breathing so as to store the energy at the dan tian to develop internal force and mental clarity.