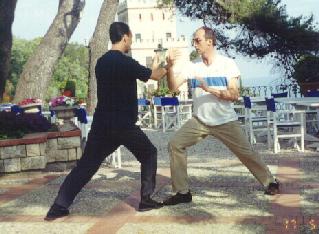 We defeat our opponents because we have advantages over them. These advantages may be created by you or offered to you by your opponent free of charge, i.e. without you having to make any effort.

For example, if your opponent's balance is poor when making any attacking or defending moves, he is offerring you a free advantage. If his vital organs are exposed, which is frequently the case in the way many Taiji players today perform their Bow-Arrow Stance, he is giving away another advantage. When he moves in without coverage, he is melting out a third advantage.

Indeed free advantages are thrown about generously in today's sparring, even at black-belt levels. Notice, for example, how karate and taekwondo blackbelts rush in to attack with ferocious punches or high kicks -- often neglecting their balance, often with their vital organs exposed, and routinely without adequately protecting themselves against counter-strikes. When you observe these points, you will appreciate my statement that the standard of sparring today is low (when compared to genuine kungfu fighting two hundred years ago), is not made out of conceit or disparagement.

Then, why don't their opponents exploit these advantages thrown about so freely? The reason is that their opponents, like the exponents themselves, are not even aware of these advantages -- or from the exponents' perspective, their weaknesses. They have been so conditioned to practicing their arts under safety rules as sports that they have neglected this crucial aspect in real combat.

For example, look at a typical photograph below taken from an intertional sparring competition. The attacker on the left committed all the three crucial weaknesses mentioned. 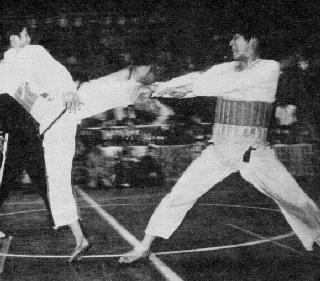 Nevertheless, even if you know the weaknesses but if you lack the skills and techniques to exploit them, you would still be defeated by such attackers.

The crucial point is systematic practice. If you merely learn the skills and techniques (which can be done in 5 minutes), and continue performing Taiji external forms as a dance, you would still be unable to defend yourselves against such attacks even if you dance for 30 years.

We have learnt -- and hopefully you have adequately practiced -- some useful sequences to develop fundamental combat skills like fluidity and agility which will give us technical advantages. We also have learnt creating tactical advantages as in continuous attacks and confusing attacks.

We shall learn two more tactics - "instantaneous counters" in this webpage, and "interception" in the next. 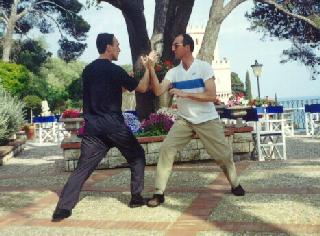 In the photograph above, Roberto and Attilio are at the "peng' position. 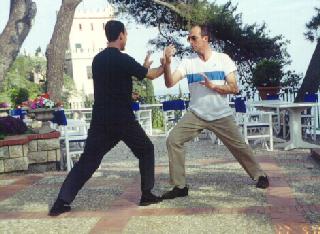 Attilio rolls a step backward to respond with a "peng" technique. His roll-back movement is as follows. First he places his front right leg just in front of his back left leg, and immeditaely he moves his back left leg backward, still maintaining his right Bow-Arrow Stance as before but he has moved a step backward. It is called a "roll-back" step. 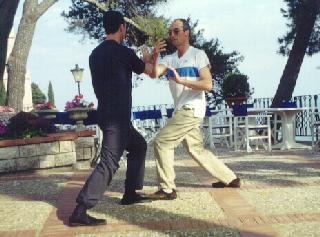 Immediately Roberto moves forward again for another attack. This time he does not use a "roll-up" step, but brings his back left leg a big step forward to a left Bow-Arrow Stance. Here Roberto is applying the tactic of continuous attacks.

Attilio responds accordingly. He moves his front right leg a big step to his back to stand at a left Bow-Arrow Stance and wards off the push with a "peng" technique. Roberto's tactic of coninuous attacks has no effect on him because he has been well trained to overcome it. 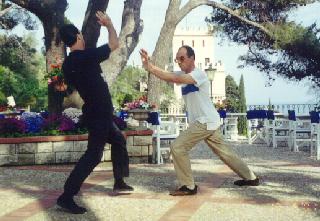 Now Attilio turns the table around on Roberto. As soon as Roberto completes his push and before he could start a new movement, Attilio moves forward with a push, using a "roll-up" step and sending Roberto off the ground. Attilio successfully applies the tactic of instantaneous counter. Before Roberto could settle down after his attacks, Attilio counter-attacks.

To overcome Attilio's counter-attack, Roberto rolls back a step and wards off the push with a "peng" technique.

The crucial point for Attilio's success is that he must counter at "the golden time", i.e. when the opponent has spent his move or force, but his new move or force has not begun. Should he be slow, he would have missed the advantage.

A useful way to practise countering at the golden time is as follows. As soon as your partner has completed his intended moves -- but not before or after -- you execute your counter-move. You need to have sufficient prior practice of your intended counter-move so that you can execute it timingly. It is normal that at first you would be too quick or too slow, but with devoted practise you can hit at the crucial point of time.

This above sequence is shown below in clockwise direction.