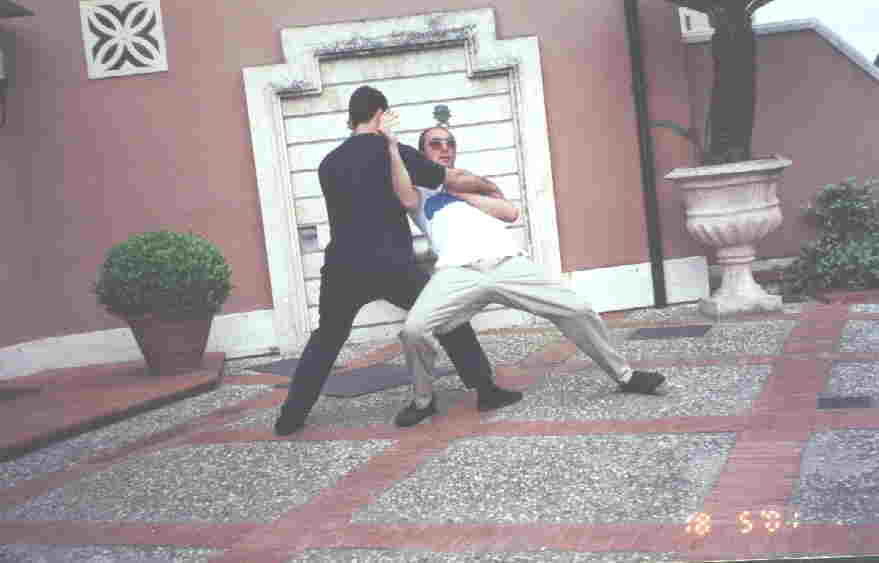 Felling is a one of the four major categories of attacks, the other three being striking, kicking and gripping. In kungfu there are many ways to fell an opponent; throwing him, as in Judo, is only one of the many ways. Pushing is one of the ways. In fact, the whole of Pushing Hands deals with this method of felling an opponent.

Felling an opponent, however, is often used as a preliminary means to put the opponent at a disadvantageous position so that you can effect a decisive strike, and not as a main method to defeat him. Unless the fall is drastic, like breaking his bones in the fall, an opponent can rise again to fight you. On the other hand, one decisive strike can put him out of action. Here, of course, we are talking about real combat, sometimes with life-death consequence, which happily is seldom applicable nowadays.

In these series we shall learn some felling attacks and their defence. 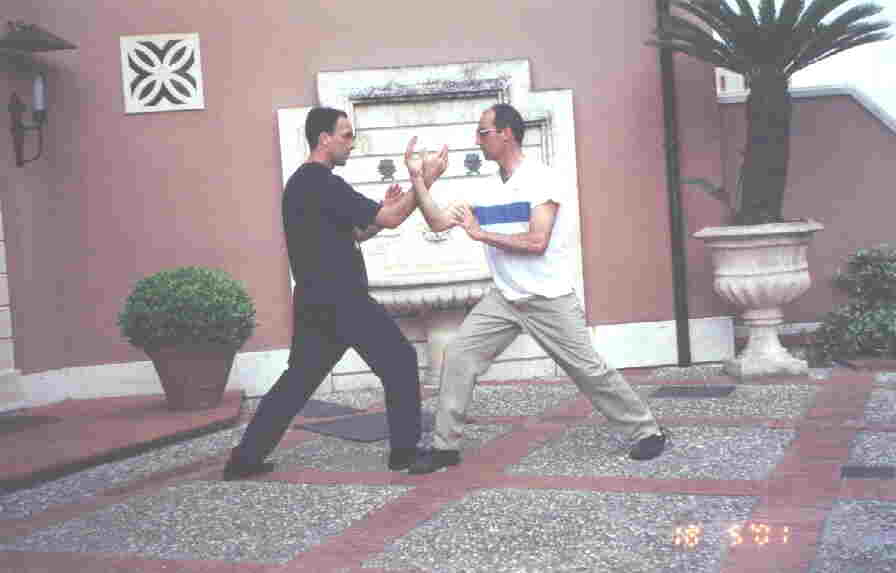 Roberto and Attilio observe each other at the Pushing Hands position as in the picture above. 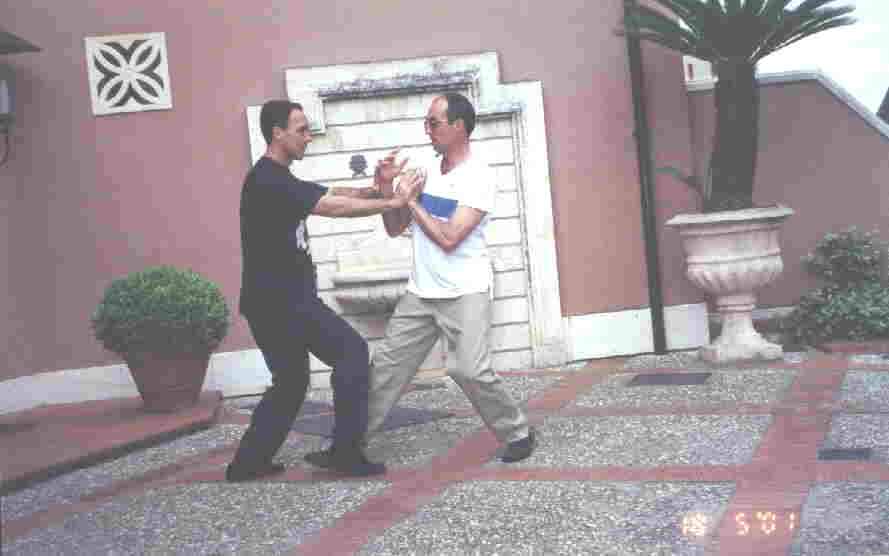 The "taming" or closing of the opponent's hands is very important, otherwise the opponent could lash out a drastic counter-strike. Do not neglect this point. This is a common mistake, which may turn out to be fatal, among many poorly trained combatants. If Attilio does not know how to defend himself, or is slow in doing so, he will fall backward. But it is easy to neutralize the push. One way is merely move the back leg a step backward. 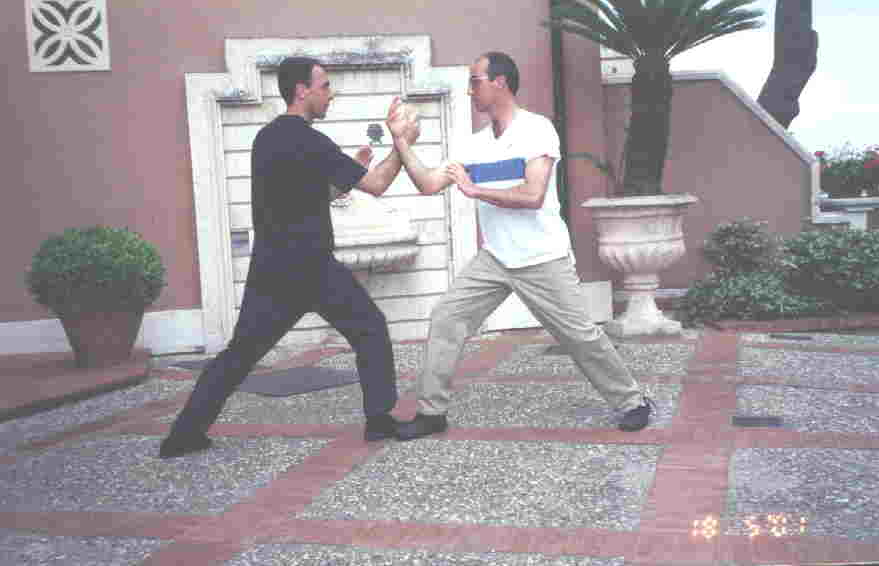 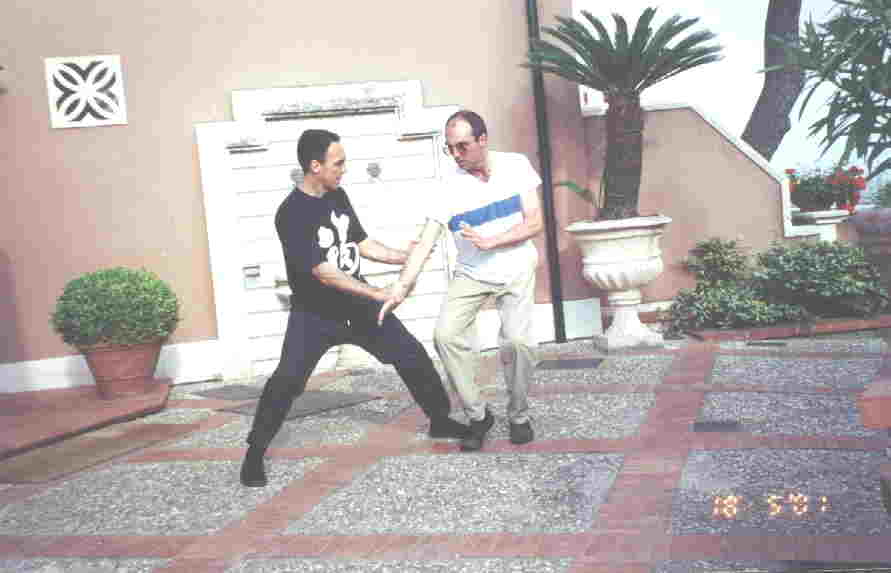 In another sequence, both combatants observe each other at the Pushing Hands position. Following the momentum of Attilio's forward moving arm, Roberto holds the arm and pulls it to his right and back, simultaneously moving his front right leg backward. This will cause Attilio to fall forward. This is a variation of the "lu" technique in "Grasping Sparrow's Tail" of Yang Style Taijiquan, or the pattern "Earth Dragon" in Chen Style Taijiquan. 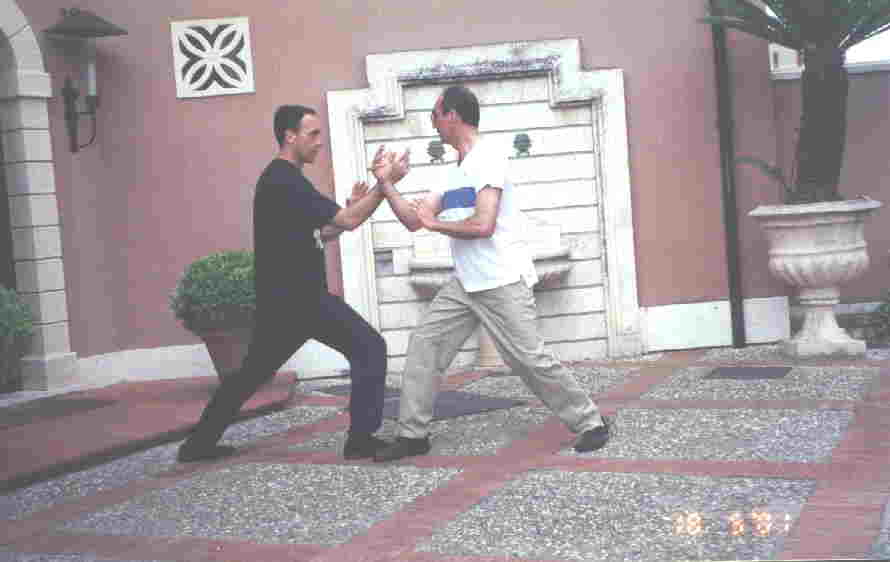 Roberto and Attilio sense each other at the Pushing Hands position in a third sequence. Then Roberto moves his front right leg a step forward and places it behind Attilio's front leg. Immediately he closes Attilio's arms and throws Attilio to fall backward with the "lu" technique. using his front right leg as an anchor. It is important that Roberto's Horse-Riding Stance must be firm.

This webpage shows three techniques to fell an opponent onto the ground. You must practise the various combat sequences many times to develop the skills before you can apply the attacks or the defence effectively.