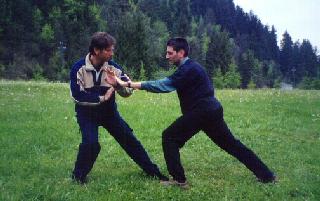 As you progress in your frontal attacks, you will soon face with a technical problem, especially if your opponent is massive. You will find that it is difficult to push him away. One way to overcome this difficult is to push him from the side. In this way you get a technical advantage, so called because your advantage is due to a better technique, i.e. instead of using a frontal push, you use a side push.

The pictures below show Javier gaining a technical advantage over Ricarrdo by pushing him from the right side instead of from the front. Ricarrdo did not offer this advantage, Javier has to create it himself.

This is what we would call an "active advantage", in contrast with a "passive advantage" where without the exponent doing anything the opponent offers him an advantage due to the opponent's own disadvantageous position. Indeed, the standard of sparring today is so low that if you can exploit passive advantages, which brawlers today throw away freely in free sparring, you would be able to defeat your opponents most of the time. 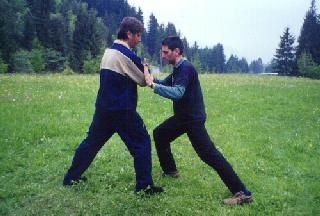 From the ready position with the "peng" technique (not shown here), Javier moves his right leg to his right side and simultaneously closes Ricarrdo's both hands. 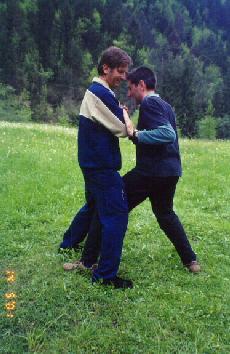 Immediately Javier moves his left leg forward in between Ricarrdo's two legs and is ready for the push, starting from his back heel.

Overcoming Javier's push is actually quite easy. Ricarrdo moves his right leg backward, and immediately shifts his body forward to the "peng" position (not illustrated here) to have better control of the situation. Now both Ricarrdo and Javier are in the left mode, where the left leg and the left hand are in front.

As in every situation, there is pro and con. In the process of moving to his right side to create an active advantage, some innate weakness may occur. Javier, therefore, has to be aware of the innate weakness and be prepared to handle the opponent's counter attack should he exploit the weakness.

You must remember that as you develop new skills, you must also consolidate your old skills.

When you are proficient with the skills, you may gradually apply them using a different stance or a different technique.