BASIC KICKING ATTACKS AND DEFENCE
(A Taijiquan Technique Against Any Kicks) 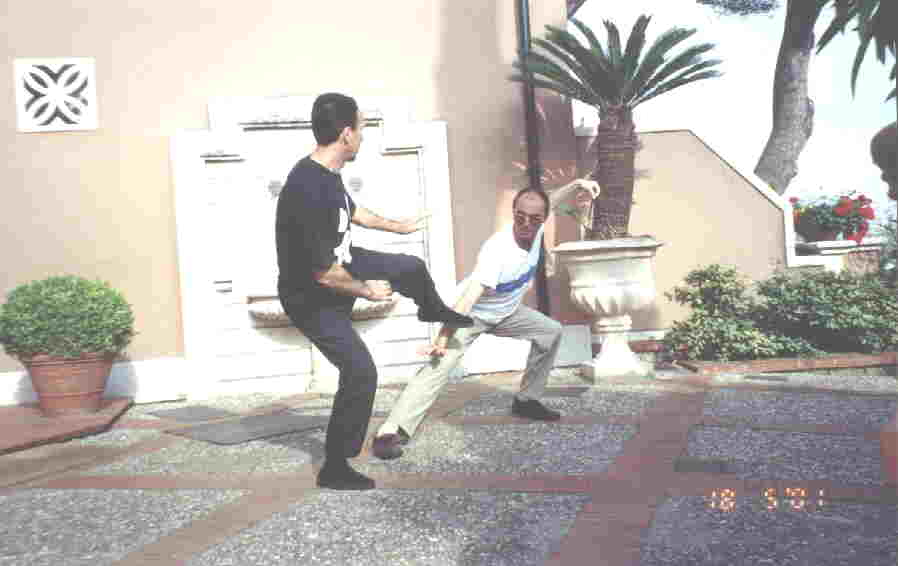 Taiji dancers, i.e. those who practice Taiji external forms elegantly like a dance, would be helpless when opponents attack them with kicks. How on earth could they block powerful kicks with their gentle Taiji movements, they may wonder. They would be helpless against any attacks anyway, for they had never learnt how to fight, but kicks would be particularly frightening as they are visually more aggressive.

Actually kicks are comparatively easy to defend against -- if you know how. And in this series you are going to learn one Taijiquan pattern that can be used for almost any kicks! It is also technically easier to counter-attack an opponent who uses kicks than another who uses any other modes of attack.

Why is that so? It is because that to execute a kick, especially a side kick, a high kick or a round house kick, your opponent first has to adjust his body position for the impending attack. He has, for example, to lean his body backward or sideways so that he can lift his kicking leg effectively.

This not only gives you sufficient warning time, but also slows down his attack significantly. Compare, for example, a strike coming from the ready position of Pushing Hands, which is technically four times faster and less detectable.

I remember that when I was a boy I read and sometimes heard kungfu stories describing past masters like Hoong Hei Khoon and Yang Lu Chan (who were great Shaolin and Taijiquan masters) in combat. I often came across descriptions as follows. "As soon as the opponent moved his shoulder, the master knew the opponent would execute a kick."

Kicks in these kungfu stories, replete with names of authentic kungfu techniques, were usually thrust kicks and snap kicks, which may not be as easily detectable as side kicks, high kicks and round-house kicks. Hence if your opponent attacks you with any of these kicks, you not only can defend against it readily but also have a good chance of counter-attacking him -- if you have been adequately trained to do so. 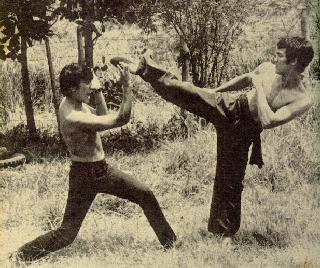 Bruce Lee contributed enormously to the popularity of kungfu, and his kicks were legendary. However, and surprising it must be to many people, from the perspective of traditional kungfu philosophy his kicks were technically slow and dangerously exposed. Yet he was a great fighter. This was because of his very high level skills, which compensated for the technical inferiority of his kicks.

Look at a typical kick by Bruce Lee, like the one illustrated above. His opponent could not defend against it because his skills were poor, and he probably did not know the appropriate defence techniques.

Suppose someone who lacks the skills of Bruce Lee (like he is not as skilfully fast and less powerful) attacks you with a similar kick. You could readily defend against it with "Low Stance Single Whip", the technique you are going to learn in this series.

There are many other effective Taijiquan techniques to counter-attack this kick. For example, you may use "Jade Girl Threads Shuttle", deflecting the kick and simultaneously striking the opponent's exposed groin. Or you may move in diagonally with "Striking Tiger" at the glaringly exposed target. For compassionate reason you may strike his abdomen instead of his sex organs. 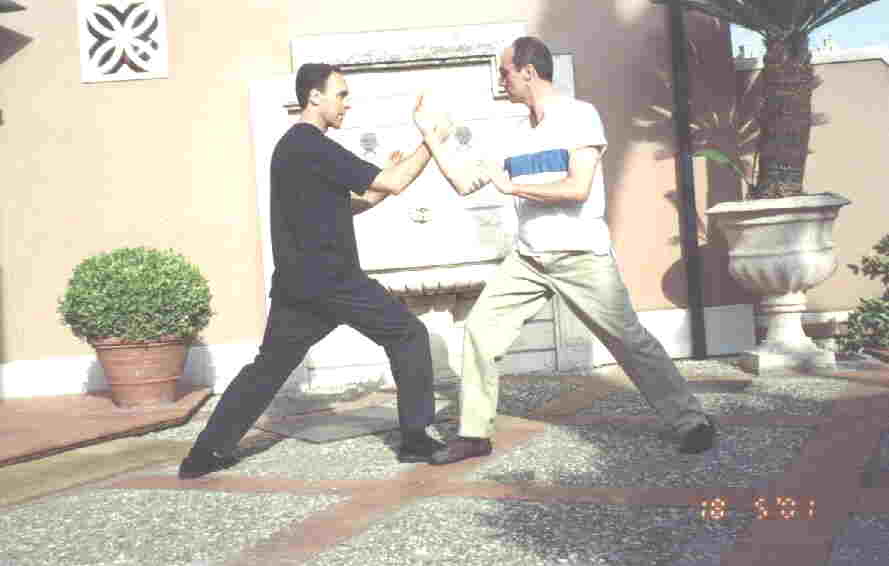 Why is it technically easier to counter-attack an opponent who kicks? There are a few reasons. One important reason is that as he has only one leg firmly on the ground, his mobility is affected. Secondly his kicking position, especially in side kicks and high kicks, makes it more difficult for him to use his hands and other parts of his body (like his head, shoulders and hips) for defence or further attack.

However, while recognizing the innate weaknesses of kicking attacks, you must not under- estimate an opponent who uses kicks, nor conclude that kicking attacks are inferior. For example, although he frequently uses kicks, a Muai Thai fighter is formidable. Why? It is because he has compensated the technical inferiority of kicks with high level skills.

Moreover, there are combat situations where kicks are technically superior. For example, when you have engaged both your opponent's hands, a surprised kick is often the decisive factor for victory.

With these principles in mind, we are now better prepared to learn how to use just one pattern, "Low Stance single Whip", to neutralize virtually any kick. 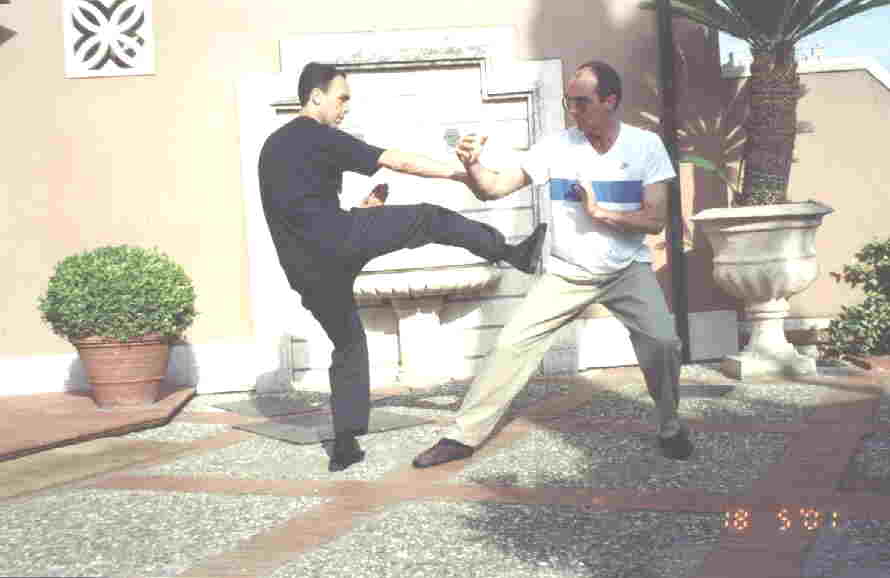 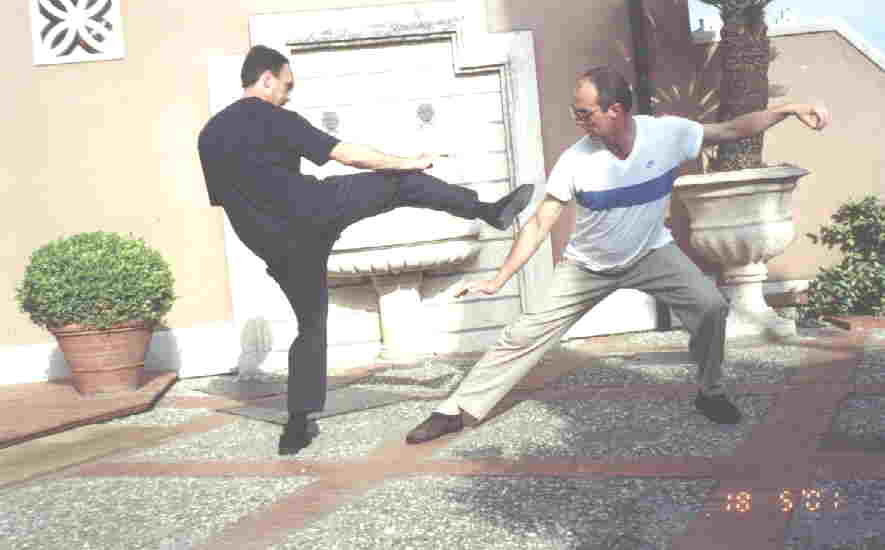 Roberto and Attilio commence the practice with Pushing Hands. When an opportunity occurs, Roberto "tames" or covers Attilio's right arm, rolls-up his left back leg, and and attacks Attilio's abdomen with a right thrust kick. Attilio moves to "Low Stance" to avoid the kick. 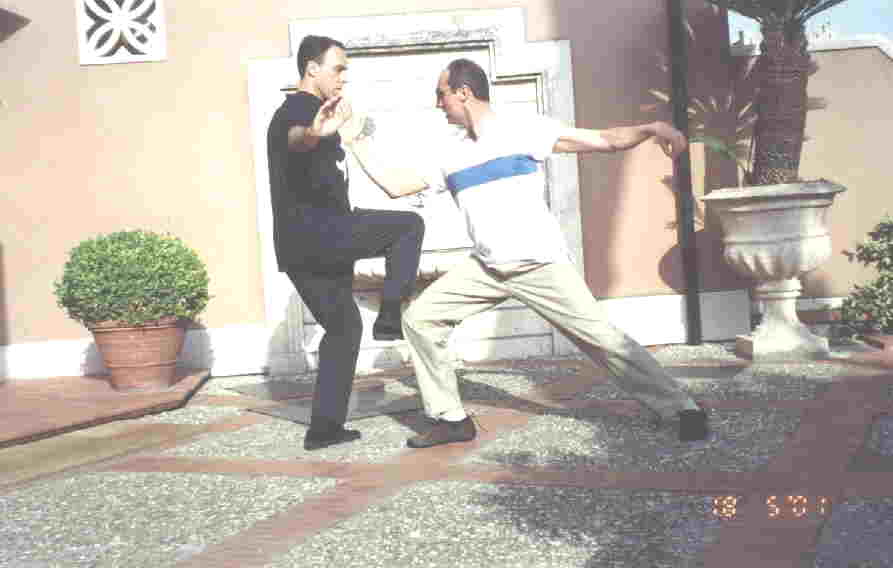 As Roberto brings his leg back after the attack, Attilio moves forward with "Single Whip", striking Roberto's chest. Roberto swiftly drops his kicking leg and rolls back his left leg into the right Bow-Arrow Stance, simultaneously warding off the strike with his right arm. They then resume their practice sequence. 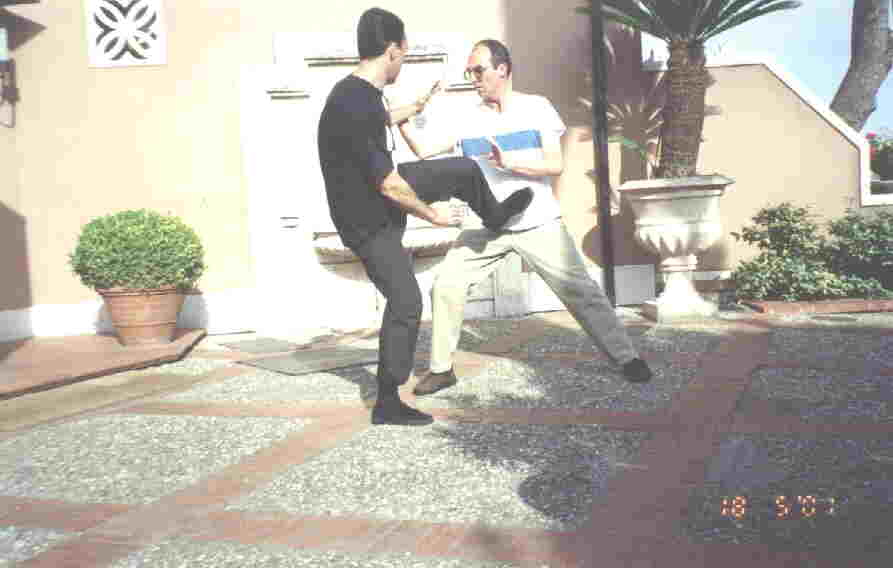 In the second sequence, Roberto uses his left leg to attack instead of his right leg. From the Pushing Hands position, Roberto places his left arm under his right arm and moves it diagonally upward to his left side to "open" Attilio's guard, and simultaneously executes a left thrust kick at Attilio. Attilio again lowers into "Low Stance Single Whip" to avoid the attack. 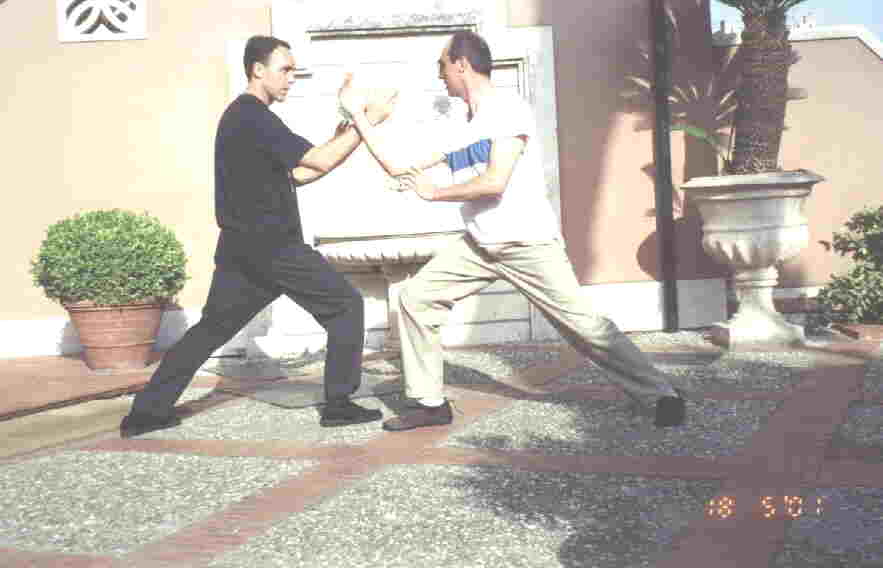 Immediately Attilio shifts his body forward, without moving his feet, and counter-attacks with a palm strike. Robertp retreats his kicking leg and neutralizes the counter-attack with a "peng" technique.

In this series you use "Low Stance Single Whip" to avoid the opponent's kick, irrespective of whether it is a thrust kick, side kick, a high kick, a round-house kick, or any other forms of kicking attack. Then, as the opponent retreats his leg, you moves your body forward to close the gap between you and the opponent and strike him with your palm.

In moving your body forward, your forward movement should not be in line with hour opponent's kicking leg, and you also take care that he does not kick again. If he does so, you can brush away the kick with one hand and strike him with the other hand using the pattern "Green Dragon Shoots Pearl".