LEFT AND BACK ATTACKS
(Getting to the Back of your Opponent) 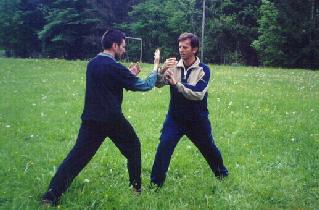 Javier and Riccardo are in the ready position with the "peng" technique. When you are familiar with the right side attack, you can progress to the left side attack as follows. 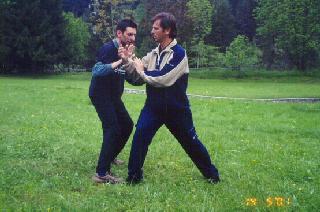 Sensing an opportunity, Javier moves his back left leg a big step disgonally to his left side, and simultaneously closes Riccardo's arms. 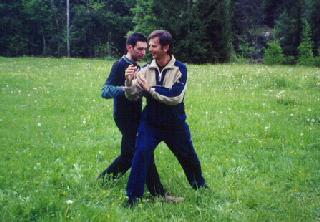 Immediately Javier brings his front right leg a small step forward and in between Riccardo's two legs. As in the right side attack explained in the previous webpage, there is an innate weakness in this forward movement creating a technical advantage. Javier must realize the weakness and be ready to neutralize any attempt to exploit this weakness. 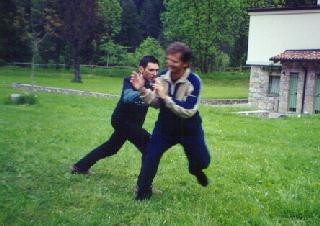 Javier pushes forward, starting the push with his back heel and completing with his palms, and not the reverse. The picture above shows what would happen if Riccardo fails to neutralize the push. 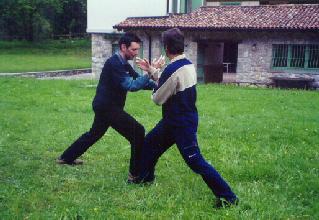 The defence against this left side attack or the back attack is quite simple. As he senses Javier's push, Riccardo moves his left back leg a big step diagonally to his left side and simultaneously turns right.

Notice that in the initial move to effect this left side attack, had Javier moved his left leg further forward he would be attacking Riccardo from the back. Whether he is attacking from the left or the back, in this position Javier has another technical advantage besides a better push. He has minimized the potentiality of Riccardo's striking points.

An exponent can effectively strike an opponent using 17 striking points, namely the head, both shoulders, both elbow, both arms, both fist (including fingers and palms), both hips, both knees, both shins and both feet (including toes and heels). Had Javier faced Riccardo in front or on the right, Riccardo could use more of these striking points.

The left or back attack as well as its defence are shown below in a sequence.

After having practiced the four sequences in these four series, you should be quite skillful in sensing your opponent, letting your energy flow, following the opponent's movements, and leading the opponent often without him releasing. If you are not satisfied with your attainment in these skills, you should spend time revising time.

The same principle also applies in real life. You may know a lot about laws or cooking recipes, but unless you can put them into practice skillfully, you are unlikely to be a successful lawyer or chef. Some people complain that their colleagues or competitors in their profession or business are less knowledgeable than them yet are more successful. What they fail to realize is that their successful colleagues or competitors are more skillful.

Whatever we learn in our training can, and should, be applied wholesomely in our daily work and play to make our lives and other peoples' lives more rewarding. When your Taijiquan training has enabled you to have your energy flowing smoothly, instead of tensing your muscles or emotions, you would perform better whatever you do. Many wives, especially in the East, make excellent use of the skills of following the opponent's movements -- in this case their husband's intentions -- and then leading him (often by the nose) without him knowing, with the result that both the wives and husbands are happy.

Before learning new techniques and skills, you should consolidate what you have learnt. Reviewing the following points taught so far will be useful.