THE TECHNICAL ADVANTAGES OF SHAOLIN KUNGFU 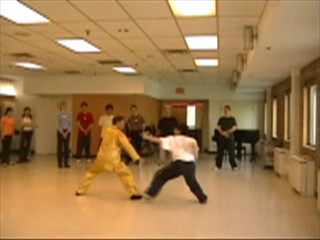 The technical advantages of Shaolin Kungfu

Kungfu is an art, which means that systematic learning and training is essential. Without this systematic training, not only you will be unable to benefit from the many advantages that these kungfu patterns contain, these sophisticated patterns become a liability. You would then punch and kick instinctively, which resembles more of Boxing and Kick-Boxing. 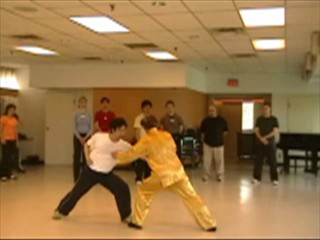 Asking the Way before Striking

You can move in to attack without exposing yourself to an opponent's surprised counter and with the best advantages to yourself. If the opponent executes a surprised counter with his leading hand, brush away or grip and pull him towards you while you sink back your stance without moving your feet, and continue with your planned attack. Notice that here the initiator uses his right hand to ask the way, and his left hand to start his leading attack, which is the reverse of that used in our basic combat sequences like “Black Tiger Steals Heart”. Can you think of the advantages of this reverse manner? 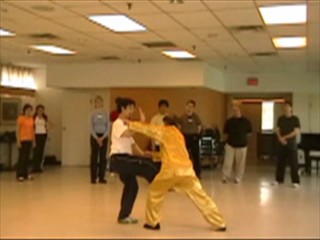 Asking the Way before Striking

In the famous "Art of War", Sun Tzu writes, "Defeat is your offering, victory is your creation." Firstly we must guard against offering our defeat to our opponents. Then we create our victory. You may offer your defeat to your opponent -- something which you must avoid, in combat as well as in real life. Surprisingly many martial artists today frequently commit this grave mistake. However, their opponents often do not realize it and hence do not exploit the free offer. For us, it is not an issue whether our opponents know or can exploit our disadvantage, we do not give away the disadvantage in the first place. 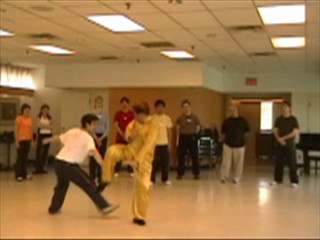 While Attacking, Be Protected and Make Room for Retreat

There is the danger of attacking with unguarded kicks, which are not uncommon amongst Taekwondo, Kick-Boxing and Muay Thai practitioners. Why don't their opponents counter like what Sifu Michael does in the video clip? A main reason is that they are prevented by safety rules to do so. But in kungfu such safety rules which are necessary in martial sports do not apply. In attacking we must not only guard against surprised counters but also make room for retreat. This principle is also important in real life. 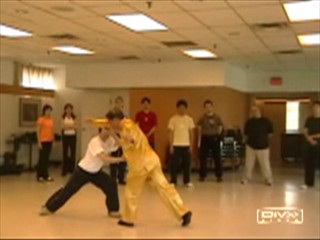 You can use Tantui techniques against a Boxer's attack. Even when a Boxer uses his guard, the way he typically attacks gives you an opportunity to expose him for a counter strike. Often he bounces back to defend against your strike. You may continue striking him, or you may wait for a surer opportunity. As the Boxer attacks again, intercept his attack with a Stretch Fist (see solo Sequence 12), using the tactic of “one against two”, and further expose the Boxer to more counter-strikes. 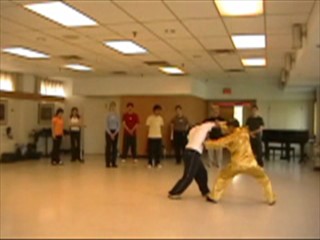 Here the roles are reverse. Use just the start of Combat Sequence 1 Responder's Mode of Tantui against a Boxer's attacks, applying just one pattern, known as "White Horse Returns Head", repeating it accordingly. Notice that the crucial point in the counter-strike is not the hand technique but footwork. The movements, which are spontaneous, are purposely slowed down to enable the course participants to see more easily.

Just One Pattern against a Boxer's Attacks

Would you believe that you could use just one pattern against an opponent who attacks you using a variety of Boxing techniques? This video clip, which is a continuation of the previous one, shows how this can be done. The one pattern is “White Horse Returns Head” which is found in a few of the Tantui solo sequences, and in the responder's mode of the first Tantui combat sequence. Please be reminded that the effectiveness of this pattern is not just in its hand technique but in its footwork and body-movement. In other words, even if you know this technique well, but if your footwork and body-movement are poor, you would be ineffective against a Boxer. 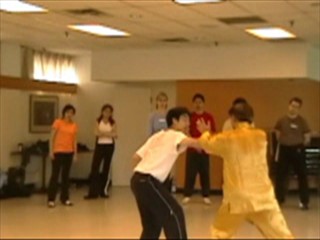 The Technical Speed of Kungfu Strikes

A Boxer is fast. This is due to his high-level skills. But if we leave aside other factors and consider only techniques, a Boxer's techniques are slow! In contrast kungfu techniques are fast. For convenience we call this "technical speed". A Boxer's powerful punch comes from his shoulder, traveling about 2 to 3 feet to reach an opponent. A kungfu exponent's strike using internal force comes from his hand which is often held close to an opponent, traveling about a foot to reach him. 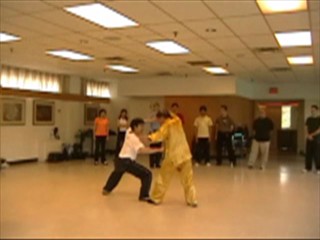 The Technical Speed of Body-Movement in Kungfu

In kungfu, besides the advantage of technical speed in strikes, there is also the advantage of technical speed in footwork and body-movement. If you attack, then bounce back to avoid a counter-strike from your opponent, and then bounce in again to attack, you are technically slower than a kungfu exponent who uses body-movement without having to move his feet. He will be ready to strike you as you move in for a second attack, as shown in this video clip. 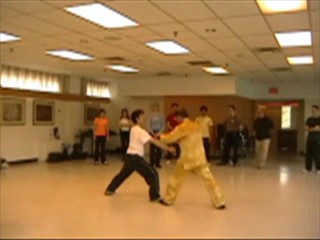 The Advantage of Body-Movement over Bouncing About

Here is the superiority of technical speed in kungfu when counter-attacking an opponent. If you bounce away when an opponent attacks, then bounce back to strike, you will be technically slow. It will be technically faster if you shift your body backward while deflecting his attack, then shift forward immediately to counter-attack. Here we consider only from the perspective of techniques. If a Boxer is skillful, although his techniques are technically slower, his actual attacks may be faster than your defence if you are less skillful. 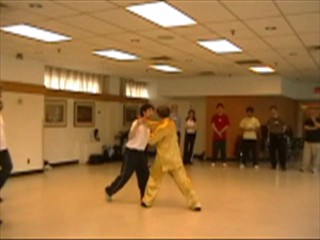 The Advantage of Kungfu Techniques over other Martial Arts

If we leave aside other factors and consider only techniques, Kungfu is more advantageous than Boxing and all other martial arts. This video clip gives some examples not only of the superiority of kungfu in technical speed, but also in striking targets (like the groin) and using parts of the body for attack (like the foot) where other martial artists are not used to because they are forbidden to do so by their safety rules. But this does not mean that a kungfu exponent will necessarily beat an opponent of other martial arts. Have no illusion that despite his relatively inferior techniques, if he is skillful, a Boxer, a Kick-Boxer or a martial artist of any styles can readily defeat a kungfu exponent. 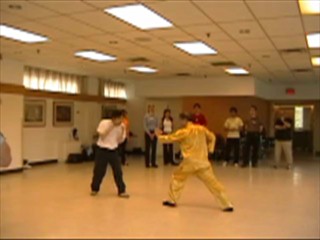 The Advantage in Footwork

Moving in stances is technically faster than bouncing about. A Boxer needs to bounce away or forward twice where you can cover the same space in just one step using the Bow-Arrow Stance. Presuming that both of you are equally skillful, you are about twice as fast as a Boxer in your moving in to attack, or retreating from an attack. When a Boxer bounces away from your attack, you need just one step to go right into him. On the other hand, when you retreat you need just one step to create a space which a Boxer would need two steps to cover. 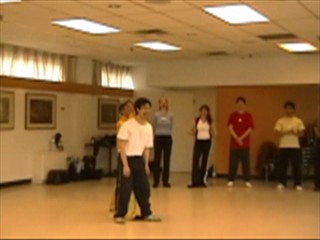 Where has the Opponent Disappeared to?

Some attacks appear fast because the movements are flashy but they are actually slow. Round-house kicks and reverse round-house kicks are two examples. You can easily get behind the back of the attackers using such kicks often without their knowing. You don't even have to rush. You can move leisurely because technically if it takes 4 seconds to execute a round-house kick, it takes only 1 second to move to the attacker's back by following his momentum. 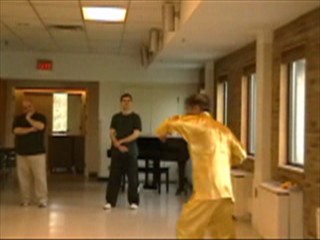 Training in Shaolin Wahnam is full of Fun and Laughter

Training in many martial art schools is normally full of tension and aggression, but in Shaolin Wahnam it is always full of fun and laughter. Concerning technical speed, Grandmaster Wong retold his experience a few years ago teaching Taijiquan. One of the students was an army commander who was also a former national Karate free-sparring champion. Doubtful as to whether the slow, gentle movements of Taijiquan could really be used for fighting he asked Grandmaster Wong for a test. He gave a feint move than swiftly turned around to execute an elbow strike. But to his utter surprise he found Grandmaster Wong had disappeared! Grandmaster Wong then gently tapped his head from behind, drawing much laughter from the listeners.

Technical Advantages of Shaolin Kungfu in Combat from Wong Kiew Kit on Vimeo.