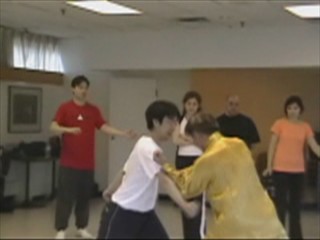 Where does this pattern, "Old Elephant Drop Tusk", come from?

An important advice Grandmaster Ho Fatt Nam gave to Grandmaster Wong was that kungfu was alive. The combat sequence illustrated in this video series is a manifestation of this advice.

If you have wondered where the pattern you employ to intercept an opponent's swinging fist, comes from, it is from Solo Sequence 2. Indeed the whole of Combat Sequence 2 is a direct unfolding of Solo Sequence 2 except that you hold your left hand in transition before bringing it back to your waist, and turn your body to align with the opponent as you hang your other fist and kick with your right leg.

As your opppenent swings up a fist, you intercept it with your bent arm and simultaneously execute a thrust punch, which strikes the opponent at the time when the opponent thinks he has made a hit! 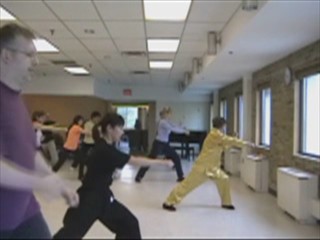 How Combat Sequence 2 is derived from the Solo Sequence 2 is demmostrated. In the solo sequence the left hand is brought back to the waist as the right fist is punched out. In the combat sequence it stops in transition to form the bent arm block. 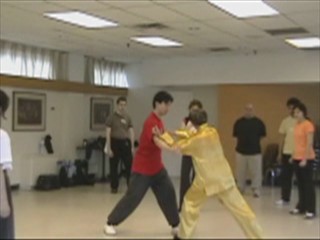 You should adjust the bent-arm block according to the height of the attack. This pattern is known as “Old Elephant Drops Tusk”. 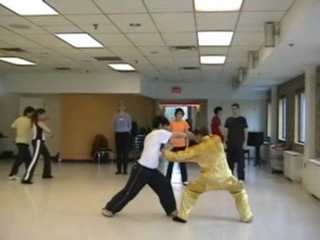 As your opponent applies "Elephant Drops Tusk", you sink back to a Horse-Riding Stance, brush of the strike and counter-strike with your hand, using a pattern known as "White Horse Returns Head". 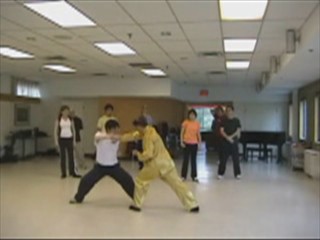 What would you do if your opponent grips your hand and simultaneously strikes you? You could not move back easily as he is pulling you. One effective counter is to move diagonally forward with the pattern “Rising Dragon Jumping Tiger”. The circulating movement of your hand will release his grip, and you strike his head and kick at his groin at the same time. 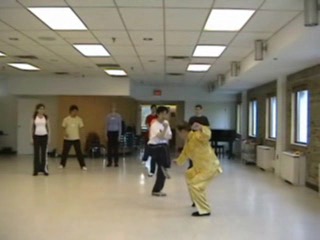 Avoiding Top and Bottom Attacks at the Same Time

How would you defend against a double attack, one on your head and the other at your groin. Move a step back and strike the kicking leg using the pattern “Striking Tiger Poise”. Your moving back will avoid both his top and bottom attack. This concludes Combat Sequence 2.

Familiarizing with the Combat Sequence

Participants practice the combat sequence they have just learnt. In the foreground are Sifu Gordon and Joe. Why are they performing slowly and not using force? It is because the main aim of this practice is to familiarize themselves with the sequence. Speed and force can come later.