HOW WOULD YOU DEFEND AGAINST A VERSATILE THREE-SECTIONAL STAFF? 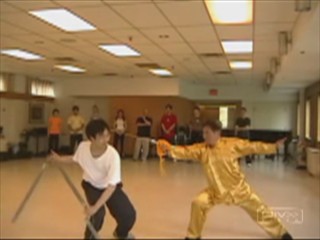 The three-sectional staff is probably the most versatile of all weapons. It can be used as a short weapon, a long weapon, a light weapon, a heavy weapon, a single weapon or a double weapon!

Also, you cannot block or deflect a “soft” weapon like a three-sectional staff or a soft whip like you do to other “solid” weapons, because being “soft” it just warps round your weapon. When you opponent sweeps at you with a three-sectional staff, for example, if you block at the first or second section of the weapon, the third section would wrap round to hit you. If you block at the third section, the second section would bounce in to hit you.

So, how would you defend against the versatile three-sectional staff?

If you move back to avoid a downward hit, a skillful opponent may change his attack from two sections of his weapon to three sections, thus still reaching you. But if you are skillful with your sword, you can control your opponent's weapon irrespective of how he uses it.

Sifu Michael Chow uses a variety of techniques with his three-sectional staff to attack the swordsman, who counters each attack compassionately, merely slicing the opponent's arm or body, thus not causing serious injury.

Slicing open the throat or the kidney, however, can be fatal. Thrusting the sword into an opponent's body, which actually is a main attacking technique of the sword, is deadly.

Agility is the hallmark of a swordsman. What happens if an opponent attacks the root of your agility, i.e. your legs. If he is very skillful with his three-sectional staff, he can reach you wherever you try to move to.

Also it is futile to block his attack, because being versatile the weapon can bounce off your block and still hit you. Here is an ingenious counter using the pattern poetically called “Dagon Fly Dots Water”.

Here Sifu Michael Chow uses the three-sectional staff like double rods. A long, “soft” weapon has now become a pair of short, heavy weapons. The downward smashing attacks of double rods applied continuously one after the other are very formidable.

If you block the attack with your sword, it will be smashed into pieces, while the other rod would smash onto you. How would you counter such attacks?

The three-sectional staff is a very versatile weapon capable of different and varied attacks, and Sifu Michael Chow is very skillful at using it.

But he swordsman frustrates his every attack, illustrating the amazing techniques of the Traveling Dragon Sword. Of course, great skills are needed besides the techniques.

The Versatility of the Three-Sectional Staff

The great skill of Sifu Michael Chow in using the three-sectional staff is evident in his applying the weapon in a great variety of ways according to the combat situation in question as well as to confuse the opponent.

Do you notice that Sifu Michael Chow has used his weapon in one section, in two sections as well as in three sections within a short space of a sequence? This feat is the more admirable when all these movements are impromptu.

How to Control a Heavy Weapon with a Light Weapon

Now Sifu Michael Chow holds the three sections of the staff together and use them as one heavy weapon. It is illuminating to see how the swordsman uses a light weapon to control a heavy weapon.

Notice that the same combat principles can also be used against a powerful Samurai sword. As usual, laughter is frequent in any Shaolin Wahnam training sessions.

How would You Defend against a Three Sectiona Staff with a Dainty Sword from Wong Kiew Kit on Vimeo.