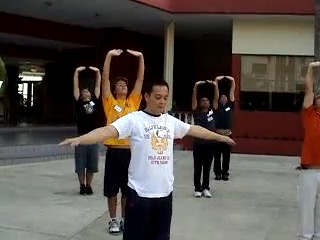 To practice genuine chi kung, practitioners must enter into a chi kung state of mind

What is genuine chi kung and what is gentle physical exercise? Don’t you think many other people will be angry at what you say?

Today most chi kung practitioners practice gentle physical exercise using chi kung techniques but not genuine chi kung, and they are not aware of the fact. As an analogy, most Taijiquan practitioner today practice the external form of Taijiquan, which we call Taiji dance. Taijiquan is a wonderful internal martial art, but there is nothing internal, and nothing martial in what most people practice.

It is understandable if many of them are not happy to hear this, and some of them may be angry. But I am just telling the truth. That is the reason why many practitioners are still weak and sickly despite having practiced for many years. The onus is that although they have the right techniques, they do not have the skills to practice the techniques as chi kung. Hence they only perform the external form, which is gentle physical exercise.

To practice genuine chi kung, a practitioner must enter into a chi kung state of mind. There are various levels of mind, but the most important is to be relaxed and focused at the same time. In other words, if a practitioner is relaxed and focused at the same time, he practices chi kung. If he is not relaxed or not focused, he merely performs gentle physical exercise although he uses chi kung forms.

Chi kung state of mind, or “qigong zhuang tai” in Chinese (Mandarin) is a modern term, first coined by the great chi kung master of China, Sifu Yan Xin. In the past it was called entering silence. In Western culture it is entering into a heightened level of consciousness. If a practitioner has not entered into a chi kung state of mind, or has not entered silence, he may use chi kung techniques but he is only performing gentle physical exercise.

Your thoughts on training beyond 100 days in iron palm iron body external training not necessarily to break real bricks? What chi kong?

The usual English spelling is "chi kung", not "chi kong". In Romanized Chinese, which is in Mandarin pronunciation, it is "qigong", but is pronounced as "chi kung" and not as "ki gong".

Both "Iron Palm" and "Iron Shirt" is chi kung. In other words, one should practice Iron Palm or Iron Short as chi kung, and not as gentle physical exercise. In hitting a sand-bag when training Iron Palm, for example, a practitioner should relax his arm and be focused on what he is doing. If he is tensed or if he is distracted, he will not attain Iron Palm.

There are many different types of chi kung, as well as different levels of teachers in teaching efficiency. When training Iron Palm or Iron Shirt, it is beneficial to practice a type of chi kung called Self-Manifested Chi Movement. The chi flow in Self-Manifested Chi Movement will clear away any injury sustained in the training. If there is no injury, the chi flow will enhance the training.

Many people who train Iron Arm and Iron Short may not know Self-Manifested Chi Movement or other suitable types of chi kung. They should use Chinese medicated wine, or "tit-ta-jow" in Chinese (Cantonese). If a practitioner does not use "tit-ta-jow" or Self-Manifest Chi Movement, or an appropriate type of chi kung, the injury sustained in the training will be left unattended too, and will insidiously affect his health, vitality and longevity. 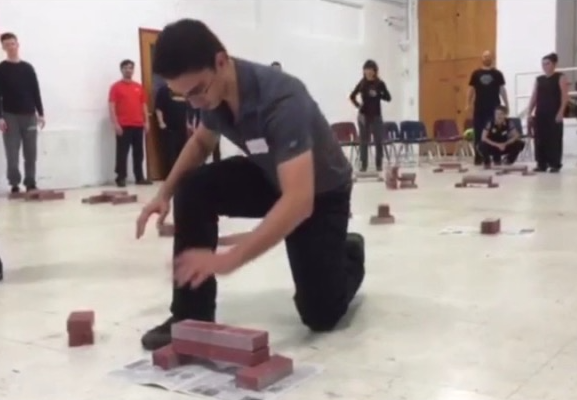 Also do you yourself still do external iron palm and body at your age now?

However when I learned "One-Finger Shooting Zen" from Sifu Ho Fatt Nam, I could break a brick after a few months. Later, Sifu Ho Fatt Nam taught me Cosmos Palm, which tapped energy from the Cosmos and which is more advanced than Iron Palm. In some schools, Cosmos Palm is called "Red Sand Palm".

Many instructors and senior students of our school can break a brick without training Iron Palm or Cosmos Palm. You can see them breaking bricks at Brick-Breaking Galore. In 2016 I taught Golden Bell in Finland. You can see a video here.

I seldom practice Iron Palm and Iron Shirt now. Nevertheless, the internal force one has developed, remains with him if he only trains occasionally, not necessary in the particular training of Iron Palm and Iron Short but general chi kung training. This is one of the wonderful benefits of practicing genuine, high-level chi kung. I believe that I can still break a brick easily and if my defence fails, I can stand punches and kicks without sustaining injury.

Bernhard’s questions, which appeared in our Shaolin Wahnam Discussion Forum, are very interesting and there are many interesting answers in the Forum.

Here are my answers.

Whether kungfu is mainly for destroying depends on the practitioner. For us in Shaolin Wahnam, the main purpose of practicing kungfu is to enrich our lives and the lives of other people. I am glad that our Shaolin Wahnam kungfu practitioners are healthy, full of vitality, have longevity, have mental clarity and spiritual joys.

"Wushu" as most Westerners know it today is a magnificent demonstrative art. There is no combat training, no internal force training and no spiritual cultivation. But “wushu” in Chinese means “martial art”, or what is understood in the West as “kungfu”.

As there is no training for combat efficiency in wushu, I would not even call it fourth-class kungfu. Nevertheless, what many kungfu practitioners practice today also does not involve combat efficiency. They only practice kungfu forms, and if they have to spar, they would borrow techniques from other martial arts.

I am proud that any style of kungfu practiced in our school, Shaolin Wahnam, is first class. It is not just a wild claim; it can be easily verified from experience. Our kungfu students are combat efficient, healthy, and peaceful and happy.

Kungfu if practiced correctly is at least second class. It provides combat efficiency and good health. Unfortunately, many kungfu practitioners today do not even know how to apply their kungfu for combat.

There are benefits of training third class kungfu. It may, for example, save your breakfast from being snatched away.

Chi flow will contribute to good health, vitality and longevity. It will at least make our kungfu second class if we also know combat. However, if we just have chi flow but do not know combat, like our chi kung students, we cannot even call it third class kungfu.

If our chi flow contributes to our spiritual cultivation, like making us happy and peaceful, our kungfu becomes first class. 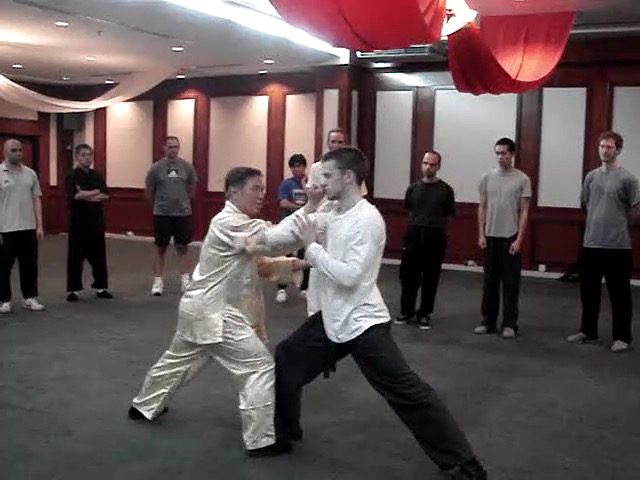 What is first class kungfu?

What would be the sequence of the "moving" and the "still" exercises?

Similarly there is no hard and fast rule about practicing "moving" and "still" exercises one after another, with a break in between or on alternate days. Generally, if a class is short, like 5 minutes, it is better to perform either a "moving" exercise or a "still" exercise; if the class is long, like an hour, you can have a mixture. The important thing is that students enjoy the class and benefit from it.

Flowing Breeze and Standing Zen are usually practiced at the end of the whole session. 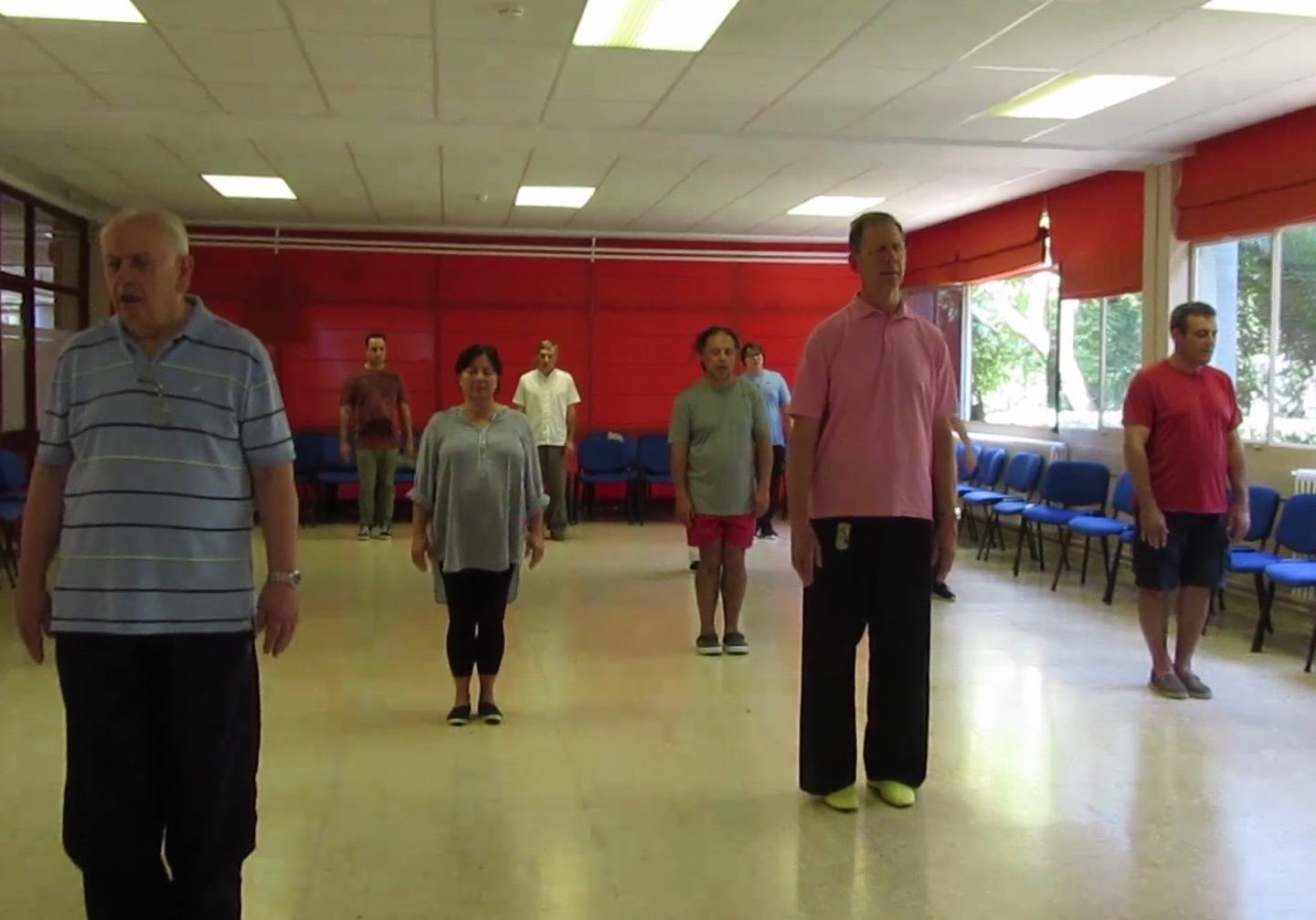 If you want to soar to the height of kungfu and chi kung, you must practice meditation

My current training regime is daily "Iron Wire Set" training for the last 1.5 years. I have enjoyed it very much and can feel the huge transformation.

Relatively recently, I have included sitting mediation in my own practice, and I have to say it improved my "Iron Wire" (as well as everything else) tremendously.

For you at a master's level, it is easy to perform the whole set of Iron Wire, but your students must progress gradually taking care not to over-train.

A noticeable hallmark of an isometric exercise is to develop big muscles, and that of chi kung is vitality and feeling of being peaceful and happy.

Although I may practice different qigong sets or different techniques, the principles, skills, and the overall system of qigong exercises I have learnt from you is the best I have ever seen. Hence I would recommend your courses to anybody who practices any form of qigong, regardless of style or lineage. Thank you again.

Thank you for your kind comments. It is much appreciated.