This course is meant to train you to think and act as a Shaolin master. Certainly it is not an easy course, and hard work is required. But as is normal with all our Shaolin Wahnam courses, there is a lot of fun and benefits.

You will have some idea of what to expect by viewing What You Learn at the Special Shaolin Kungfu Course and How to Think and Act as a Master.

Participants need to choose one of the following sets for specialized training. The following video clips are provided to help you learn the set.

To facilitate easier learning and downloading, each kungfu set is divided into convenient sections. Pay attention to theSix Harmonies when practicing your chosen set, namely the three external harmonies of body, hands and feet, and the three internal harmonies of jing, qi and shen (essence, energy and mind).

Learn the set as best as you can so that by the time you attend the Special Shaolin Kungfu Course you will have familiarized yourselves with the order your chosen set is performed. Fine points of the set, which are difficult to be shown in texts or videos, will be taught to you during the Course.

The "Dragon-Tiger Set" and the "Five Animal Set" are described in my books, "Introduction to Shaolin Kungfu" and "The Art of Shaolin Kung Fu" respectively.

You will also have to devise appropriate combat sequences for your chosen set. You can go about this task as follows:

This construction of your own combat sequences constitutes an important and valuable aspect of the Special Course. Improvement as well as the philosophy for your composition will be discussed and taught during the Special Course.

The series of videos at What you Learn at the Special Shaolin Kungfu Course Part 1 to 12 will be an invaluable sourse of assistance. 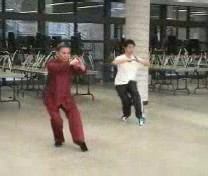 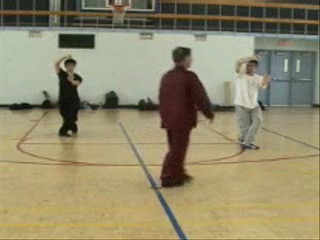 The "Tiger and Crane Double Form Set" is a famous kungfu set in Southern Shaolin. There are many versions of this set. The most widely practiced version consists of 108 patterns and is passed down by the great Shaolin master Wong Fei Hoong, whose lineage led back to Lok Ah Choy who was an inner-chamber disciple of the Venerable Chee Seen, the First Patriarch of Southern Shaolin Kungfu. The one practiced in our school consists of only 36 patterns, and was transmitted by the Venerable Yarng Yein, a senior classmate of Lok Ah Choy.

Although this set is short, it incorporates all the four categories of attacks and their defences. Except for the salutation patterns at the beginning and end of the set, all the patterns are different, and they are linked together individually. Hence, it is essential to understand how these patterns are used in sequences. The patterns may look complicated or flowery to the uninitiated but are actually very effective for combat. The specialized arts related to this set are "Tiger Claws" and "No-Shadow Kicks." 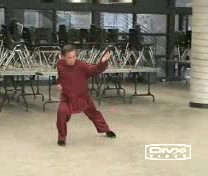 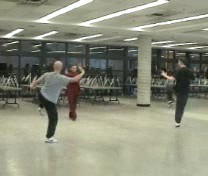 Kungfu sets are composed according to some main principles. Unlike the "Tiger-Crane Set" where each pattern in the set are different from one another, here in the "Dragon-Tiger Set" some patterns are repeated and some are individual, and some are linked in a meaningful sequence for combat. At the beginning of the set, the pattern is meant for developing internal force for the art of "Two-Finger Zen" or "Dragon Hand Form", which is effective for dotting vital points. 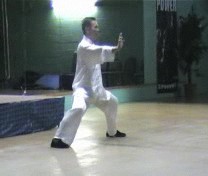 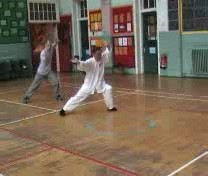 Shaolin Kungfu, especially Southern Shaolin, is characteristized by the Shaolin "Five Animals" of "Dragon", "Snake", "Tiger", "Leopard" and "Crane". These "Animals" symbolize the outward forms as well as inner signifances of Shaolin training and application.

The "Dragon" trains mind, the "Snake" trains energy, the "Tiger" trains internal force, the "Leopard" trains speed, and the "Crane" trains essence. Being aware of these significances enables us to get much more benefits from our training, and reminds us of the profundity of Shaolin Kungfu. We are aware, for example, that our training does not only give us good health and combat efficiency, but among many other benefits, also cultivates our mind (the "Dragon" significance) and enable to be elegant in our daily performance (the "Crane" significance). 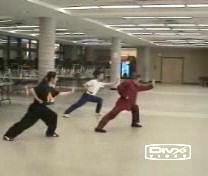 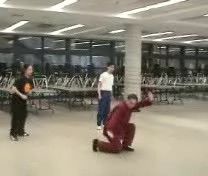 The "Dragon" is the most majestic of the Shaolin "five animals". The "Dragon" trains "mind", which includes the emotional and the spiritual.

The "Dragon" patterns are characterized by swerving body movements, which are very effective for both attack and defence. Internal force is very important in the Dragon Form Set. A master with "Dragon Force" may be able to injure an opponent using any part of his body! More significantly "Dragon Force" gives its practitioners mental freshness, vitality amd longevity. 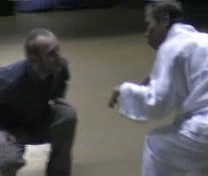 The "Monkey" is well known for its agility and trickiness. Do not be deceived by the apparent "soft" movements of a Monkey kungfu exponent. As internal force is an essential aspect of Monkey kungfu, its exponent can be very fast and powerful, thought their movements may appear gentle.