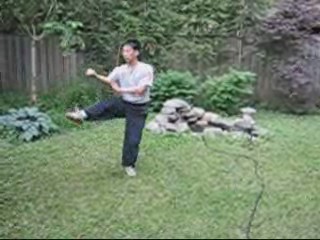 Tantui or "Spring Kicks" is a style of Northern Shaolin. There are altogether only twelve sequences in this style, but these twelve sequences are sufficient to meet any combat situations! They are also effective for developing internal force.

In other words, Tantui is a complete martial art. A Tantui stylist does not need to borrow from any other martial arts to supplement his training. These twelve sequences constitute adequate training material for him to have good health, vitality, longevity, combat efficiency, mental clarity and spiritual joys!

Of course, if a Tantui student only practices the external form of the twelve sequences, as most Tantui practitioners today do, he will only have beautiful forms for demonstration. He may not obtain any of the wonderful benefits mentioned above. He has missed the essence. The essence of Tantui, or of any great kungfu, is internal force training and combat application.

Grandmaster Wong has distilled the combat applications of Tantui into twelve combat sequences accessible here and here. These twelve combat sequences are linked together to form four combat application sets, with three sequences to one set, as follows. For convenience, each set is named after its poise pattern. The four sets are demonstrated slowly by Sifu Michael Chow, an international wushu champion, to enable students to observe the movements more easily.

The uninitiated may be unable to see how these seemingly flowery patterns can be used for combat, but can you tell their combat functions by watching Sifu Michael's performance?

This set is composed of the first three combat sequences, namely "Second Brother Offers Wine", "White Horse Returns Head" and "Second Brother Chops Wood". In many ways it is the most useful set for students to be combat efficient because any one of the three combat sequences, if employed skillfully, can be used against any forms of attack. In practical terms, if you know the combat applications of the three sequences and practice this set daily for a year, you should be able to spar competently with any ordinary opponent. 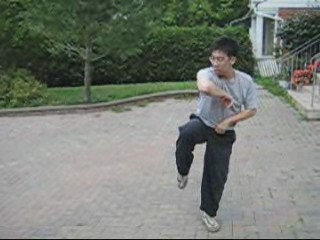 The three combat sequences that constitute this set are "Green Dragon Exhibits Tail", "Crossroad Lift Strike" and "Embrace Moon in Bosom". The set contains some excellent counters against elbow strikes, knee strikes and whirlwind kicks. The first sequence of the set, which is the fourth of the twelve Tantui sequences, is the most complicated and requires much skill to perform it well. Some interesting secrets are hidden in the open in this set. Have fun finding them. 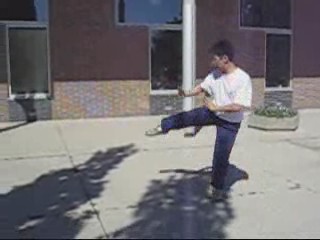 The pattern "Actor-Warrior Appears on Stage", which is the poise pattern for this set, is similar to "White Crane Flaps Wings". However, in the performance here Sifu Michael Chow uses "Lift Lantern Lead Way" as the poise pattern. The three sequences which form this set are "Single Strike Bell Sounds", "Shoot Spear at Yun Pavilion" and "Second Brother Breaks Lock". It may sound exaggerated, but if you have mastered this set, especially the sequence on breaking locks, you can counter any holds and locks. 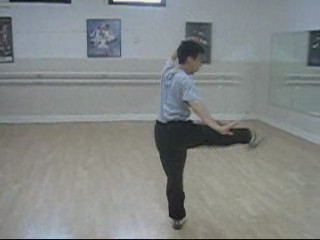 This set is composed of the three sequences, "Swallow Flies through Clouds", "Arrest Horse at Cliff" and "Turn Body Strike Rock", which are the last three of the twelve Tantui sequences. The set provides instructional material for pressing attacks, felling techniques as well as how to get to the back of an opponent. The performance here as well as in the other three sets is purposely slowed down and paused at individual patterns to enable you to watch the patterns more easily. When you are familiar with the patterns, they should be performed in a smooth and fast manner.