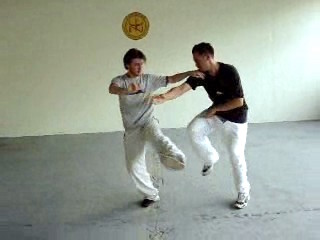 Dominic and Christian practicing a combat application of Shaolin Tantui

Tantui is considered by many as the essence of Northern Shaolin Kungfu. Hence, the great master, Huo Yuan Jia, acted by Jet Li in the movie film “Fearless”, made it the fundamental (meaning most important) set in the Chin Woo (meaning “Essence of Martial Arts) Association that he founded where many other kungfu styles, like Praying Mantis, Eagle Claw, Hsing Yi Kungfu and Taijiquan, were taught.

There are literally tens of thousands of people practicing Tantui today. But what is practiced is only the external forms. How to apply Tantui to manifest internal force as well as for combat is almost never taught. Hence, our doing so at the Intensive Shaolin Kungfu courses in Toronto, Frankfurt and Canterbury recently will help to preserve and spread this wonderful legacy of our Shaolin arts.

The video clips below show the 12 Tantui combat sequences, with each combat sequence highlighting some main techniques in each of the 12 solo sequences. The performers, Christian, Dominic and Adrian, are all students of Grandmaster Kai Uwe Jettkandt of Shaolin Wahnam Germany.

They had learned the combat application from Grandmaster Wong just a day or two before the videos were recorded. Their rapid learning and excellent demonstration is an inspiration for us. You can find the 12 solo sequences here, and the 4 combat-sequence sets which the 12 combat sequences below constitute here.

Please click the pictures or the captions to see the videos 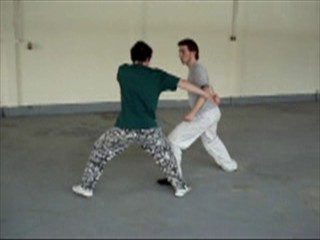 Dominic initiates the attack using solo Tantui Sequence 1, which amazingly can be applied against any opponent using any attack or defend techniques! The video clips here show how you may use this sequence against Boxers and Kick-Boxers. Adrian responds with “White Horse Returns Head” from solo Tantui Sequence 2, and "Strike Tiger Poise" from Sequence 8. "White Horse Returns Head" is also an excellent counter against Boxers. 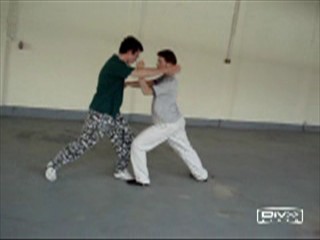 Dominic initiates with solo Sequence 2, which consists of the patterns “White Horse Returns Head”, "Bow-Arrow Thrust Punch" and "North Star Kicks Bushel". Adrian responds with Sequence 1, supplement with "White Horse Returns Head". Notice the “elbow block” that Dominic uses in his second attack, is actually in "Bow Arrow Thrust Punch" but he emphasizes it in this counter. 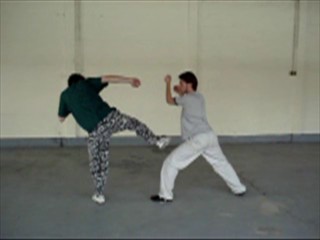 Dominic initiates with solo Sequence 3, which incorporates a famous but little understood combat tactic known as “feng che quan”, or “windmill fists”. A useful pattern to execute this tactic is “San Wan Tao Yue”, or “Three Rings Around the Moon”, which Dominic uses in his counter against Adrian's kick. Sequence 3 is excellent against opponents who use any kicks, especially Taekwondo exponents, Kick-Boxers and Muay Thai fighters! 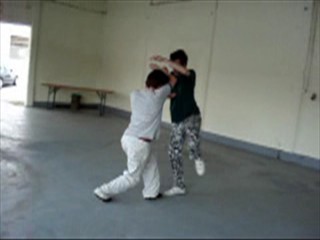 This is a complex sequence and it needs much skills to perform it well, but it incorporates useful counters against kicks, knee jabs and elbow strikes, attacks that Muay Thai fighters often use. It also incorporates some exotic kicks and their amazing counters, which are actually shown here but not readily noticeable. Can you find out what these exotic kicks and amazing counters are? 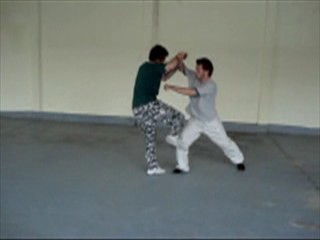 This is another combat sequence which contains some fascinating moves that may not be noticed by untrained eyes. The spontaneous elbow and knee strikes, often used by Muay Thai fighters, are readily noticeable if you observe more closely, but can you work out what the counter against these two simultaneous attacks is? It is so simple, yet so profound. 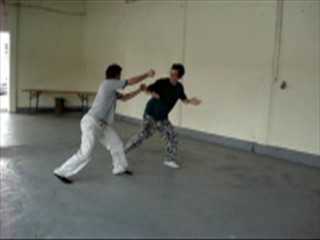 Here is another sequence that hides secrets in the open. Do you know what these secrets are? There are actually quite a few of them. Here are some clues. Why and how does Dominic use the “double spread”, i.e. double punches one above the other? What is so special about Dominic's counter against Adrian's kick? And how does Adrian counter Dominic's kick? 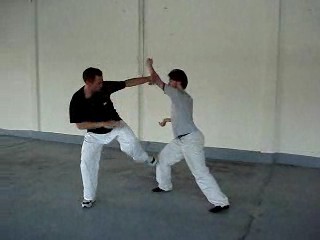 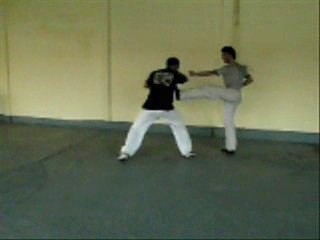 Another secret is hidden in the open here. Do you know what it is? It involves a tricky use of tactics. The incredible point is that it can be used against an opponent almost irrespective of how he attacks you! 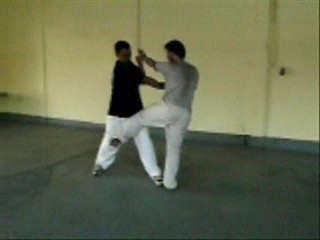 Although this sequence looks simple, it can be used to break almost any locks, and counter-strike an opponent with a sophisticated triple-attack. The response to this triple attack is amazing too. These fine points, however, may not be obvious to the uninitiated in the video clip here because the combatants neutralize the attacks successfully. 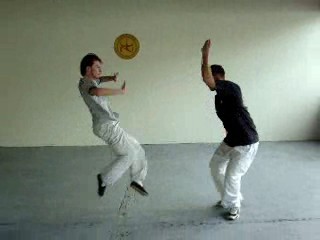 Dominic uses this sequence in pressing attacks against Christian. He uses three continuous strikes and two continuous kicks, almost irrespective of how an opponent reacts. Christian tries to force back a counter, but is frustrated by Dominic who continues his planned attacks. 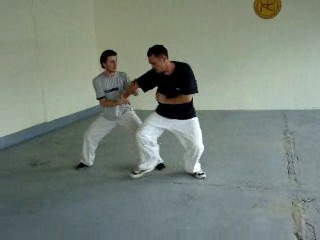 This sequence incorporates a counter against a double hand grip. Dominic grips Christian's arm as he attacks. Christian counters with a Stretch Fist. Dominic moves to Christian's back and strikes,

You can also view the 12 combat sequences collective below. Please click on the picture to video the video here or on click on the caption to view it at Vimeo.

12 Combat Sequences of Tantui from Wong Kiew Kit on Vimeo.

We would like to thank Irina and Anton, both from Shaolin Wahnam Germany for providing these video clips.

Tantui, the Essence of Northern Shaolin