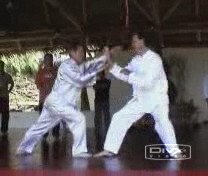 Many people, including the participants themselves, were amazed that one could use typical Taijiquan skills and techniques to spar, without resorting to bouncing about and freestyle fighting, after just five days of training at the Shaolin Wahnam Centre in Costa Rica in February 2005, especially when some of the participants were new to Taijiquan and other martial arts. A series of impromptu video clip showing the sparring practice can be accessed at How You could Apply Taijiquan for Combat.

The course participants were also very pleased that not only they were not injured at all in the sparring, but also they were not panting for breath or tired after sparring for a few hours! More significantly, they found the training full of fun and laughter, vastly different from the “ability to take punishment” concept many people may have regarding sparring. Most significantly, they found the training a rewarding experience, which it should be, where they learned how to be relaxed even in demanding situations, to regulate their use of energy effectively, and to make quick, correct decisions.

What were the secrets of their success? How could Taijiquan practitioners, some of whom were new to the art, spar reasonably well after just five days of training? One important reason was that they spent time training the basics.

“Training the basics” may be interpreted differently by different schools and people. To some, it may mean practicing Taiji forms, to others jogging, push-ups and hard-conditioning.

To us in Shaolin Wahnam, training the basics involves the following:

Our explanation is as follows. To us, “basic” means fundamental or very important, the foundation upon which all future development will depend. Therefore we teach the “basics” at the very beginning so that our students will be cost-effective as they continue their learning and practice with us, with other masters or on their own.

Secondly, there are different levels of attainment in the basics. A beginner and a master may perform the same exercises for Entering Tao and Chi Flow, but their results will be vastly different. Masters also spend a lot of time on basics in their own training.

Another very important point to bear in mind if you wish to have good results, is that “training the basics” does not mean merely going over the mechanics of the basic exercises. But it means that you have to practice and practice the exercises correctly and sufficiently so that you can experience the benefits those exercises are reputed to give.

For example, in stance training, it is not merely learning the external form of the various stances, but practicing them correctly and sufficiently so that you can feel some internal force, which is the major reason for stance training. Of course, the internal force developed in a few days, even if the training were excellent, is not much, but it should be sufficient to convince you that it is real and that if you continue training you are certain to get more benefits.

Originally this section of the website is meant for providing review webpages for our Shaolin Wahnam members. But as part of our effort to share with those who believe in our philosophy and methodology, even though they may not learn personally from us, we shall release a series of video clips to show what we did in our basic training at the five-day Wahnam Taijiquan class in Costa Rica in February 2005. The videos were taken impromptu, without prior preparation nor editing. 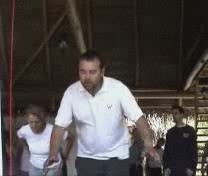 Chi (qi) or energy is the essential aspect of Taijiquan. Without this aspect of chi, Taijiquan will be ineffectual for promoting health, combat efficiency and spiritual cultivation — the three reasons why genuine, traditional Taijiquan is devotedly practiced. Note: if people, especially the elderly, practice gentle external Taiji forms for recreation and socialization, that is beneficial too, though we would not consider it as genuine, traditional Taijiquan. 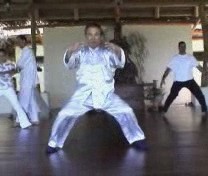 "Zhang zhuang", or stance training, is the single most widely used method to develop internal force in kungfu, including Taijiquan. Many students, however, pay only lip-service to stance training, not understanding or appreciating its importance.

In this video clip, Sifu Wong explains to course participants at a regional Taijiquan class in Costa Rica in February 2005 how to move from a Horse-Riding Stance (using the poise called “Carrying the Cosmos”) to a Bow-Arrow Stance, paying careful attention to principles like "differentiating yin-yang" and "moving from the waist". 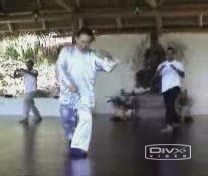 Many kungfu and wushu students talk about “ma-bo”, thinking that this important kungfu concept deals only with stances. Actually “ma-bo” means “stances and footwork”. It is not just necessary to have solid stances, it is also necessary to have agile footwork, completing the principle of yin-yang harmony.

Here Sifu Wong demonstrates how one moves forward in a Bow-Arrow Stance, paying attention to principles like “differentiating yin-yang”, “movement originating from the back foot”, and “controlled by the waist” to attain balance, agility and elegance. 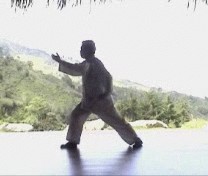 In Taijiquan, as in any martial art, one must not just be powerful but he must also be agile. If a practitioner is only powerful but not agile, or is only agile but not powerful, in kungfu terms it is said that he commits the “weakness of double yang”. In Taijiquan training, an important principle to attain this harmony of agility and solidness (i.e. being powerful) is “movement at the waist”, which is a crucial factor in effective bodywork.

Some may have read about the mention that in Taijiquan “the hands do not move, but the waist moves”. This video clip shows an example. This basic skill, amongst others, contributes to masters being “light like feather but heavy like mountain”. 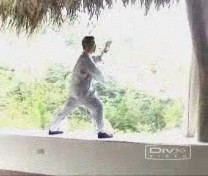 After having some energy flow in hand movements and agility in footwork and bodywork, the next progression is to combine these skills into one unity. This is the progression towards “six harmonies”, i.e. the harmonies of hands, legs, body, essence, energy and mind. Practicing “Cloud Hands” while moving about in various stances is a good method towards the “six harmonies”. This is also an excellent exercise to train the ability of “solidness in agility, and agility in solidness”, i.e. one can be powerful and agile, and agile and powerful at the same time. 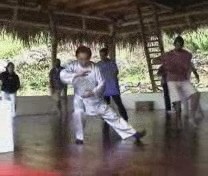 In most Taiji schools today, students learn forms after forms, and almost nothing else. The forms are genuine, and students often can perform them beautifully. But these external Taiji forms themselves are not Taijiquan. No matter for how long Taiji practitioners may practice these external forms, they will never be able to defend themselves or cultivate their spirit or even have excellent health unless they also practice other aspects of genuine Taijiquan training, like internal force development and combat application. In our school, Shaolin Wahnam, form practice constitutes only a small part of our overall training. Taijiquan forms, nevertheless, represent the crystallization of techniques masters developed over many centuries. 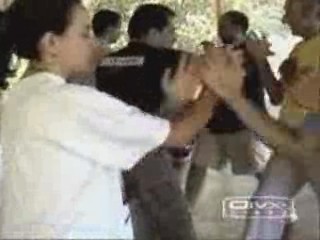 “Pushing Hands” is an ingenuous method to develop combat skills. In Shaolin Wahnam, four important skills are acquired in Stationary Pushing Hands, namely being relaxed, moving in energy flow, flowing with an opponent's momentum and then turning it against him, and sensing an opponent's moves and intentions. Thus, in the video clip you may see some parctitioners with their eyes close, so that they may sense better. As Wahnam Taijiquan is always practiced as chi kung, “Pushing Hands” also generates an energy flow and increases internal force. 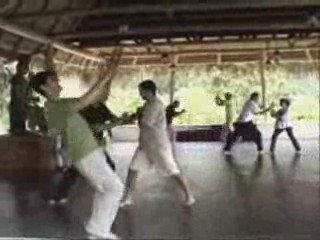 After acquiring basic combat skills in Stationary Pushing Hands, one progresses to Mobile Pushing Hands. The techniques in Pushing Hands are purposely reduced to the most simple so that students can focus on developing skills in applying the techniques. There is actually only one technique for attack, namely “an” or push, and only one technique for defence, namely “peng” or ward off, with variations in footwork and attacking direction. Pay attention to the opening, the progress and the completion of each attack, namely closing the opponent so that he may not counter strike, pushing from the back foot, and maintaining good form when completing an attack.

While “Pushing Hands” focus on developing combat skills, “Strike Hands” introduces combat techniques. Attacks can come in countless ways, but past masters generalized them into four main categories, namely striking, kicking, felling and gripping. A typical attacking technique from each category was practiced with its defence during the five-day regional Taijiquan class in Costa Rica. In this video clip, Sifu Wong.and Sifu Rama demonstrate simple strikes and their defences. The movements are not pre-arranged. 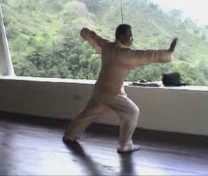 Channeling internal force from the dan tian to the hands or any parts of our body to attack an opponent is known as “fa-jing” or “Explode Force”. Two pre-requisites are needed — you must have sufficient internal force at your dan tian, and you must know the technique to channel the force. Some students attempt “fa-jing” but they have no internal force to start with. Naturally even if their technique is correct, they will be unable to “fa-jing”.

On the other hand, if they have the force but not the technique, they would be unable to do so too. Stance training is an excellent way to develop internal force. In Taijiquan, the pattern “Single Whip” is an effective technique to train the skill of “fa-jing”. Once you have the fundamental skill, you may use other patterns or technique to explode force.

After four days of the Basic Training shown above, course participants could apply Taijiquan skills and techniques to defend themselves against typical attacks from Boxers and Muay Thai fighters on the fifth day of the five-day regional Taijiquan course. Not only they did not hurt themselves at all in the sparring -- a situation, ironically, is taken for granted by many martial artists today -- they were not even panting for breath or tired after a few hours of sparring. A series of video clips showing their sparring sessions can be found here . These video clips, like the ones above, were taken impromptu during the training sessions. 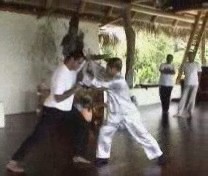