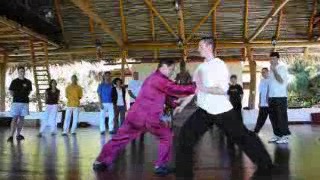 On the other hand, those who know combat techniques but lack the skills to apply them well, are also inadequate in combat. These problems arise because the practitioners fail to realize the difference between techniques and skills.

“Da Shou” literally means “Striking Hands”, or striking techniques. But Chinese is a concise language, and “da” here refers not just to striking but to all the four categories of attack, namely striking, kicking, felling and “chin-na” or gripping. Hence, in this section of Taijiquan training, all the different kinds of attack and their defence are dealt with.
Please chick the pictures or the captions to view the videos

Top and Middle Strikes and Defences

You and your opponent strike to the top and middle levels, and their defences. Note the use of body-movement in deflecting the attacks and countering. 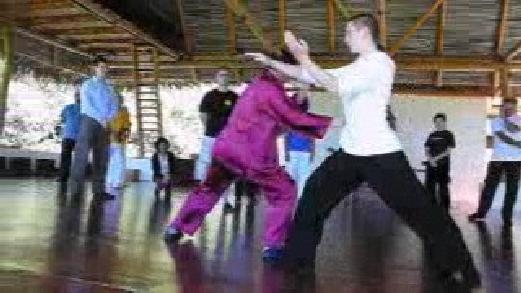 You deflect your opponent's attack and counter-attack at the top, middle and bottom levels. Note the different hand forms, namely, finger thrust to the top, palm strike to the middle, and vertical punch to the bottom levels. 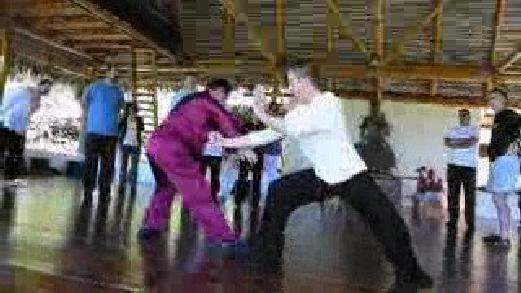 If the punch is low, use low cloud hands to ward it off. Cloud Hands can be used against middle or top attacks. 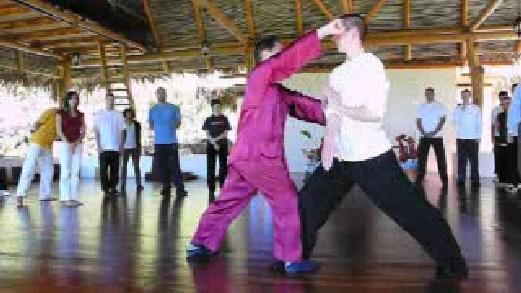 This is a close-range side attack. It is important to cover the opponent before attacking him. If he risks injury and counter-attacks recklessly, you should abandon the initial attack to protect yourself first. 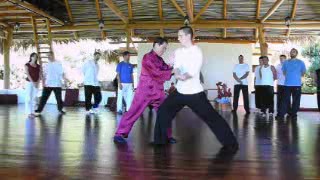 If an opponent swings a powerful side-attack at your temple, move back to avoid his full momentum and sweep away the attack according to its momentum. Then covering his hand, strike him at his ribs.

Various Counters against the Same Attack 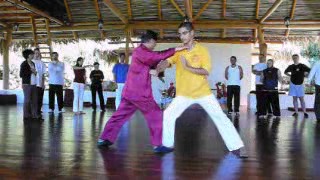 Of course, there are different counters against the same attack. Besides using a low vertical punch against the swinging side attack, you can also counter with a finger thrust to an opponent's throat or a palm strike to his chest. 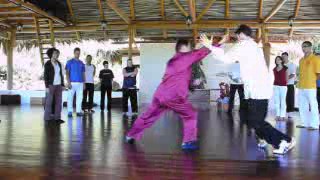 You must respond not just correctly to an attack, but spontaneously. You need not, and should not, think about what response to make. The correct response should come naturally and spontaneously. This comes about from systematic training. 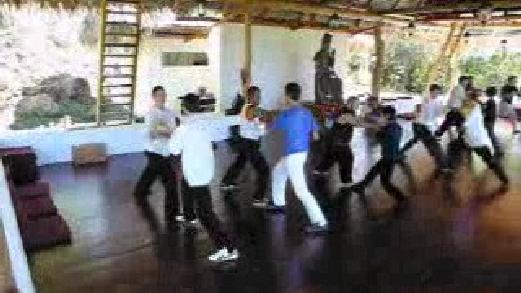 Participants practice responding spontaneously to their partners' attacks, which are not pre-arranged. The responses are intuitive, not intellectual. In other words, you don't observe the attack, decide what response to make, then make it.