COMBAT SEQUENCE 6: FELLING OPPONENTS WITH CARRY TIGER BACK TO MOUNTAIN 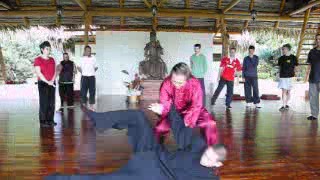 Felling an opponent requires some sophisticated movements. You normally need two or more movements to accomplish this attack, in contrast with strikes and kicks where one movement is sufficient. If the opponent can neutralize any of your movements during your process of executing them, your attack would be ineffective. In other words, even if he misses your first move, he still can neutralize or counter you in subsequent movements, whereas in a strike or a kick he would be hit.

Moreover, in the process of preparing for your felling attack or during the felling attack itself, you may be vulnerable to his counter-attacks. Hence felling attacks require more skills to implement than one-movement strikes or kicks.

Hence, a skillful exponent normally does not move straight in to attempt a felling attack. He prepares for the felling attack using various tactics. One useful tactic is shown here. You press in to attack. When he counters, before he could complete his countering move, you surprise him with your felling technique which you have prepared yourself to apply at the right moment. 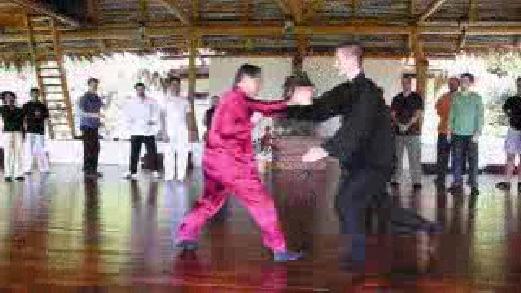 You can employ roll-steps to press into an opponent to attack. It is important to cover the opponent to be safe while attacking. 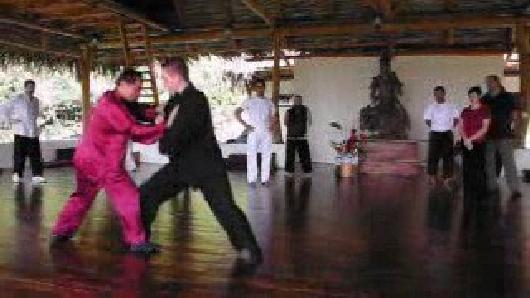 How would you counter a pressing attack? An effective way is to use changing steps. The pattern to implement this tactic shown here is called “Dodge, Extend Arm”. 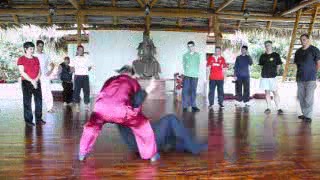 As your opponent neutralizes your attack with changing steps and presses in, you can deflect the attack and fell the opponent using “Carry Tiger Back to Mountain”. Notice that the felling is accomplished with proper techniques, and not with brutal strength.

This video clip shows the felling technique using “Carry Tiger Back to Mountain” from the other side. In practice with a sparring partner, let go of the held arm as he falls to prevent dislocating or breaking his arm. 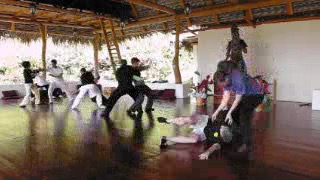 With proper techniques and systematic training, even fresh beginners can floor their opponents effectively and elegantly. It is also important to fall safely with break-falls. 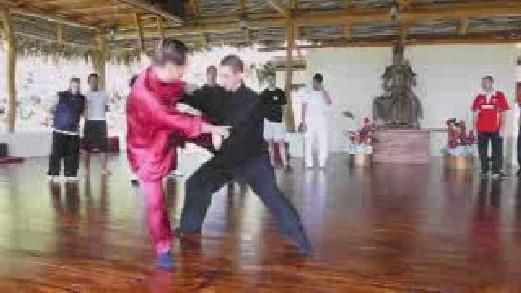 An effective counter against “Carry Tiger Back to Mountain” is “Swaying the Lotus”, which is a whirlwind kick. It is important to guard the opponent's hands while executing the kick. Holding him, however, is not necessary and may be disadvantageous. 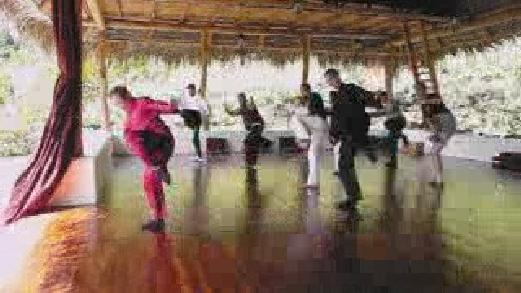 The class performs in solo the responder' mode of Sequence 6. You must protect your groin when executing “Swaying the Lotus”. 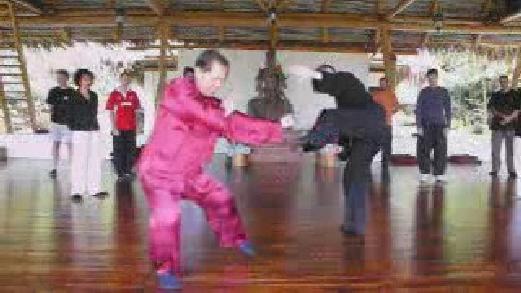 A good counter against the whirlwind kick is “Heavenly Priest Stamps Insignia”. Don't block a whirlwind kick as it is powerful when executed by a skillful opponent, and may break the blocking arm or hand.

Combat Sequence 6 -- Felling Opponents with Carry Tiger Back to Mountain from Wong Kiew Kit on Vimeo.