COUNTERS AGAINST CHOPS AND SWEEPS OF HEAVIER WEAPONS 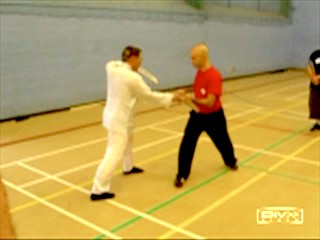 Another common but wrong defence we often see in kungfu movies is using a light weapon, like a pair of Butterfly Knives or a sword, to block a medium or heavy weapon, like a staff or a halberd. The light weapons will be broken by the sheer weight of the heavier weapons.

Then, how would you counter a downward chop or a horizontal sweep of a staff with your Butterfly Knives. This video series gives some examples..

Wrong Defence against a Staff Hit 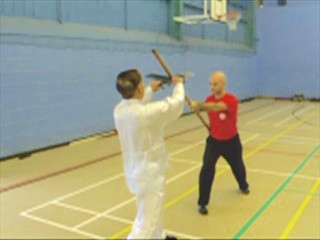 Here is a common but wrong technique to defend against a hitting attack from a staff. The opponent could use a reverse swing of the staff to hit your exposed areas. What would you do if an opponent strike your head with his staff?

Wrong Defence against a Thrusting Attack 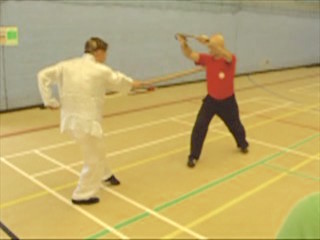 Blocking a downward hit is wrong. Blocking a thrusting attack is dangerous. The thrust is likely to go through. So how are you going to defend against a thrust? 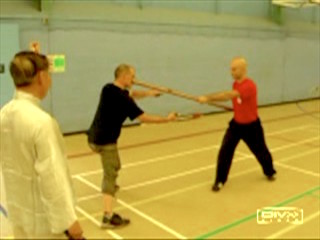 Sifu Mark Appleford volunteers to defend against a chopping attack. He uses “Fierce Tiger Descends Mountain”. The pattern is correct but the application is not. This is a good impromptu example illustrating that you must not only know the right pattern but use it correctly. Do you know how?

Correct Application of the Same Pattern 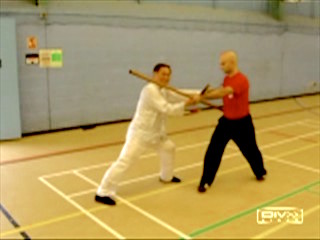 Here is the correct application of the same pattern, “Fierce Tiger Descends Mountain”. The circular movement above the head before the downward chop of the knives is important. Notice that an exponent does not block the downward hit but deflects it. 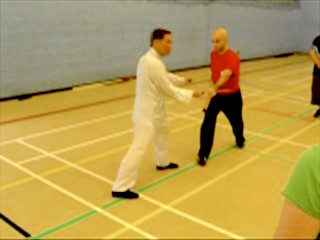 Here is more detail on how to deflect the downward hit of a staff or any heavy weapon using the circular movement of the “Fierce Tiger Descends Mountain” pattern. You can deflect the weapon even if it is heavy because your deflecting movement follows the momentum of the opponent. Good timing and good spacing are necessary.

Wrong Defence against a Horizontal Sweep 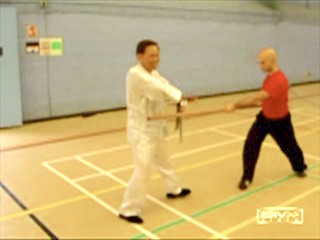 Continuous Reverse Sweeps of the Rhinoceros

An excellent counter against a horizontal sweep is “Rhinoceros Looks at Moon”. As the sweep is coming, move forward diagonally and reverse sweep a knife into the opponent's hand holding the weapon. You need not block his horizontal sweep because it will not reach you. You would have cut his hand before the sweep has traveled its intended path. If your opponent retreats to avoid you counter attack on his hand, follow forward with another Rhinoceros reverse sweep, giving him little chance to escape.

Butterfly Knives Counters against Chops and Sweeps of Other Weapons from Wong Kiew Kit on Vimeo.