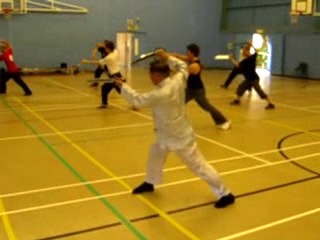 The significance of waist movement is revealled at the beginning of this pattern, “Rhinoceros Looks at Moon”

As in unarmed sets, various patterns in weapon sets are linked in some meaningful ways into sequences. This video series shows the first two sequences of the Butterfly Knives set, “Human-Character Double Southern Knives”.

These two sequences, which are named after their two crucial patterns “Fierce Tiger Descends Mountain” and “Rhinoceros Looks at Moon”, incorporate some important techniques of the Butterfly Knives. A combat application is explained here. More combat applications are explained in the next series.

Benefits of Practicing a Weapon Set 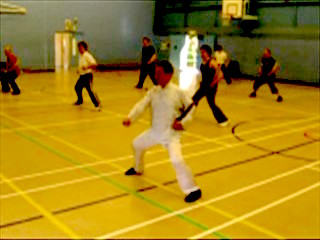 The class go over the patterns of the set. Practicing a weapon set, like an unarmed set, has many benefits. Do you know what these benefits are. 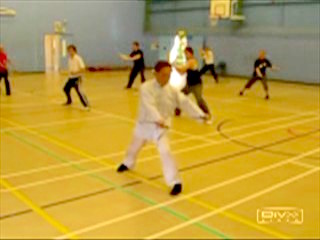 “Fierce Tiger Descends Mountain” is repeated many times in different directions, followed by “Jade Girl Combs Hair” and “Jade Belt Circulates Waist”. Notice that the onus of this pattern is slicing. It can also be used for cutting.

The Formidable Technique of Reverse Slash 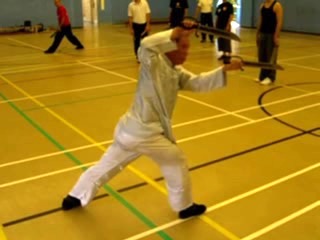 One of the most formidable knife techniques is the reverse slash, as shown here in the pattern called “Rhinoceros Looks at Moon”. Take note of the body-movement as well as waist rotation of this pattern.

An Application of Swaying Lotus 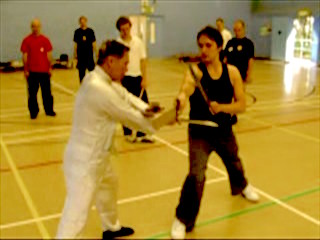 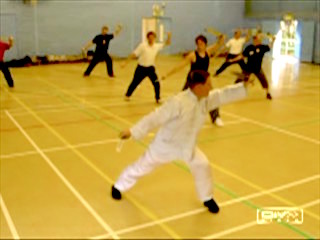 “Rhinoceros Looks at Moon”, “Phoenix Flaps Wings”, “Breeze Sways Lotus Leaves” and “Butterflies Fly Separately” are also useful poise patterns. There are, of course, other effective combat functions. Can you figure out what these combat functions are? 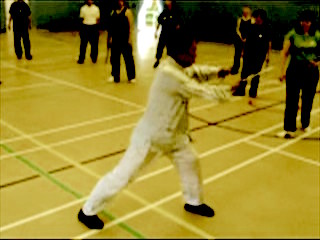 Patterns in a set can be taken out of the set to be practiced separately. These three patterns, “Breeze Sways Lotus Leaves”, “Phoenix Spreads Wings” and “Rhinoceros Looks at Moon”, are examples.