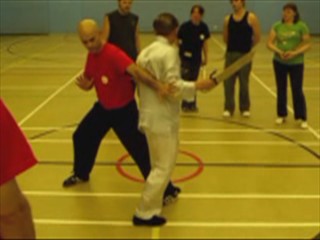 Turning around to counter

Having acquired the technique and skill of “khuen fa” or “making flowers” implemented in the pattern “Double Butterflies Flying”, the next step is to learn its combat applications.

It is a formidable technique. When applied skillfully, amongst other functions, it can be used to continuously attack an opponent almost irrespective of his responses!

On the other hand, participants also learn how to counter attacks of this formidable technique, thus making our combat training complete. Much skill is required to execute the technique and its defence effectively.

Continue Attacks Regardless of Opponent's Defence 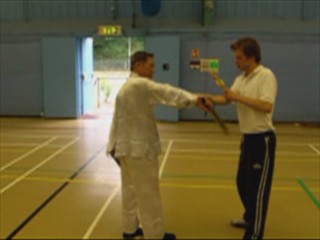 “Making flowers”, implemented in the pattern “Double Butterflies Flying”, is a formidable technique. If you are skillful, amongst many other combat functions you can apply, is to attack your opponent continuously almost irrespective of his response. If he tries to block your attack or hold your hand, you continue regardless of what he does!

How to Counter Continuous Attacks of Making Flowers 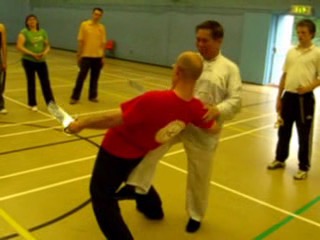 If “making flowers” is such a formidable attack, amongst other functions, how would you defend against it, especially if you are unarmed. As the opponent attacks with a right chop, the exponent grips his wrist using “Wave Dragon Back to Den”. The exponent positions himself so skillfully that it is difficult for the opponent to continue with his attack.

Turning the Weapon Back to the Opponent 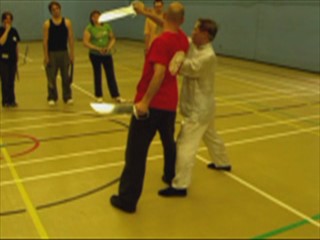 The exponent gives another impromptu example to counter the continuous attacks of “making flowers”. He “tames” the opponent's right chop with the pattern “Yun Dan Tames Tiger” (Yun Dan is the military god of wealth.) As the opponent continues with a reversed right chop, the exponent turns the chopping attack back to him using the pattern “Sweep Clouds See Sun”. 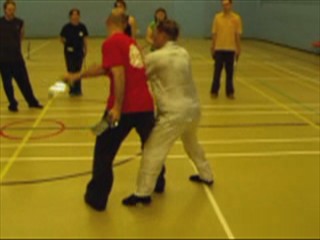 The Deciding Factor is Skills

Retreating a Step to Counter 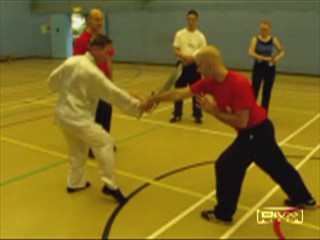 If an opponent grips your arm and pushes at you, just retreat a step and cuts the opponent's arm. As in life, when situations appear difficult, retreating a step often helps to solve problems.

Counter against a Seemingly Impossible Escape 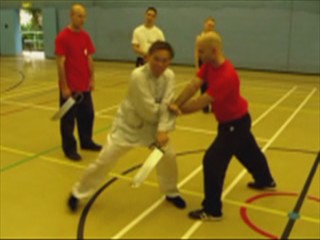 The opponent manages to hold the exponent's both hands in such a way that it seems there is no escape. But the exponent merely retreats a small step and counters with “Double Swallows Flying Separately”. 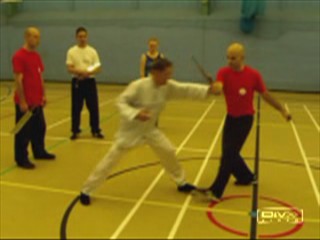 How would you defend against an armed opponent when you are unarmed. When you grip his hand to disarm him, he retreats a step and strikes you. One effective way is to follow his retreat to bridge the gap he attempts to create. The Unicorn-Step is very useful for this purpose. Then subdue him accordingly. 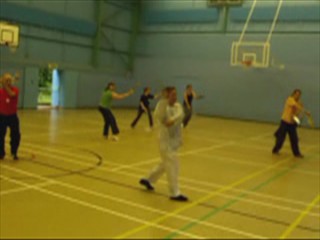 The class performs Sequence 7 which includes the important technique of “making flowers”. The pattern used to implement this technique is “Double Butterflies Flying”. The other two patterns are “Golden Knife Chops Rock” and “Double Dragons Emerge from Sea”.