SECRETS OF THE FLOWING WATER STAFF 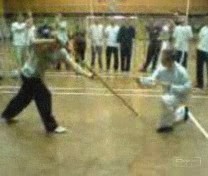 Three of my four masters — Uncle Righteousness, Sifu Ho Fatt Nam and Sifu Choe Hoong Choy — were excellent in their staff combat. This was no co-incidence as Shaolin Kungfu is famous for its staff.

But the staff techniques demonstrated by wushu performers from the modern Shaolin Temple are good only for demonstration, and ineffective for actual combat. If someone were to fight with a staff like that shown in wushu demonstrations, he would be defeated easily and quickly. Viewing the video clips below may provide you with the reason.

The “Flowing Water Staff” is a fantastic staff set. It is not spectacular to watch, but it is deadly effective. It can kill or maim an opponent with just one or two movements — unlike the staff demonstrations by modern wushu practitioners where many flashy movements are made.

These video clips are for private viewing amongst Shaolin Wahnam family members. Please do not let the secrets leak to outsiders.

Please click the pictures or the captions below to enter 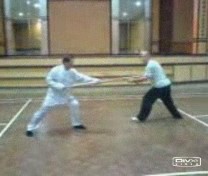 Covering or Flicking for Safety First 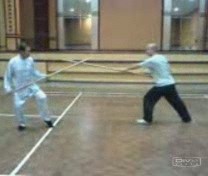 Along the Bridge or Flowing with Water

If the opponent covers or flicks away my staff, I “leak” around his staff and flow in. This is flowing with water. When he thrusts his staff at me, I cover or flick away his attack, and go over his staff to strike him. This is going along the bridge. 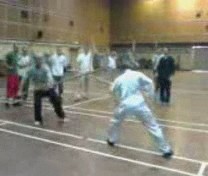 The Amazing Technique of Circling

I make a few thrusting attacks to set a momentum for Simon to cover or flick. Then I circle my staff around his to strike him. 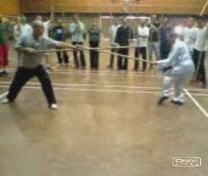 Hitting the Opponent's Hand or Wrist to Disarm him

Here I reverse the tactic. I set the momentum for covering and flicking away Simon's thrusts, then suddenly hit his hand or wrist with the tip of my staff, followed by a thrust to his heart (not shown in the video) for the coup-de-grace. 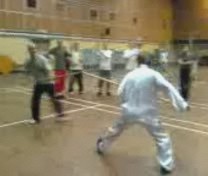 What would you do if your opponent hits your hand or wrist to disarm your staff? Let go of the hand momentarily and glide in with “High Mountain Flow Water” to strike his shin or groin.

What would you do if your opponent uses “High Mountain Flow Water” on you? Respond with “Tiger-Tail Staff”. 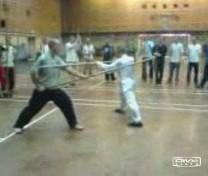 As your opponent attacks, shift aside and counter with “Phoenix Dots Head”, dotting his head with the tip of your staff. If he applies this technique on you, a good counter is “Horizontally Sweep a Thousand Armies”. Notice the principle of “If there is a bridge, go along the bridge. If there is no bridge, flow with the water” involved.