WE TASTE OUR FOOD THREE TIMES - WITH OUR NOSE, OUR EYES AND OUR MOUTH 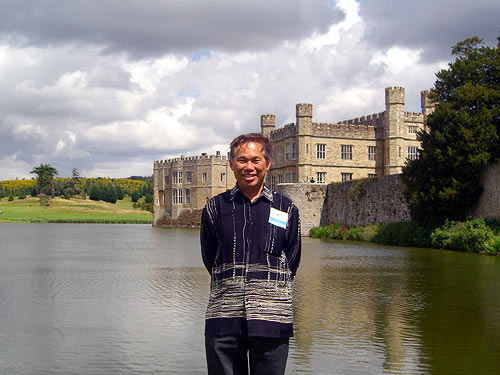 At 12 pm on Saturday 21st July 2007, Sifu, Michael and I set off for a 2 day road trip. We had a very flexible plan, head towards Wales, explore Wales, drop Michael off in Manchester and get Sifu to Heathrow for 17:30 on the 23rd July. The only other specification was to avoid using motorways and major A roads as much as possible. I had my own hidden agenda, to avoid driving in or through London at all costs!

We broke our journey with a visit to Leeds Castle. Now let's clear up one thing immediately; Leeds Castle is nowhere near Leeds! It's just off junction 8 on the M20. I state this because I was keeping a running text message going with my wife Clare. Every opportunity I got I sent our location. Anyone who has been in love, or preferably is “in” love will understand. Enough to say that my text: "Hey baby, we're at Leeds Castle" caused quite a stir.

Leeds Castle was very impressive and I enjoyed taking pictures of Sifu and Michael at various points around the grounds. Sifu asked many questions that neither Michael nor I knew the answers to, and I'm ashamed to admit that I may have made a few answers up. Mainly things to do with historical facts, dates, royal figures that kind of thing.

After an enjoyable exploration of Leeds Castle, we set off to find somewhere to eat. In theory this should be easy. Drive, find an establishment selling food, park, and enter the establishment. Job done. In practice this was not so easy. Trying to find somewhere in the UK that serves food after 2 pm can be rather troublesome. After a very frustrating drive around Maidstone, I gave up and started heading Tonbridge. Luckily we managed to find a pub that served food all day and I continued to introduce Sifu's gourmet taste buds to some of the worst food available in Europe.

It seems to me that good food is the norm at eating establishments in countries around the world. In the UK it is the exception. As hard to find as the Loch Ness Monster, unless of course you know the area exceptionally well. Ever since Nottingham October 2004 (when I organised my first course for Sifu) eating out with Sifu has provided a constant source of embarrassment for me.

Before I started my practice with Sifu, I viewed food as fuel. Something to stop me from dying, certainly not a source of pleasure. About 12 months into my practice, I noticed that I was enjoying food more and more. Appreciating subtle flavours, smells and colours. I started to put weight on for the first time in years and felt better in myself. I remember Sifu explaining that we taste our food three times. The first time with our noses, the second time with our eyes and the third time with our mouth. If food smells good, looks good and tastes good, it's a winner. Our lunch didn't rank very highly in any of these areas.

With full stomachs we continued our journey; Michael (our navigator) plotted a course for Sifu's English teacher, Ms Stamford, who lives near junction 6 on the M25. We had tried calling ahead several times without success and when we arrived we were greeted with an empty house. Sifu expressed an interest in visiting Oxford. Our trusty navigator studied the map for a few minutes, announced confidence in a suitable route (avoiding motorways!) and we were off again.