After an hour of travelling along twisty country lanes I asked Michael how far we had travelled. Receiving no reply I looked in the rear view mirror to see he was doubled up, head touching the map, fast asleep. I kept going and eventually he woke up. I asked him again how far we had travelled. He explained that if where we had set off from was the 9 on a clock and where we were heading to was the 3 on a clock. Then we were currently at about 10. Doing a quick calculation I realised that at this rate we would be on this road for many more hours. Drastic action was required if we were ever going to get Michael back to Manchester before Monday!

I've always had a bit of a problem with re-tracing my steps, I dislike going back the way I've already travelled. So I made an executive decision to take the next road on the right and hopefully we'd join up with the A55 in double quick time. 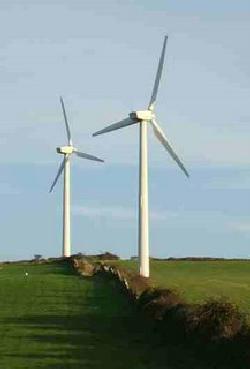 Big mistake! If you look at any road atlas, you'll notice that the roads are colour coded depending on their size. I had turned us onto a road without a colour and before I knew it the wing mirrors on the car were clipping the hedges on both sides of the road and grass was growing in the middle of it in places. We did pass a rather spectacular wind farm in the field next to us, but the fascination I would usually have felt was dampened by the rapidly growing feeling of being lost. Fortunately Sifu kicked in with his supernatural sense of direction and after about another half an hour we popped out onto a wider road. I was very much relieved as my nerves were beginning to fray a little and travelling at 15mph, never knowing what was going to jump out from around the next bend was beginning to get to me. Somehow we ended up on the number 2 of our clock and managed to get back to the Britannia bridge in quick time.

By now the black rain clouds were thickening up and it was getting dark. I joined the A55 and kept going. By the time we neared Chester I had to stop again as none of my staying focused tricks were working, not even watching Michael in the rear view mirror as he did battle with sleep, his head bobbing up and down like a nodding dog, could do the trick. We ended up at a McDonalds and I just couldn't comprehend how busy it was. My father had warned me that we were taking our road trip during one of the busiest weekends of the year. The one where the schools break up for the 6 week holidays and most of the UK goes on the move. But I was not prepared for this. Sifu and Michal drank their tea whilst I sipped my coke and we all ate the remains of Sifu's birthday cake. Chocolate cake never tasted so good!

Back on the road again it was decided that we would blast on through to Manchester where Michael could recommend us somewhere good!