AT LAST WE CAN HAVE SOME GOOD FOOD 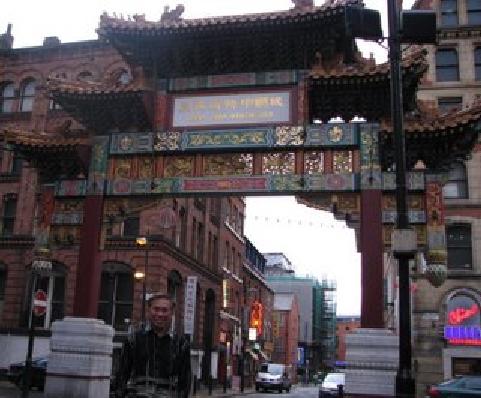 Having lived in the area for all of his life Michael knows the roads around Manchester like the back of his hand and we made double quick time tearing down the motorway. By 20:00 we were parked up in a car park next to the arch that denote Manchester's China Town district and heading towards a good Thai restaurant that Michael recommended.

I have to say the food was the best I had tasted for a long time. Unfortunately I wasn't able to enjoy it as much as I would have liked. I was too busy trying to secure accommodation for the night. The thought of another night in the car followed by a drive to London Heathrow and then Devon the following day was too much for me to contemplate. I think I might have disappointed Sifu slightly with my frantic phone calling and map waving during our meal. Not having any luck it was agreed that I would search the internet once we arrived at Michael's house.

After our meal Sifu asked for a tour of Manchester. Michael was an excellent host and finally one of us was in a position to answer all of Sifu's questions about dates, population, major events etc. The tour Michael took us on was very comprehensive and it was quite a while before we headed off to his house. I had to laugh when once again we came to a main road that was completely shut down and we were left having to travel “around the houses” to get where we wanted.

Arriving at Michael's house south of Manchester was a little sad as it meant we were losing one of our traveling companions. Michael set me and Sifu up on computers and provided the tea. I searched for a hotel whilst Michael emptied his bags out of the car. To my complete and utter amazement there was a travel lodge a few miles down the road from Michael's. I knew that Sifu hoped to put a few more miles between us and Manchester but with it being almost 23:00 hours I'd been driving for nearly 18 hours! My eyes were hurting and all I could think about was sleep. Sifu could clearly see that I was done for the day and saying our goodbyes to Michael and his sister we set off for the Travelodge.