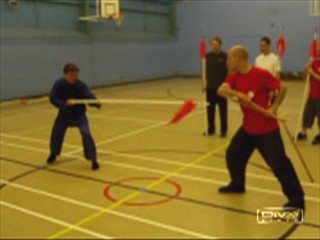 The spear against the three-sectional staff

The King of Weapons

The spear is considered the king of weapons because the spear shoot is technically the most difficult attack to defend against. Why is this so? It is because being light and long a spear can be speedily pulled back for another shoot after one is made. 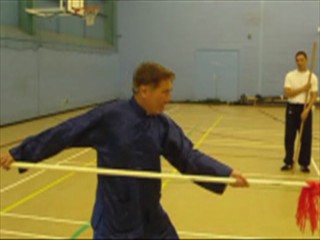 There are two main types of spears, namely the metal spears and the flower spears. The set presented here is a composite set from “Traveling Dragon Spear” and “Thirteen-Technique Spear”, with some patterns from “Cross-road Throat-Locking Spear”. 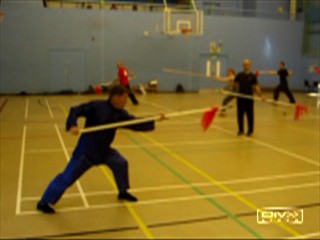 2. The Formidable Circling and Shooting Techniques of the Spear

The spear shoot is considered by many kungfu practitioners as the most formidable weapon attack because it is technically the most difficult to defend. The spear shoot is enhanced by the circling technique. The circling and shooting are often used together, making the combined movement a highly effective way for both attack and defence. 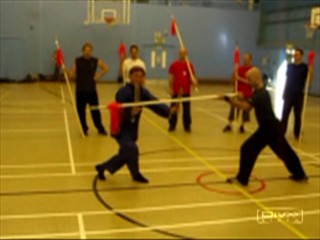 3. Using the Spear against the Butterfly Knives and the Big Knife

How would you defend against an opponent using a pair of Butterfly Knives or a Big Knife? Do you know how these techniques are used? 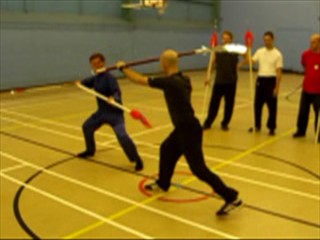 4. The Spear against the Downward Chop and Reverse Sweep of the Big Knife

A Big Knife has the advantages of both length and weight. A downward chop of a Big Knife is therefore deadly. A subtle technique of the Big Knife is a reversed sweep. What spear techniques would you use to counter these attacks from a Big Knife? 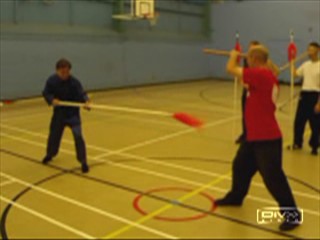 5. The Spear against the Versatile Three-Sectional Staff

6. Circling and Shooting against the Three-Sectional Staff 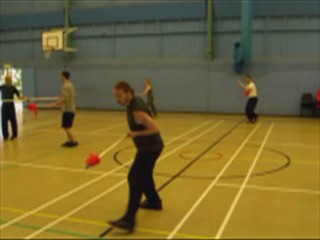 7. Once you have the Skills, Learning Techniques become Fast and Easy

While it is a norm to learn a kungfu set in a few months, our participants learn a set in a few days! Participants in this weapon course, for example, learn three new weapon sets as well as their combat applications in five days. 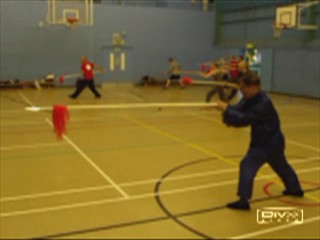 8. Sharing Secrets of the Spear 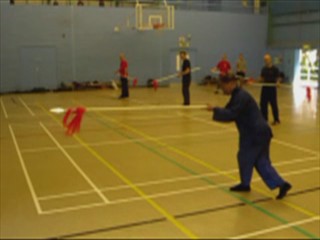 9. The Shoot -- the Most Representative and Most Deadly of Spear Techniques

The shoot is the most representative as well as the most deadly technique of the spear. It is regarded by many as technically the most difficult to counter. Many types of shoots are shown in this video series. The importance of skills and tactics in the application of the shoot is also discussed. 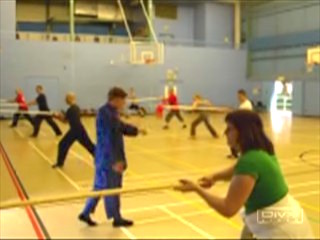 Various ways of thrusting the spear, like reverse-thrusts and side-thrusts, are further demonstrated and explained in this video series. The deadly “reverse-thrust on the ground” is also shown. 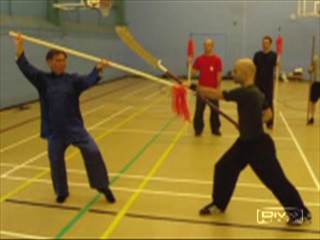 11. How would you Counter the Downward Chop of a Big Knife?

How would you respond to the downward chop of a Big Knife? Blocking it, like what is shown in some kungfu movies, is an inferior response. It may result in the spear being chopped into two. Two superior responses are demonstrated in this video series. The first one is merciful, merely slicing the attacker's hand. The second is deadly, resulting in serious or fatal injury to the opponent. 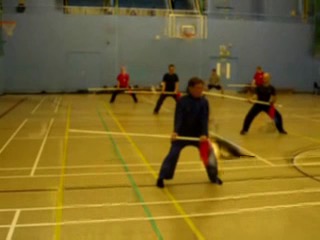 12. Using the Spear like a Dagger or a Staff

A skillful exponent not only can shoot a spear in different ways, he can also use his long spear like a short dagger for close-body fighting. If he does not want to cause serious injuries on his opponents, he may use his spear like a staff. Or he may use an opponent spear to hurt the opponent himself. The video series here records some of these lessons. 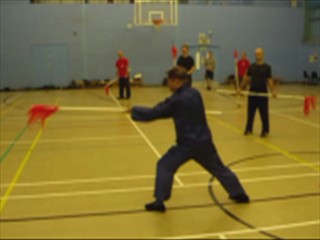 13. The Spear Thrust and the Spear Shoot

Besides piercing an opponent with the shoot-technique, you can also pierce him with the thrust-technique. The thrust is “harder” than the shoot. Therefore it is preferred when piercing through hard objects, like an amour. 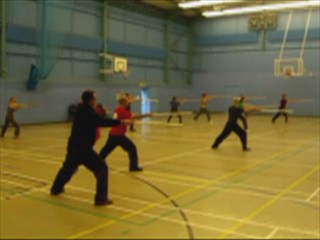 14. Reviewing the first Five Sequences of the Set

It is incredible but the course participants learned the Traveling Dragon Thirteen-Technique Spear Set in just one day. There are eight sequences in the set. The video series here record them reviewing the first five sequences that they have just learnt. The remaining three sequences will be shown later. 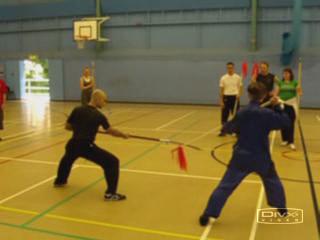 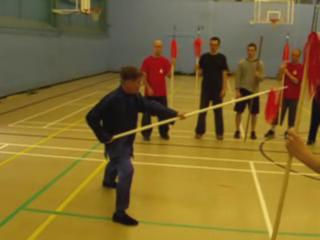 16. Covering the Four Corners against All Attacks 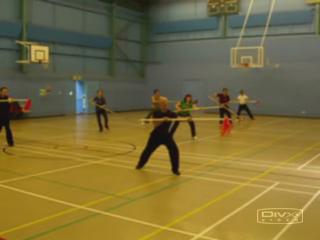 17. Remarkable Achievement at the Weapon Course

Our course participants understood the three harmonies of feet, body and hands that enabled them not only not to sustain injuries from their training but also attain maximum result with minimum effort. They also learned and practiced combat applications of basic patterns so that their performance became meaningful to them. They could relax and generate an energy flow in their peformance so that they were not tired even after some hours of vigorous practice. 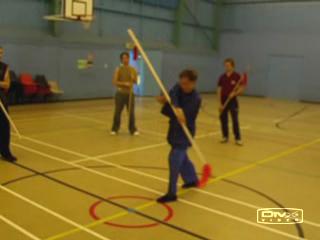 18. Making Flowers with the Spear

“Khuen fa” can be tranlated as “making flowers”. There are different ways of “making flowers”, but all of them have the common factor of your weapon spinning fast around yourself. It is not an easy technique to learn, but the video clips and explanations below will simplify the learning process. 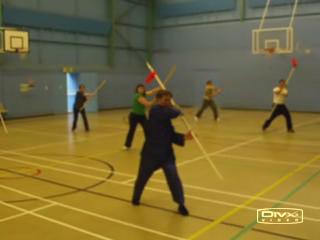 Although “Making Flowers” is an important technique, it is not easy. Hence, we spend quite some time practicing this important technique. We explore the numerous ways to make flowers, such as making “open flowers” and “close flowers”, using the left-hand spear or the right-hand spear, crossing hands on the left side or the right side, and moving in different stances. 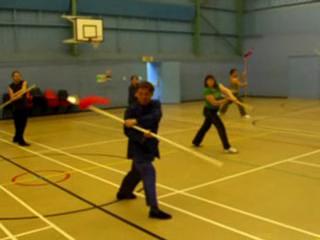 20. Confusing your Opponents with Variations and Changes in Making Flowers

“Making Flower” is a very useful composite technique comprising of a few different techniques. If you are skillful in applying this composite technique, it can be very formidable for both attack and defence. As there are numerous different ways of making flowers, you can confuse your opponent by changing from one way to another, often without your opponent realizing the subtle changes. 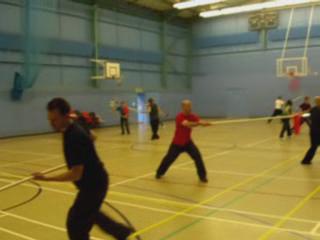 Learning the spear set in two days does not mean we are already proficient with the spear. We have to practice consistently to master the necessary skills. 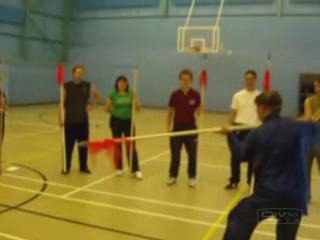 22. The Difference between Patterns and Techniques

Some practitioners may perform spear patterns well but may not know spear techniques. What is the difference between a pattern and a technique? If you use a Bow-Arrow Stance and shoot your spear straight ahead, this form is a pattern and is called “Green Dragon Shoots Pearl”. The way the spear is applied for combat is a technique, and this particular technique is called “spear”. 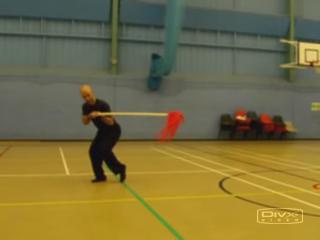 23. The Thirteen Techniques of the Traveling Dragon Spear

The Traveling Dragon Thirteen-Technique Spear is so called because the movements of the spear are like those of a dragon and there are thirteen main techniques. As a dragon, the movements are flowing and graceful but powerful. The thirteen techniques are "circle", "spear", "sweep", "flick", "wave", "brush", "lift", "ground", "return-horse", "sideways", "slanting", "shake head", and "make flowers".

You can also view all videos here

1. Introducing the Traveling Dragon Thirteen-Technique Spear
2. The Circling and the Thrusting Techniques of the Spear
3. Using the Spear against the Butterfly Knives and the Big Knife
4. Spear Counters against the Downward Chop and the Reversed Sweep of a Big Knife
5. The Spear against the Versatile Three-Sectional Staff
6. Circling and Shooting against the Three-Sectional Staff
7. Once you have the Skills, learning Techniques become Fast and Easy
8. Sharing Secrets of the Spear
9. The Shoot -- the Most Representative and Most Deadly of Spear Techniques
10. Learning Various Spear Techniques like Circling, Flicking and Lifting

11. How would you Counter the Downward Chop of a Big Knife?
12. Using the Spear like a Dagger or a Staff
13. The Spear Thrust and the Spear Shoot
14. Reviewing the first Five Sequences of the Set
15. Outside-Door and Inside-Door Applications
16. Covering the Four Corners against All Attacks
17. Remarkable Achievement at the Weapon Course
18. Making Flowers with the Spear
19. Various Ways of Making Flowers
20. Confusing your Opponents with Variations and Changes in Making Flowers

21. Learning the Spear Set in just Two Days
22. The Difference between Patterns and Techniques
23. The Thirteen Techniques of the Traveling Dragon Spear