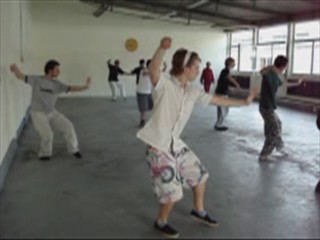 Tantui is considered by many as the essence of Northern Shaolin Kungfu and is practiced by thousands of people all over the world. It was formalized at the Long Tan (Dragon Pond) Temple in Shandong Province in North China, and was famous for its “spring-kicks”.

Due to its long history, there are a few versions of Tantui. The one taught in our school is from Chin Woo Association founded by the great Northern Shaolin master, Huo Yun Jia, nicknamed “Yellow-Face Tiger”, yellow being the skin colour foreigners assigned to the Chinese.

However, Tantui has been practiced only in its solo sequences, and most Tantui practitioners today do not know its combat applications. Lamenting this situation, Grandmaster Wong has devised a series of Combat Applications of Tantui which can be accessed here in twelve sequences.

We would like to thank Irina and Anton, both from Shaolin Wahnam Germany for providing these video clips.

12 Combat Sequences of Tantui from Wong Kiew Kit on Vimeo.

Tantui, the Essence of Northern Shaolin


Tantui at the UK Summer Camp