KNEE STRIKES AND THEIR COUNTERS 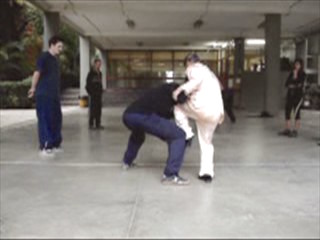 The Muay Thai knee strike is formidable, feared by many martial artists. The Muay Thai fighter grabs your neck, pulls you downward and strikes upward with his knee. How would you counter against such attacks?

Such knee attacks are found in Shaolin Kungfu, such as in “Golden Cockerel Stands Solitarily”. In fact knee strikes in Shaolin Kungfu are more refined because we have to take care of our own safety while applying the strikes, whereas Muay Thai fighters normally pay little attention to such precaution as they are protected by safety rules.

How would you counter a felling attack? Here is one method. As your opponent places his “anchor” behind your leg to fell you, lift your leg over his anchoring leg, and strike him with your other knee, taking care that you have covered him safely. This pattern of knee attack is called “Golden Cockerel Stands Solitarily”.

The counter against a felling technique using the pattern “Golden Cockerel Stands Solitarily” is demonstated again. Good timing and good spacing are important. It is essential that you cover your opponent well, especially to prevent him from striking your groin while you attack him with your knee.

If you attack a Boxer with a felling technique, the Boxer is unlikely to counter successfully because such countering techniques are not in his repertoire. Yet, we must always be prepared. We always presume that our opponents are capable.

If an opponent strikes you with his knee, how would you counter? Retreat your front leg to avoid his knee strike, and simultaneously strike him with a leopard punch using the pattern “Golden Leopard Charges at Rock”. If your cannot reach his body with your leopard punch, strike his knee or any part of his leg.

Making Appropriate Changes According to Situations

Here is the counter against knee strikes from another angle. The Shaolin exponent uses the Horse-Riding Stance instead of the reversed Bow-Arrow Stance, and the pattern “Golden Leopard Speeds through Jungle” instead of “Golden Leopard Charges at Rock”. The patterns may be different but the principles are the same. Kungfu is alive. You need to make appropriate changes according to the situation.

Finer Points of the Counter

Here are the finer points of the counter in some detail. The opponent is pressing your head downward, while his knee is coming up at your chest. Not only you neutralize the simultaneous downward and upward momentum of the opponent, you can also prevent him from further attacks. Note the appropriate stances and footwork according to the space between you and the opponent.