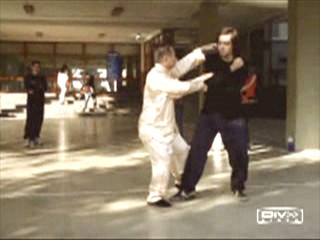 Depending on how far away an opponent retreats, your pursue can be a one-step, two-step, three-step or multiple-step chase. You should also chase according to his retreating direction, sticking to him like glue but covering him so that he cannot counter-attack you.

It is your strikes that chase after your opponent; your footwork provides the right spacing. Understandably, you may be slow and hesitant initially, but with systematic training your chasing movement must be fast and spontaneous.

You can refine both the smoothness of your movement and the extent of your reach by using appropriate stances. The three main stances are False-Leg, Bow-Arrow and T-Step, which will bridge the space between you and your opponent by half a step, one step or one and a half step respectively. The transition from one to another of these stances makes your movement to be smooth

Variations in the One-Step Chase

If you cannot reach your opponent with a Bow-Arrow Stance after a one-step chase, you may bridge the gap by shifting you back foot forward near to your front foot in a reversed T-Step. Hence, in a one-step chase you may use a False-Leg Stance, a Bow-Arrow Stance or a reversed T-Stance, which bridge the gap between you and your opponent by half a step, one step, and one and a half step.

These variations are very useful for fighting against a Boxer whose bouncing takes about half a step each. This means if a Boxer bounces away three times, you can bridge the gap with just one step using a reversed T-Stance, thus giving you superior technical speed.

Tim applies the newly learnt one-step chase. Here, Alex actually uses one and a half step to move away instead of three steps, because he uses kungfu footwork. Yet, Tim can chase after him. Had Alex bounced away three times, as many Boxers do, he would be technically slower. This indicates the superiority of kungfu over Boxing in technical speed. Typically the space covered by a kungfu exponent in one step using kungfu footwork, needs to be covered in two steps when bouncing about in Boxing.

If your opponent keeps moving away, you can use two, three or more steps to chase after him. In this video clip Grandmaster Wong uses a three-step chase after Alex who bounces away as a Boxer does. The chase must be smooth and spontaneous, and you use the appropriate stance according to the spacing between you and your opponent.

Here is a multiple-step chase. No matter how or where an opponent tries to escape, he finds the exponent's strikes chasing after him. It is easier to chase after an opponent who bounces away like a Boxer because kungfu footwork is technically faster than a Boxer's bouncing about. Pay attention to the three external harmonies of legs, body and hands when executing a chase.