WHY MANY KUNGFU PRACTITIONERS ARE UNABLE TO COUNTER MUAY THAI AND KICK-BOXING ATTACKS? 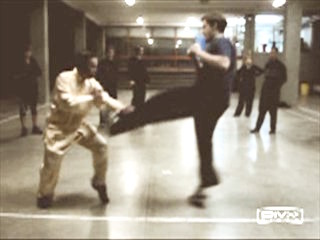 The main reason is that they do not know the counter techniques. Many kungfu practitioners only practice forms but not combat application. Many other martial artists may practice free sparring but they mostly punch and kick widely.

Of course, skills are very important. But first of all they need the techniques upon which to build their skills. This video series show some useful techniques against Muay Thai fighters and Kick-Boxers.

Here are some useful counters against the Muay Thai attacks. Avoid and simultaneously strike the kicking leg, cover the fast jabs and counter-strikes. One should also not retreat and give the initiative to the Muay Thai fighter.

The Advantage of the Bow-Arrow Stance

The mechanics of the counters are revealed and explained. If you use the Bow-Arrow Stance and stretch out your guard hand, there is no need to move back your legs as the Muay Thai fighter attacks because he would be unable to reach you without him first sustaining injury.

The counter is demonstrated again. Notice that if you use your stance correctly, you are quite safe from the opponent's attacks even when you may fail to block his strikes. This is employing the principle of “long against short”. Your stances and hands have longer reach than those of your opponent.

If you are skillful in these techniques, the Muay Thai fighter or Kick-Boxer is actually at your mercy. If he kicks you strike his leg. When he lowers his leg, you cover his hands and strike him. If your skill levels are similar, your superior techniques will defeat him quite easily.

Strategy of Cover, Strike and Chase

The strategy is illustrated again. Use one hand to cover the opponent's both hands and strike him. If he tries to escape by moving back, chase after him. If he kicks, strike his leg.

Don't Be Pushed Back to a Wall

There is a common mistake many untrained persons make when facing a Muay Thai fighter or a Kick-Boxer. They move back when the opponent attacks, thus giving the opponent the initiative and advantage. Eventually they are being pushed back to a wall.

Stopping an Attack in his Forward Movement

A good tactic is to stop the attacker in his forward movement. As he kicks, avoid the kick and simultaneously strike his leg. As he moves in to continue his attack, stop him using the tactic of “one against two” and counter-attack him.

Why Many Kungfu Practitioners are Unable to Counter Muay Thai or Kick-Boxing Attacks_ from Wong Kiew Kit on Vimeo.