COUNTERS AGAINST A BOXER'S LEFT JABS 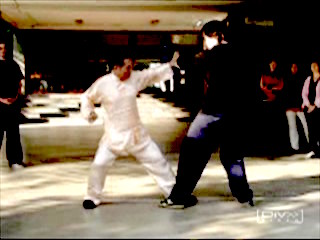 We can cover a Boxer's right jabs with our left hand using “Kitten Washes Face” or “Wave Dragon Back to Cave”. In reality, a Boxer usually uses left jabs instead of right jabs. His typical tactic is to use left jabs to pave the way for a powerful right punch.

We start with the Boxer's right jabs instead of his left mainly for the purpose of systematic progression. In our basic Combat Sequence 1, which constitutes our basic sequence from which our counters against a Boxer develop, we use our left Single Tiger against an opponent's right attacks.

You can cover a Boxer with your left hand using the pattern “Wave Dragon back to Cave” when he makes a right jab. What would you do if he makes a left jab? You can use your left hand to cover his left jab using the pattern “Single Tiger Emerges from Cave”. You must cover his hand, not just brush it away, otherwise he can still strike you. Having covered him and making sure he can't counter-strike, you strike him with your right “Black Tiger Steals Heart”.

Opening or Closing, and Striking

The Emperor and the Minister

Here is how to close an opponent. But if appropriate, you open him instead, as in two occasions in the video clip. Here, the left hand, which is used to open or close the opponent, is known in kungfu terms as the “minister-hand”. The right hand, which is used to strike the opponent, is known as the “emperor-hand”. The “minister” paves the way for the “emperor” to strike.

Paving the Way to Strike

Here are the mechanics for applying the minister-hand to pave the way, and the emperor-hand to strike in conjunction with correct footwork. The patterns are “Single Tiger Emerges from Cave” and “Kitten Washes Face” (or “Wave Dragon Back to Cave” when covering) for paving the way, and “Black Tiger Steals Heart” for striking. The footwork involves the False-Leg Stance and the Bow-Arrow Stance.

Using Body-Movement instead of Footwork

This is a progression from the tactic shown in the previous video clip. Instead of moving backward into a False-Leg Stance and forward into a Bow-Arrow Stance, you just shift your body backward and forward without moving your feet. The closing or opening of the opponent with your left hand, or minister-hand, and striking with your right hand, or emperor-hand, is the same.

Shaolin Counters against a Boxer's Left Jabs from Wong Kiew Kit on Vimeo.