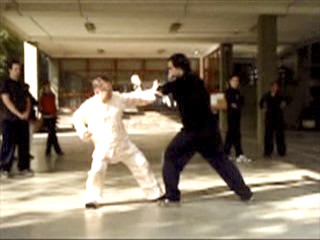 An effective way to counter a Boxer's left jabs is to use body-movement, without moving your legs

"Know yourself, know your enemy, and you will win every battle" advised Sun Tzu, the great strategist, in his Art of War. If you know how a Boxer typically fights, and devise appropriate tactics to fight him accordingly, you will have a good chance of beating him.

Typically a Boxer throws leading jabs with his left hand, and follows up with a powerful cross-strike with his right hand. A good tactic is to brush away his jabs and close him so that it is difficult for him to throw further jabs or crosses. Then you strike him to clinch victory.

Responses against the Boxer's Hooks

When a Boxer executes a left hook, you can brush it away with your left “Single Tiger Emerges from Cave”. If he executes a right hook, using your left “Single Tiger” would be going against his momentum. A better response is to use your left “Kitten Washes Face”, which flows with his momentum. In both cases, you need to “sink” back so that his hooks would pass you even without you brushing them away. However, if he is about to start his left hook, and you are ready, you can intercept it with your left palm or right palm.

To intercept a hook, which is similar to “Hang a Golden Star” in Shaolin Kungfu, you can use “Immortal Emerges from Cave”, and not “Single Tiger Emerges from Cave”. You could break the Boxer's wrist or forearm with a good interception.

Brushing away and Closing Left Jabs

You can cover a Boxer's left jabs. Here the Boxer is quick fast. You can avoid his fast jabs with agile body-movement, without moving your legs.

Beware of an Agile Boxer

When you close a mediocre Boxer, you can move in safely to attack him. He would be unable to counter-attack you. But a good Boxer is agile; he may turn his body to strike you with his right punch.

Covering and Striking a Boxer