STICKING TO A BOXER AS HE TRIES TO BOUNCE AWAY 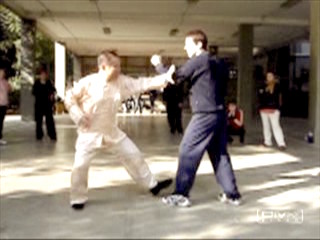 An excellent tactic is to close a Boxer and strike him, giving him no chance to counter-attack

When you have closed a Boxer effectively, he cannot strike you or move forward. You can then strike him repeatedly. His likely escape is to bounce back.

As he bounces back, you should chase him, “taming” his hands at the same time. The space taken by a Boxer's bouncing is short. Usually you can cover the same space in one step that a Boxer needs to bounce back twice. Hence, you have superior technical speed over a Boxer. In other words, when a Boxer tries to escape by bouncing away, you can easily cover the space and still close him and strike him.

Closing, Chasing and Striking a Boxer

If you close a Boxer and strike him, there is little chance for him to escape. If he bounces away, you chase after him. If he tries to cover himself with his hands, you strike his arms.

Tactic against a Boxer's Left-Left-Right

Here is a good tactic to use against a Boxer's favorite left-left-right attack. Close his jabs whenever you can. Shift back your body to avoid his strikes if he escapes your closing on him. Strike whatever parts of his exposed body, including his arms and head.

Little Chance for Boxer to Escape

You may close a Boxer as soon as he jabs, and strike him repeatedly. You use one hand to control his two hands, making it difficult for him to strike you. He also has little chance of escape. If he tries to bounce away, chase after him with continuous strikes.

When you close a Boxer correctly, he finds it hard to counter-attack you. But you can attack him with your other hand. If he tries to move back, follow him closely with repeated strikes.

Close Boxer as Soon as he Jabs

Close a Boxer as soon as he jabs. As he pulls back his jabbing arm, follow his momentum and close him. This gives the Boxer little or no chance to escape. Strike whatever exposed parts of his body, including his upper arms.

If you fail to close a Boxer on his first jab, you can close on his next or following jabs. Shift back your body, without moving your legs, to avoid his strikes if you fail to close him. Once you have closed him, stick to him like glue and strike him relentlessly.

Sticking to a Boxer as he Tries to Bounce Away from Wong Kiew Kit on Vimeo.