COUNTERING THE LEFT-LEFT-RIGHT OF BOXERS 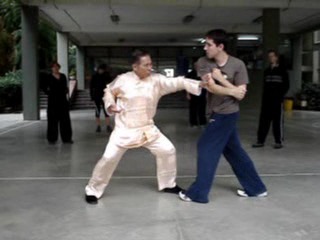 Brush away a Boxer's jabs, close him and strike him

An effective counter tactic is to brush away his left jabs with “Single Tiger Emerges from Cave”, and his right crosses with “Wave Dragon Back to Cave”. Whenever appropriate, as you brush away his jabs or crosses, move in and “tame” his both hands to immobilize him. Then strike him with Black Tigers or Golden Leopards. If he covers his body with his hands, strike his upper arms with your leopard punches.

If he moves back, which is his likely reaction, close up with one-step, two-step or multiple-step chase, continuing to strike him with Black Tigers or Golden Leopards. As a Boxer's techniques are limited, he is often quite helpless if you can apply these techniques and tactics skillfully.

Throwing a left jab, again a left jab, and then a right cross, code-named left-left-right or 1-1-2, is a popular tactic in Boxing. Sometimes, it may just be left-right, or 1-2. An effective counter-tactic against it is to brush away the jabs and cross, close the Boxer and strike him. You may, if you like, add a simultaneous hanging fist to his head and a kick to his groin.

Opening a Boxer's Defence and Strike him

If you can close a Boxer and simultaneously strike him, that is excellent. If you can't close him, you can open his defence, using “Jade Girl Threads Shuttle” or “White Horse Returns Head”, and strike him. Either way, it is difficult for the Boxer to strike you.

Closing and Opening can be used Together

The tactics of closing and of opening can be used together. Close a Boxer if you can. When he has been closed, it is difficult for him to strike you when you strike him. But if he escapes your closure, open his defence and simultaneously strike him.

You attempt to close a Boxer using “Single Tiger Emerges from Cave”. He is agile and attacks you with a right cross. If his attack is too near for you to intercept, you brush it away and close the Boxer using “Wave Dragon Back to Cave”.

Striking a Boxer with Leopard Fists

When you close a Boxer, he can't attack you. Also he can't move forward. His likely escape is to bounce back. As he does so, you chase after him and strike him. The leopard fist is effective for this purpose.

Countering the Left-Left-Right of Boxers with Shaolin Kungfu from Wong Kiew Kit on Vimeo.