ATTACKING A BOXER WITH A PLANNED SEQUENCE 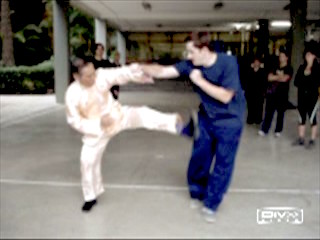 When you are well trained in the kicking tactics, as soon as a Boxer moves, you kick him to initiate you planned attack

An excellent way to fight a Boxer is to kick him. He has no techniques in his whole Boxing repertoire to counter kicks! As you have learnt to kick a Boxer when he uses his left hand, as well as when he uses his right hand, now you can kick him as soon as he moves.

Of course you can kick him more than once. Indeed, if you repeatedly kick him, most Boxers would be at a loss as what to do.

You can also devise other planned attacks against a Boxer after initiating with kicks. One effective way is to close him and strike him continuously. Your chance of beating him will be much enhanced if you attack him with a planned sequence.

Combination of Kicks and Leopard Punches

Combat Sequence against a Boxer

Here is a sequence you can use effectively against a Boxer. Practice it well so that you can apply it flowingly. When you meet a Boxer, as soon as he uses his left hand or right hand, which is virtually as soon as he moves, you apply this sequence on him. You will be pleasantly surprised how effective it is.

Applying the Sequence Forcefully and Flowingly

The sequence is performed with some force and speed. It may be incredible to some people, but if you apply this sequence forcefully and flowingly, most Boxers will be quite helpless. The reason is straight-forward. Boxers have no techniques to counter such attacks. But a very skillful Boxer may avoid your attacks and still strike you.

Trying out the Sequence on Boxers

Participants applying the combat sequence against Boxers. The Boxers find it hard to defend against the planned kungfu attacks. In the foreground are Alex and Donovan, and in the background Sifu Daniel and Christina.

Not Hurting One Another in Sparring

The participants continue their practice of the sequence. Other people may complain, interestingly, that our sparring is not realistic because no one is hurt. Some people feel that sparring partners should hurt one another to be realistic! Our philosophy is different. We believe that in sparring one trains not to be hurt — in practice as well as in real fights.

Attacking a Boxer with a Planned Shaolin Sequence from Wong Kiew Kit on Vimeo.