FROM SHAOLIN TO INSTINCTIVE FIGHTING TO BOXING 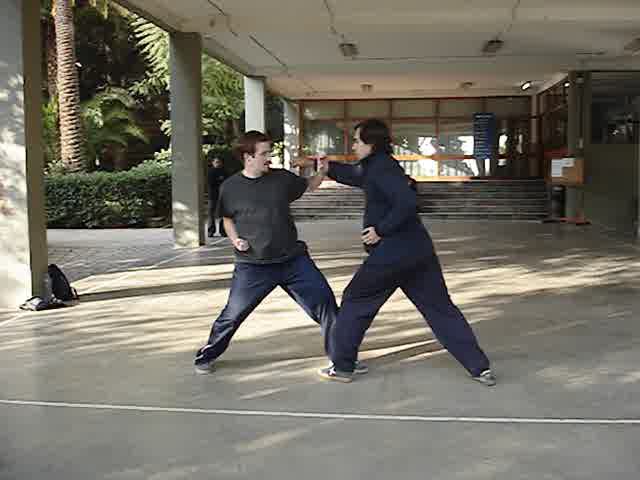 The less perfect the form, the more disadvantageous it becomes in both attack and defence

We had some fun at the regional Shaolin Kungfu course in Barcelona when we purposely degrade our kungfu form. We found from direct experience that the less perfect our form is, the more disadvantageous we become in both our defence and attack. Eventually, when we discard our kungfu form, we would be sparring instinctively, which is sparring without any art.

Then we reversed the process. We still sparred instinctively but tried to minimize obvious disadvantages like throwing the body too far forward that resulted in losing balance, and maximize advantages like striking with the shortest movement so that we could reach an opponent faster. Interestingly we found ourselves sparring like what Boxers did.

The basic Sequence in Picture-Perfect Form

The various counters against Boxing and Kick-Boxing are developed from Sequence 1, Black Tiger Steals Heart, of our Basic Shaolin Combat Sequences. Here, Tim and Alex, both from Shaolin Wahnam Spain, perform the basic combat sequence in picture-perfect form.

Degrading the Form on Purpose

Next, Alex purposely degrades his form, while Tim maintains his form to be picture-perfect. It is obvious that when his form is not perfect, Alex is at a disadvantage in both his attack and defence. In kungfu terms, Alex is handling his own defeat to Tim.

Which is Easier for you to Fight Against?

In this video, though Alex is not using picture-perfect kungfu patterns, he has improved his form. He does not have the best advantages of picture-perfect kungfu techniques for the particular combat situations in question, but at least he does not give away self-created disadvantages like throwing his body dangerously forward. He is approaching a fighting manner not as sophisticated as Shaolin Kungfu but better than random fighting.

Now Alex has improved his form further. He is fighting like a Boxer. It is harder for Tim to fight him now than when his form was random, but still easier than had he used picture-perfect kungfu form.

Now Alex poses as a Boxer. Tim can still use “Single Tiger Emerges from Cave” to respond to a Boxer's jabs, but he uses “Kitten Washes Face” instead, as this needs less force as it flows with the attacker's momentum.

From Shaolin to Instinctive Fighting to Boxing from Wong Kiew Kit on Vimeo.