UNDERSTANDING AND IMPLEMENTING TECHNIQUES, TACTICS AND SKILLS AGAINST BOXERS 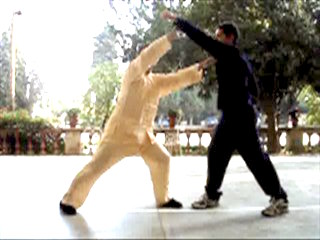 Our main tactics are to brush away his attacks, close him so that it is difficult for him to continue attacking, and strike him. When he tries to escape by bouncing away, we chase after him. Take note that we do not retreat. Retreating would give a Boxer initiative and advantages. You must remember that it is not enough just to know the techniques and tactics; you must also have the skills to carry out the techniques and tactics successfully.

Counter-Strike as Soon as Boxer Jabs

The Boxer is posed by Donovan. As soon as Donovan jabs, the Shaolin exponent effectively counter-strikes his throat or ribs. Of course, this calls for great skills. If the Boxer's initial jabs are close, one first sinks his body to avoid the attacks before counter-striking.

A good Boxer may sink back to avoid the strike and then lean forward to counter-strike. As he sinks back, you can follow up to close him and strike him. A Boxer may be fast, but we can overcome his actual speed with technical speed by using effective body-work.

Various Methods to Deflect or Intercept

This video shows the Shaolin exponent using various methods to deflect or intercept a Boxer's attack, then closing the Boxer and striking him. The poor Boxer is quite helpless. The Shaolin exponent strikes him no matter how he moves!

Handling a Boxer is relatively simple because Boxing techniques are simple. This does not mean it is easy because a Boxer is fast. But if you know the techniques and tactics, and develop the skills, you should be able to handle a Boxer competently.

Understanding and Implementing Techniques, Tactics and Skills against Boxers from Wong Kiew Kit on Vimeo.