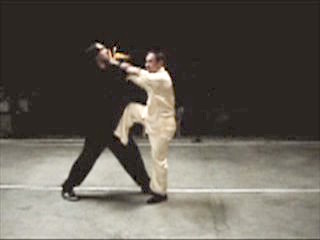 Shaolin Kungfu has an extensive range of amazing and effective techniques

The video clips in this series are dark because they were taken impromptu during the course in the evening when lighting was not ideal for video filming. But they contain invaluable lessons on the superiority of kungfu stances, footwork and techniques over those of Muay Thai and Kick-Boxing.

The choice is to skim them or to show them despite their poor viewing qualities. We choose to show them, leaving the choice to view them or not to the prospective viewers.

Superiority of Stances, Footwork and Techniques

The superiority of the kungfu stances, footwork and techniques over those of Muay Thai is demonstrated and explained. When you opponent kicks, by shifting your stance he cannot reach you but you can strike his leg. If you stretch out your hand, he cannot move forward without being exposed to your strikes.

A Muay Thai fighter has to move close to execute his powerful knee strikes. But before he can do so, you could have struck him. This is the advantage of the kungfu stances which many kungfu practitioners fail to use, or even realize. If he manages to kick, you shift back your front leg to avoid his kick and simultaneously strike his kicking leg.

When you close a Muay Thai fighter or Kick-Boxer and strike him, he has to move back to escape your strikes. You should chase after him, keeping the close space between you and your opponent. You can do this more efficiently than your opponent because you need to move only one step when generally he has to move two

The Advantage of Kungfu Body-Movement

There is a big difference between the typical body movement of kungfu and that of a Muay Thai fighter or a Kick-Boxer. When you close a Muay Tahi fighter or Kick-Boxer, he will typically bounce back. But a kungfu exponent may counter-attack using appropriate body-movement.

A skillful kungfu exponent needs not move his legs to avoid your attack. He merely uses body-movement. He can then turn the table around using appropriate kungfu techniques, like breaking your arm and felling you onto the ground. Such techniques are not normally found in Muay Thai and Kick-Boxing.

Range and Richness of Kungfu Techniques

Shaolin Kungfu has an extensive range of techniques, whereas the techniques in Muay Thai and Kick-Boxing are quite limited. When you have successfully griped the arm of a Muay Thai fighter or Kick-Boxer, he has no techniques in his repertoire to counter you. But the counters from a kungfu exponent are limitless. The counters here, for example, are random and impromptu.

Many Ways to Counter Muay Thai and Kick-Boxing Attacks

As they do not know the rich and extensive kungfu counters, many kungfu exponents move back when a Muay Thai or Kick-Boxing attacker presses in. This is a big mistake. It is like handing your defeat to your opponent. There are many ways to counter their attacks. This video clip shows some impromptu examples.

Superioriuty of Kungfu Stances, Footwork and Techniques from Wong Kiew Kit on Vimeo.