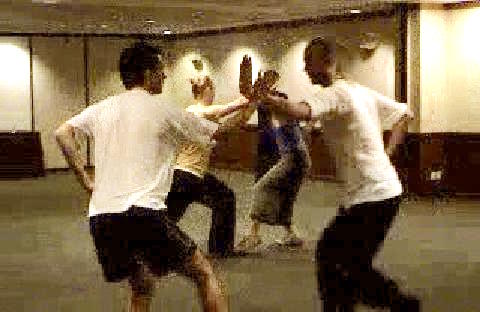 If students only learn forms, they will never know how to apply them in combat no matter how beautifully they perform the forms in solo demonstration. If the training is not systematic, the students are unlikely to be combat efficient. There is so much to be learnt and practiced in kungfu that without systematic training, students will be overwhelmed by the sheer scope and depth of kungfu combat that they will probably resort back to random fighting.

Going straight to free sparring after solo form practice is not systematic training. It is putting the cart before the horse. Free sparring comes at the end of a systematic programme of combat training to test and confirm whether the training is successful. It is not meant to train combat efficiency.

The video series here shows the beginning stage of combat training called one-step sparring. The main objective of this training is not to learn techniques but to develop basic combat skills like right spacing, right timing, right judgment, instant chance, spontaneous response and fluid movement. Hence, techniques are purposely reduced to the minimum so that students can focus on skills. Other stages of combat training will be explained in later video series. 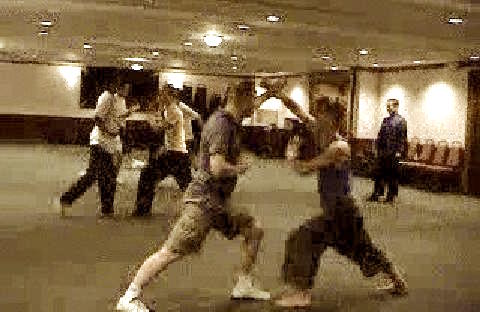 Your partner makes just one attack, and you respond accordingly. In our sparring methodology, there are various stages. The first stage is “pre-choice”, where your partner initiates with a predetermined attack, and you respond with a predetermined defence. The focus is on developing the skills of right spacing and right timing. 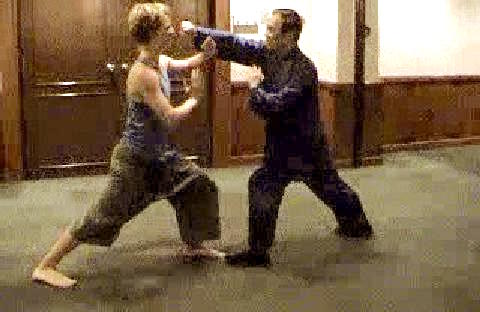 This is a progression from the previous stage. The initiator tries to trick the responder using feint moves. The responder trains to be calm and react accordingly. If he makes a wrong response, he changes or modifies instantly. 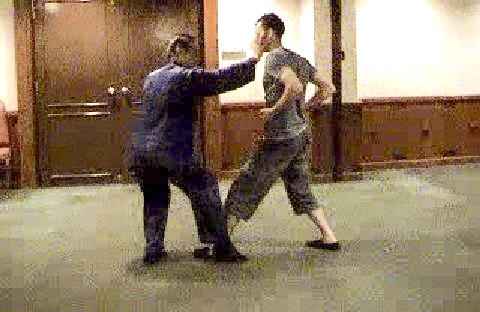 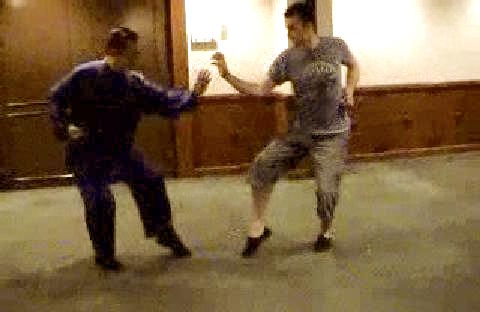 In his poise pattern the responder has a tiger-claw in front keeping an attacker at bay. As the attacker seeks a suitable way to attack, known as “asking the way”, he must remove this threat. He may do so by “opening” or “taming” the defender's guard hand. He should also ensure that the defender could not kick him easily. 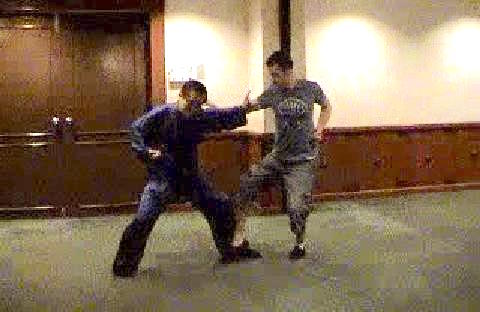 Before an initiator attacks, he must access the spacing between him and an opponent. The onus is on him to adjust his spacing so that he can move in to attack effectively. He does not ask his opponent to come near for him to attack. If he is too close, as in one-step spacing, his opponent may grip his front hand, or vice versa But for this practice purpose, we suspend this option for the time being. 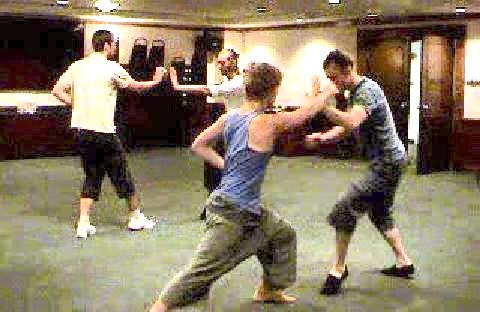 The objective of the training is not to learn techniques, but to develop basic skills. At first the attacker will stop his attack two or three inches from target. Later, when both have developed reasonable skills, the attack may really strike. 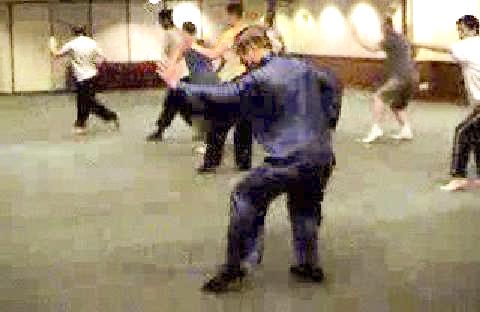 Having developed the skills to move in to attack with one, one-and-a-half, and two-step spacing, participants progress to three-step spacing. The shoot-step is employed for this purpose. The attack can be a top strike with “Poisonous Snake” or a middle strike with “Black Tiger”. 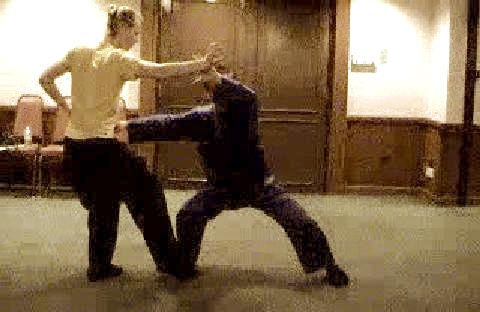 In the attack with a bottom strike, the leg mode is left-right, i.e. from the left False-Leg Stance to the right sideway Horse-Riding Stance. You have to adjust your footwork and cover yourself from the opponent's possible attack with his front hand. 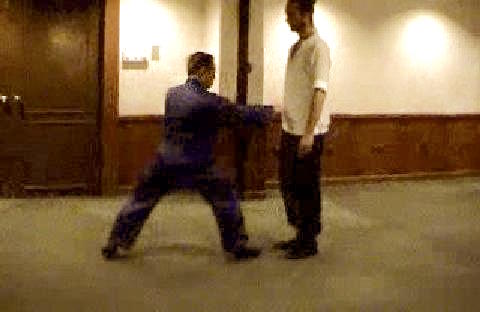 The initiator may move in at various spacing to attack with the right leg mode. Irrespective of the spaces in between you and your opponent, the basic footwork is employing up-steps, roll-steps and shoot-steps in different combinations. 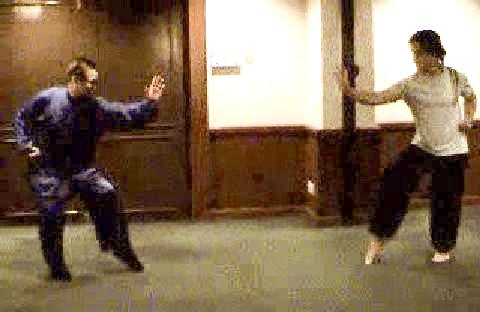 In defending against a horn-punch, at the elementary stage you move your left False-Leg Stance backward to a right Bow-Arrow Stance. In this way you manage to avoid the attack. In kungfu terms, you “shallow”. But you have not taken advantage of counter-attacking at the “golden” moment, i.e. when the opponent's “old strength is spent but new strength has not arrived”. At an advanced stage, you “swallow-shoot”, i.e. you move your front left leg backward half a step into a transitional right False-Leg Stance, then move your front right leg forward to a right Bow-Arrow Stance. 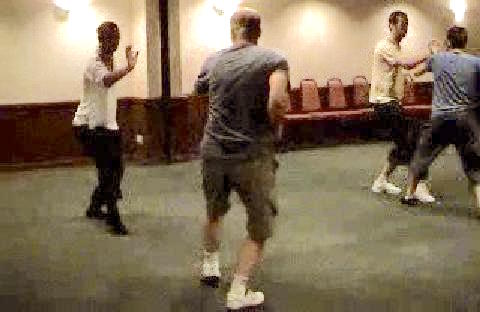 The initiator may attack using different versions of the horn-punch, and the responder has to judge correctly. If he makes a mistake, he uses an instant change. The objective is not just to counter a horn-punch, but to develop basic skills which can be used in any defence or attack. 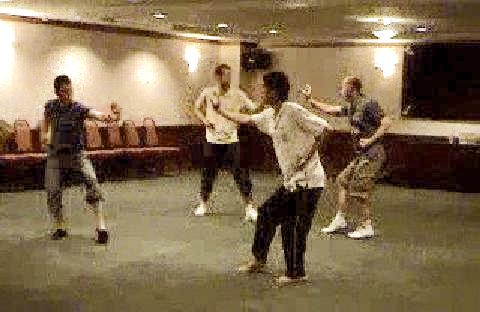 The attach has been predetermined although sometimes there may be options. This is the pre-choice stage in our sparring methodology. The next stage is self-choice. But initially the choice is limited. He has only one choice: top strike or middle strike. But the spacing may vary. Later when both the initiator and the responder are more skillful, the choice can be progressively widened.

As the Choice Widens the Fun Increases

Here the choice is widened to initiating with a top strike, a middle strike or a bottom strike. The top and middle strikes use the left leg mode, whereas the bottom strike uses the right. As the choice widens, the fun increases. At this level, the sparring is only one-step, i.e. one initiates and the other responds with only one pattern each. The patterns or techniques are purposely reduced to the minimum so that the participants can focus on developing combat skills