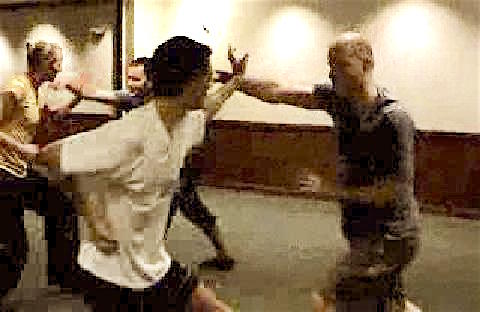 Very few kungfu practitioners of any style today can use kungfu patterns for sparring. The situation has become so bad that some masters even think that kungfu cannot be used for fighting!

Of course, kungfu can be used for fighting. Records clearly show that kungfu practitioners in the past effectively used kungfu patterns and skills for combat. Some members in our Shaolin Wahnam Family also used kungfu effectively in real fights. We do not glorify fighting, and would rather not fight if given a choice, but we can speak from experience that kungfu is effective for fighting.

We are very fortunate that we still have an effective sparring methodology that enables us to use kungfu for combat, and as part of our effort to restore the greatness of kungfu irrespective of its styles, we are willing to share some of the secrets with others if they are interested and deserving. Many of these secrets are revealed in this and other webpages. 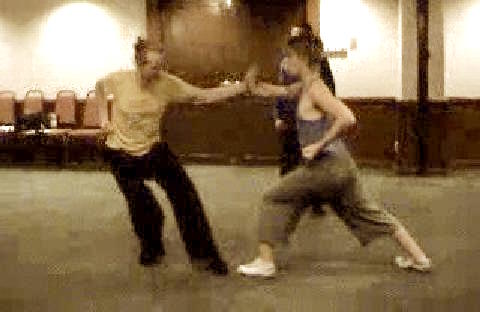 An Encounter of Attacks and Defences

The initiator and the responder enconter a series of attacks and defences form a sequence. We call this sequences “Black Tiger Steals Heart” after its most popular pattern. 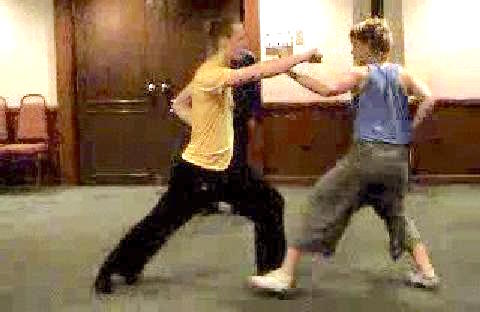 The sequence “Black Tiger Steals Heaart” is practiced smoothly as if it is one long, continuous pattern. Although this sequence is very simple, it is much liked and most practiced by Shaolin students of our school because it offers great opportunities to deepen some essential combat skills. 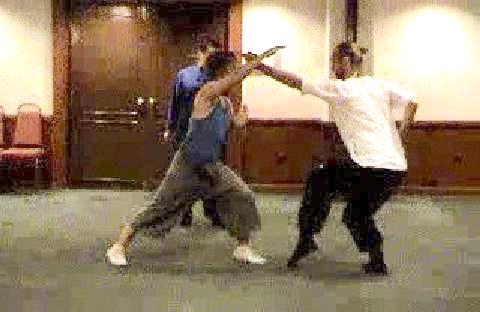 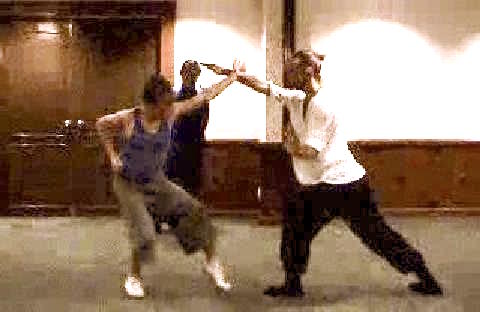 The second combat sequence, “Poisonous Snake Shoots Venom”, is performed in a continuous flow. Notice the effective use of footwork for attack and defence. Later when you are more skillful, you can run a defence pattern and an attack together as if they were one continuous pattern instead of two separate patterns. This forms a smooth movement implementing the “swallow-shoot” tactic. 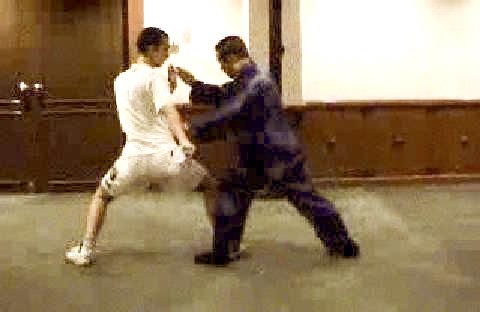 Weaknesses if Moving too Close

After completing Combat Sequence 2, a low strike using “Precious Duck Swims Through Lotus”. is added However, in executing the added pattern, the student moves in too close which is a weakness, allowing a skillful opponent to strike him or fell him onto the ground. 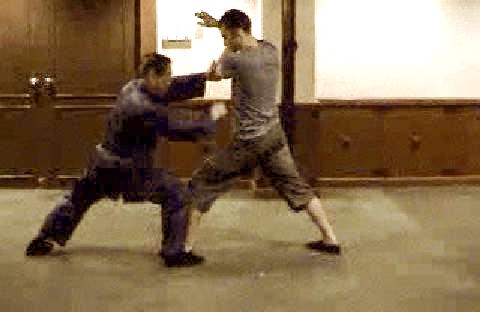 The Essential Tenet of Safety First

We must move in to attack without compromising our own safety. “Safety first” is an essential tenet in kungfu, and in life. There are two considerations to ensure safety, namely footwork adjustment and coverage. 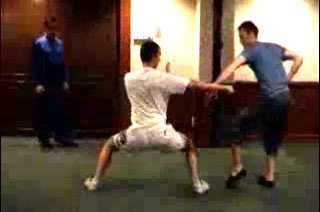 Sequence 3 is developed from the previous sequence by adding one pattern at the end and taking away one pattern at the beginning. A student does not conclude the responder's mode with the last pattern which is a Black Tiger. A skillful exponent may take this opportunity to hit an ordinary opponent. This sequence provides good training for us to avoid such a hit by enabling us to develop spontaneous footwork to retreat if necessary. 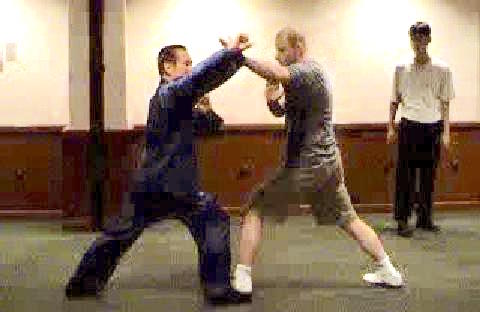 Sequence 4: Hang a Golden Star at a Corner

Sequence 4 is a development from Sequence 3. The initiator circulates his hand around the sweeping arm to “tame” it, and follows up with a horn-punch. The responder intercepts and counters with a Black Tiger. It is essential to cover an opponent arm before moving close with a horn-punch, otherwise the responder would jab into the initiator's ribs. 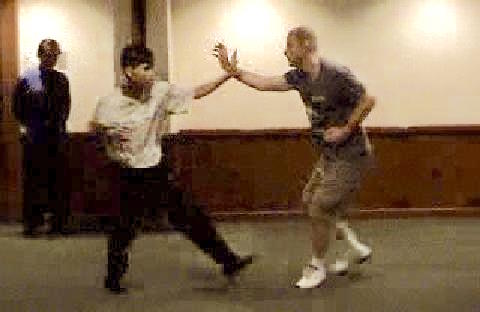 Response According to Opponent's Move

Sequence 4 and Sequence 3 are similar. Hence, at the self choice stage, you may have planned to attack using Sequence 4, but if your sparring partner counter-attacks before you can follow with a horn-punch, you would have to defend againt the attack, which therefore changes your sequence to Sequence 3. This provides an opportunity for approaching free sparring. 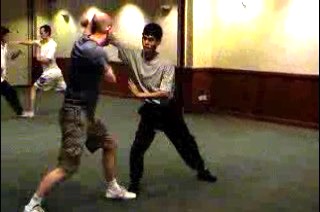 All Typical Strikes within the Sequence

This is Combat Sequence 4, which is called “Hang a Golden Star at a Corner”. All the four basic strikes are found in this sequence. Even within a few minutes between the previous video clip and this one, there is discernable improvement in the performance of the sequence, especially in fluidity of movements and force applied. 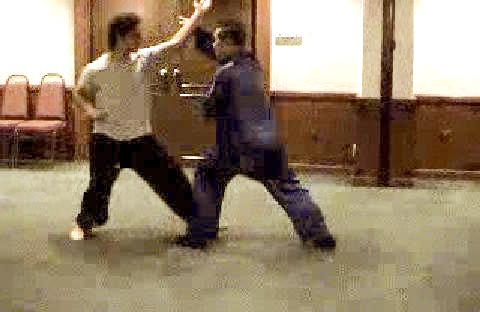 Continuing with Another Sequence 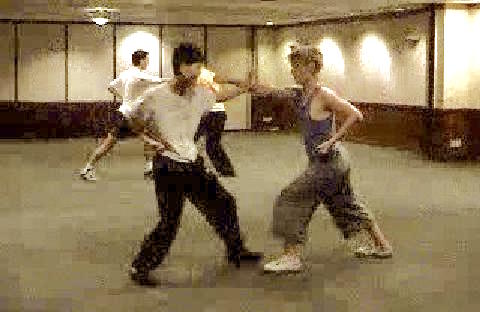 The Method of Continuation

A major probelm faced by many kungfu practitioners when using kungfu patterns in sparring or real fighting is being hesitant due to not knowing what techniques to use next. You can overcome this problem by using the method of continuation as shown in this video clip. 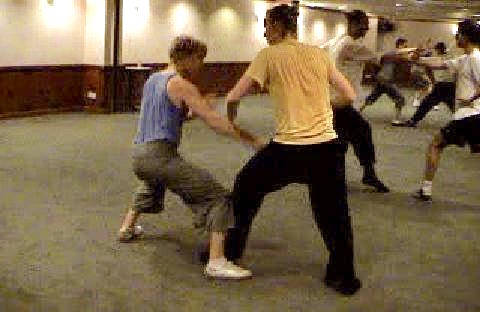 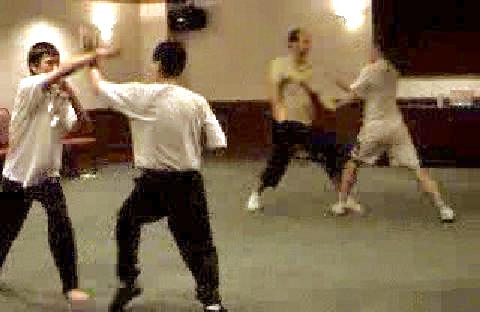 There are some guidelines or methods you can use to enable you to spar spontaneously without thinking of what patterns to use next, yet your attack and defence is coherent and fluid. The main method used here is continuation, making use of Combat Sequences 1 to 4. Can you tell what sequences the combatants use to continue from what other sequences?

Sparring can be Fun and Injury Free

The participants are not only not injured in their sparring but also have a lot of fun. They are able to maintain a coherent and fluid flow of sparring using kungfu patterns by following the method of sequence continuation. Anyone can initiate with any one of the Sequences 1 to 4, and he or his partner continues with any sequence.

From Pre-Arranged Sparring to Guided Sparring from Wong Kiew Kit on Vimeo.