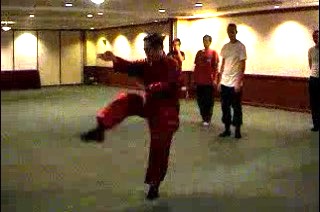 Kicks are not as widely used as strikes because there are more innate weaknesses in kicks. “Innate” here means that even if the kicks are executed skillfully, the weaknesses are still there due to the nature of the kicking techniques themselves. Some of these innate weaknesses include risky exposure, longer distance coverage, more noticeable signals, restricted use of other body parts, and limited balance and agility.

A properly trained practitioner needs to understand these innate weaknesses and the ways to overcome them before he attempts using kicks. He should also have practiced his various kicks thousands of times until his movements are fast and powerful. 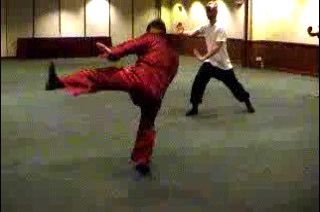 This kick is called a side-kick because an exponent turns his body to a side to execute the kick. In kungfu, the heel, not the edge of the foot, is used in kicking. The pattern here is “Happy Bird Hops up Branch”. It is important to guard the groin when executing a side-kick. 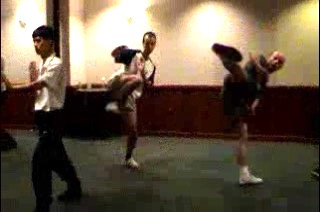 There are different ways to execute the same side-kick. Participants start with a right Bow-Arrow Stance and execute a left side-kick. The kicking mode is right-left. You may also start with the same right stance but execute a right side-kick by rolling the back leg forward. The kicking mode is right-right. Would you know how to execute the same side kick with the left-right and left-left modes? 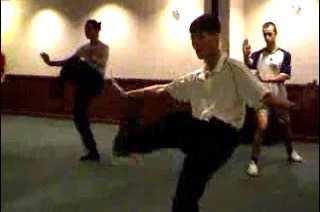 Another important kicking technique is the thrust kick, which is a frontal kick. The pattern of the thrust kick shown here is called “White Horse Presents Hoof”. Again the heel, not the ball of the foot, is used in kicking. 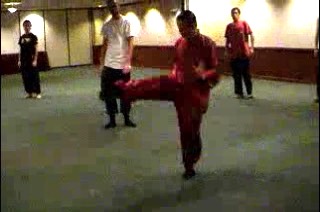 Here the kicking mode is right-right but the thrust kick is performed with the back standing leg. It is a useful technique when an opponent moves in to attack you. You kick him by retreating.

This is a deadly organ-seeking kick. It is sometimes called a snap kick because the kick snaps up from the knee. The kicking point is the instep. The pattern shown here to execute the organ-seeking kick is called “Yellow Bird Drinks Water”. 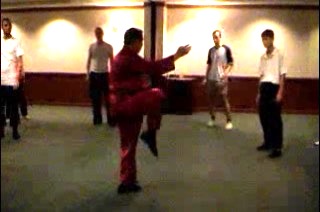 Different Versions of the Same Kick

You can have different ways of executing the same kick by varying some factors, like direction, leg-mode and standing-leg. Different versions of the same kick give you different advantages, or disadvantages if you make a wrong choice. 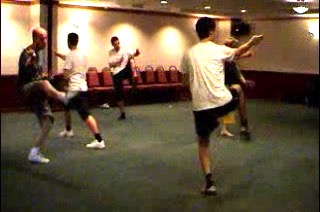 Having Fun with Organ-Seeking Kick

Participants have some fun practicing the organ-seeking kick. The hand movement is an important aspect of the kick. 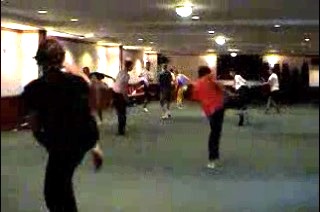 Now the participants have fun with the whirlwind kick. Again the hand technique is important. One hand protects the groin and the other protects the ribs. This pattern is called “Naughty Monkey Kicks Tree”. " 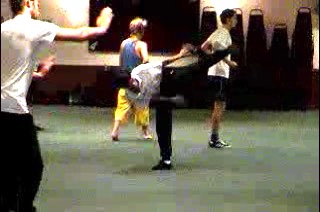 High kicks are seldom used in Shaolin Kungfu because of their obvious risks as well as other technical disadvantages. But there may be situations where high kicks are preferred, like kicking an opponent jumping on you with a knife. The pattern shown here is “Lone Drake Leaves Crowd”. 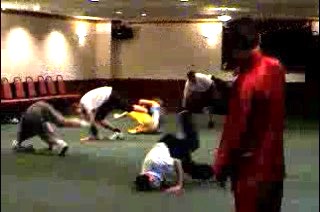 The obvious innate weakness of the sky-striking kick is a glaring exposure of the groin. An effective way to neutralize the weakness when an opponent attacks, is to roll away using the pattern “Gourd Rolls on Ground”.