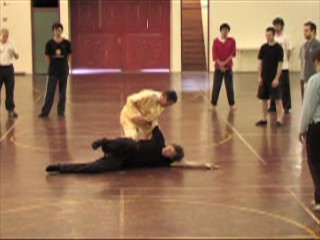 Using internal force and good stances, Grandmaster Wong can fell an opponent who is bigger in size and heavier in weight.

Some people have the mis-conception that there are no throws in kungfu. Throws are only one of many ategories of techniques to fell opponents to the ground. There are other felling techniques like tripping, pushing and sweeping.

But throws and other felling techniques in kungfu are unlike those in Judo and Wrestling. Because Judo and Wrestling are sports, they are protected by safety rules. Hence, a judoka or a wrestling exponent could grab an opponent for a throw without worrying about deadly counter-strikes like jabbing eyes and gripping testicles. But a kungfu exponent is trained to be always careful of such possible counters whenever he attempts a throw or any felling technique.

Felling Technique in Kungfu is not in Wrestling 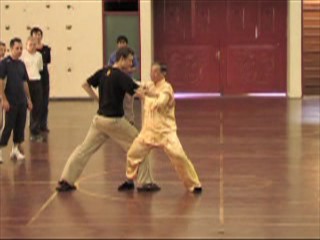 Before you throw an opponent, you must make sure you are safe from his strikes, an important precaution many martial artists do not pay attention to. As shown in the video clip George could strike with his left hand if Grandmaster Wong does not control it. Secondly, felling an opponent in kungfu is not in wrestling. If you unbalance your opponent, felling him is quite easy.

Felling Technique in a Smooth Movement 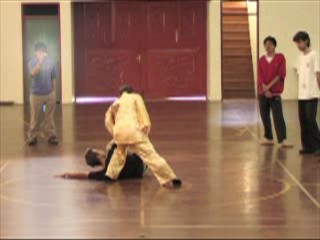 This video shows the felling technique in a smooth movement. This is a backward fall, and the pattern used is called “Felling Tree with Roots”. Grandmaster Wong purposely choose a big-sized person like Geroge to fell him, showing than size and weight are not important factors when using kungfu techniques to fell an opponent.

Learning How to Fall Safely 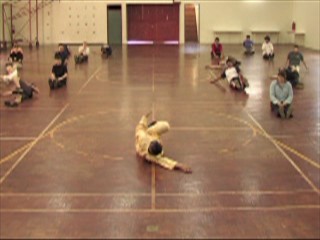 It is important to know how to fall safely before one practices felling techniques. Participants learn how to break fall. Beginning students tend to stop their fall with their hand first, which may result in a fractured arm or dislocated wrist. The hand should be the last part of the body, not the first, to touch the ground. Avoid hitting the head on the ground. 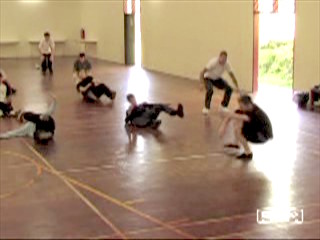 Participants at the Sabah Intensive Shaolin Kungfu Course of March 2007 practice how to fall safely. They just learnt the technique a few minutes ago, and are now enjoying themselves in the practice. Notice that they practice on hard ground.

Grandmaster Wong demonstrates again how to fell an opponent using “Feeling Tree with Roots”. Again, a tall person is chosen to be the “victim”, to illustrate that size and weight are not important. Having learnt how to break fall, Ben falls safely.

The Surprising Stability of the Unicorn Stance 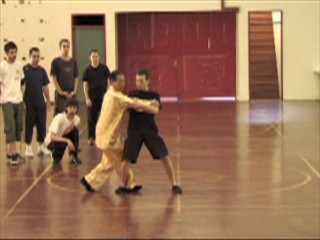 The Surprising Stability of the Unicorn Stance 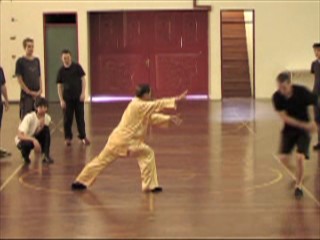 With a skillful application of the Unicorn Stance, Grandmaster Wong has Sifu Jamie under control. He could now strike Sifu Jamie whose hands and legs are immobilized. But Grandmaster Wong “lets mercy flow from his hands” and pushes away Sifu Jamie instead. As usual, classes in Shaolin Wahnam are full of fun and laughter. Here even Sifu Jamie could not hide his laughter. 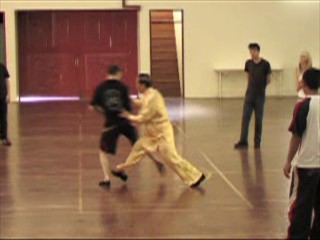 The attacks and counters are now demonstrated in one smooth flow. Grandmaster Wong uses the pattern “Double Butterflies Flying Together” to push Sifu Jamie away. Two types of force can be applied here, namely “strike force” and “release force”. If “strike force” is used, an opponent would be injured internally. If “release force” is used, an opponent is sent falling away. 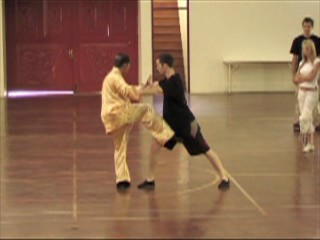 The roles are now reverse. Sifu Jamie attempts to push Grandmaster Wong away using “Double Butterflies Flying Together”. Following the pushing momentum Grandmaster Wong retreats to a Unicorn Step, separates Sifu Jamie's hands and simultaneously executes an organ-seeking kick which strikes an opponent often without his knowing. The organ-seeking kick is famous in Shaolin Kungfu.