WHY SHAOLIN KUNGFU IS TECHNICALLY FASTER THAN BOXING 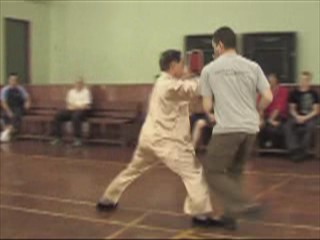 Why a Shaolin exponent can move faster than a Boxer

Many kungfu practitioners find it hard to fight against Boxers because Boxers are fast. But it may come as a big surprise to them that the Boxers' techniques are actually slower than kungfu techniques!

During question-time at the Sabah Intensive Shaolin Kungfu Course of March 2007, a seasoned Boxer, Paul, and a few other participants asked Grandmaster Wong about effective Shaolin techniques against Boxers. Grandmaster Wong also explains some effective tactics and strategies. This video series records some of these lessons. 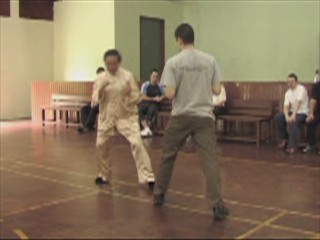 It is important not to underestimate a Boxer. Nevertheless, Shaolin Kungfu is technically faster. A Boxer, for example, usually parries first, then counter-strike, whereas a Shaolin practitioner may defend and counter-strike at the same time.

Shaolin is also Technically Faster than Boxing in Footwork

The footwork of Shaolin Kungfu is also technically faster than that of Boxing. For example, where it takes a Boxer two or three steps to bounce forward or away, a Shaolin practitioner takes only one.

Shifting Stances is Technically Faster than Bouncing About 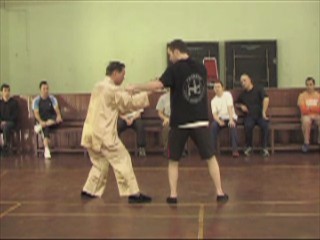 Shifting stances in Shaolin Kungfu is technically faster than bouncing about in Boxing. When Sifu Jamie who acts as a Boxer attacks Grandmaster Wong, Grandmaster Wong shifts his back foot backward to avoid the strike and then move his body forward to counter-strike.

Shifting Body-Movement is Even Faster 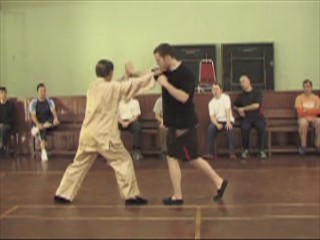 Shifting body-movement, without moving the feet away, is even faster. The advantage is further compounded with the hand movement with the help of an appropriate stance. This superiority in technical speed is accomplished by the harmonies of feet, body and hands.

An Effective Strategy against Boxers is to use Kicks 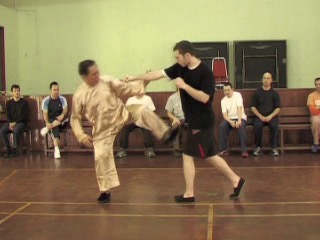 An effective strategy against Boxers is to attack them with kicks. Almost irrespective of how a Boxer attacks you, you lean back and counter with side-kicks. If he bounces away, follow up with more side-kicks. A Boxer has no techniques in his art to counter against kicks.

Some Effective Tactics against Boxers 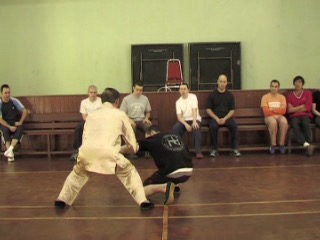 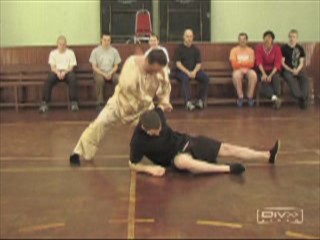 Applying felling attacks against a Boxer is also a very useful tactic. As a Boxer normally bounces about, his stance is usually not solid and it is easy to fell him. You can follow closely in and fell him.