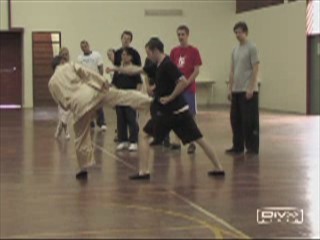 If all other factors were equal, using hand strikes in attack are more advantageous than using kicks. But in real life other factors are not equal. Therefore, there are combat situations where kicks are preferred.

Moreover, past masters also developed some useful tactics for kicking attacks. In other words, instead of moving into an opponent straight-away to kick, if you plan some preliminary moves to prepare for favorable situations, your kicks will be more effective. One such tactic is called pressing attacks.

You press into your opponent with hand strikes. When he is pre-occupied with your hand strikes, you suddenly kick him. On the other hand, you may tempt him to attack you. As he moves in to attack, you surprise him with a kick. You may allow him to attack you a few times before suddenly counter-attacking.

This video series introduce some tactics useful for kicking attacks and defences.

Pressing an Opponent with Continuous Cannons 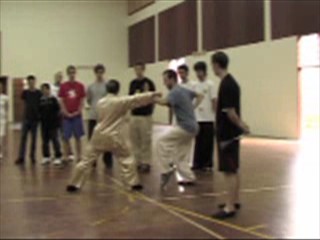 You can press your opponent with “continuous cannons”. It is important that you must protect yourself against sudden counter-attacks when you press into an opponent. 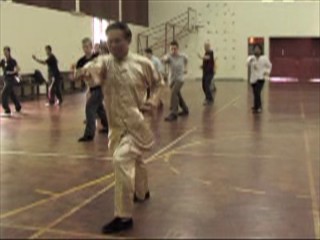 Here are the mechanics of a pressing attack with two continuous cannon punches. This attacking sequence consists of “Black Tiger Steals Heart”, “Single Tiger Emerges from Cave” and “Fierce Tiger Speeds Through Valley”. You repeat this sequence over and over as you press into your opponent.

Surprise your Opponent with a Side Kick

You can press in with continuous attacks, but purposely pause to tempt the opponent to counter. As he counters, surprise him with a side-kick, using the pattern "Happy Bird Hops up Branch". This tactic is called "Tempting an opponent to attack in futility, and suprising him with a counter". It is not necessary to hold the opponent's arm as you kick. If he moves back he may pull you to fall over. 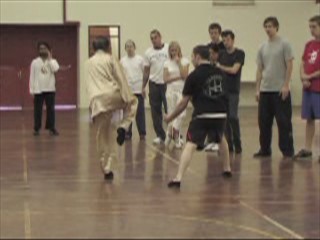 You can counter a side kick with the pattern "Lohan Strikes Drum". This is the tactic of "no-defence-direct-counter" and is excellent against many types of kicks. In some other types of kicks, you may have to use other patterns though the tactic is the same. Use your knucles and not your wrist in his strike, and close your opponent before moving with follow-up attackes. 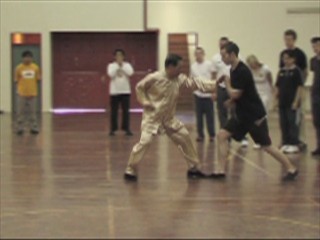 Here is Combat Sequence 9, which is called "Happy Bird Hops up Branch", after the kicking pattern. Sequences 9 to 12 introduce various kicking attacks and their defences. They also show some examples of useful tactics to prepare for your kicks, as well as tactics against kicks. Do you know what these tactics are? 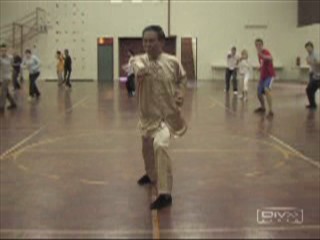 Combat Sequence 9 is performed in solo. Solo form practice is an important aspect of kungfu training. Besides other benefits it enables you to be smooth and spontaneous in your combat application.

Practicing the Combat Sequence with Partners 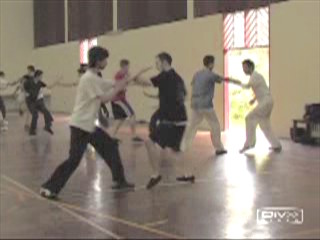 After you are smooth and spontaneous in performing the combat sequence, you practice it with a sparring partner. Those not familiar with combat training may say that in a real fight an opponent does not attack in a planned manner. Do you know why this argument is faulty, and that combat sequence practice is a very effective way to prepare you for real fighting?