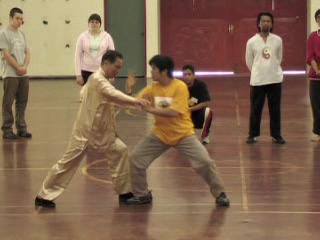 Because they have not been systematically trained in combat application, many kungfu practitioners today throw away the kungfu patterns they have arduously practiced in solo and spar or fight haphazardly. Some even go to the extent of saying that kungfu techniques cannot be used for fighting!

And superior to using techniques is using tactics. Like techniques, the application of tactics developed over centuries from actual fighting. Those who fought frequently discovered that they would have certain advantages over their opponents not only if they used techniques instead of random movements, but also if they used these techniques in certain pre-planned manner.

As a further development, instead of merely executing a punch in a straight-forward manner, you pretend to give a kick, then as your opponent attempts to defend against the kick, you throw a punch at him. You are more likely to strike your opponent if you apply the punching technique in this pre-planned manner. This is using tactics, and this particular tactic is known as “Sound the East, Strike the West”.

This video series, which demonstrates Combat Sequences 7 and 8, shows the applications of some tactics.

Not Necessary to Block 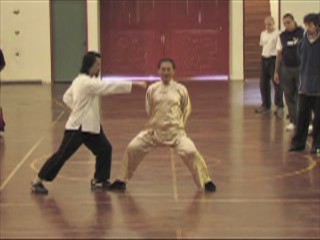 So far we have used “Single Tiger Emerges from Cave” to defend against the middle-level punch. Here, another pattern is used, “Bar the Bog Boss”. Both “Single Tiger Emerges from Cave” and “Bar the Big Boss” are not blocks. Even if you have not used your hand to block, but by moving back into a False-Leg Stance or turning into a sideway Horse-Riding Stance, you have avoided the attack. But for more safety, you still “lean” or “intercept” the opponent's middle-level punch. 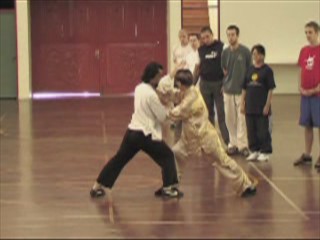 Sequence 7, which is called “Chop the Hua Mountain”, is demonstrated. Grandmaster Wong applies the tactic of "no-defence-direct-counter" using the pattern “Double Bows Tame Tiger” to respond to Dr Damian's chopping attack. Of course, it needs great skills, particularly of spacing and timing, to execute this tactic effectively. 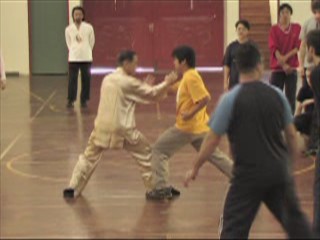 Instead of merely intercepting, you may chop at the opponent's arm as he executes a middle-level punch. This is another example of the "no-defence-direct-counter" tactic. Immediately chop at his neck, taking care, however, to cover his right hand with your left hand. This is applying the tactic of "continuous attack". If he attacks you with his left hand, brush it aside and counter-strike, applying the tactic of "defence-cum-counter".

The Tactic of "Continuous Attacks" 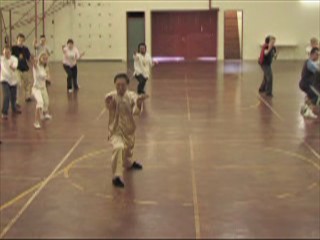 The tactic of "continuous attacks" is executed in three patterns. The first pattern is a bait, tempting the opponent to counter-strike. This is the tactic of "false exposure". You must purposely keep your guard-hand off. As he attacks, turn into a sideway Horse-Riding which will avoid his attack, and simultaneously chop at his attacking arm. Immediately chop at his neck, covering his right arm with your left hand.

the Tactic of "False Exposure"

Revealing the Secret of a Deadly Kick 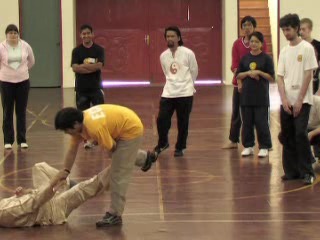