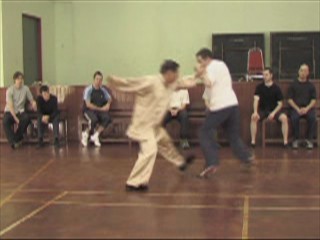 Striking Form and Chasing Shadow are Effective Strategies against Boxers

Although Boxers are fast, Boxing techniques are actually slower than Shaolin techniques. Moreover, there are effective tactics and strategies which you can apply against Boxers.

For example, in Boxing one is not allowed to kick, grip or fell his opponents. In other words, Boxers are not trained to use kicking, gripping or felling, nor to defend against these attacks. If you plan your tactics and strategies to exploit these weaknesses, you have a better chance in beating a Boxer. The video clips here show some of these lessons at the Sabah Intensive Shaolin Kungfu Course of March 2007.

Nevertheless, although you may have better techniques, tactics and strategies, you must not have any illusion that a Shaolin practitioner will always beat a Boxer. Despite these advantages, an experienced, skillful Boxer may still win in a combat 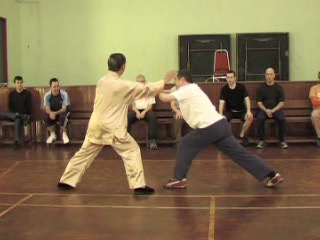 Closing a Boxer and Striking him Continuously 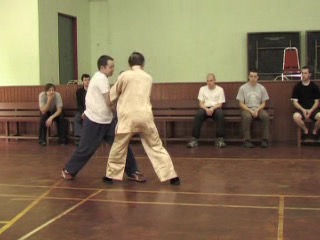 Grandmaster Wong demonstrates an application of a superior technique against a Boxer. He grips the Boxer's arm and “closes” him, making it difficult for the Boxer to strike back or bounce away, while he strikes the Boxer continuously.

Advantage of Stance and Waist Rotation 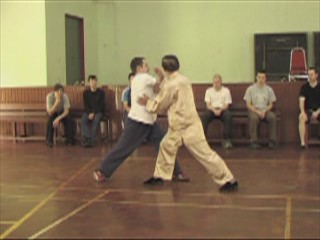 If a Boxer uses the same tactic against you, i.e. closing you with one hand and striking you with the other, you can easily turn the table back to him by appropriate waist rotation as shown in this video. A Shaolin practitioner is able to do this because of his stance, whereas a Boxer without this advantage of the stance is unable to.

Effective Ways to Handle a Boxer 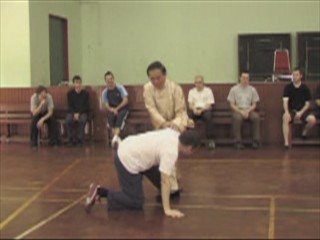 Grandmaster Wong demonstrates some effective ways to handle a Boxer. Notice the difference in combat strategies. The Boxer bounces about, whereas Grandmaster Wong remains calm to observe the opponent. As the Boxer moves in, Grandmaster Wong intercepts him and counter-strikes. He uses his knee to fell the Boxer and deliver a coup de grace with a strike on the Boxer's head. All these movements are impromptu. 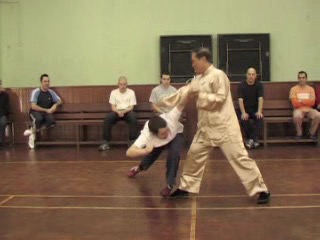 When there is Form, Strike the Form 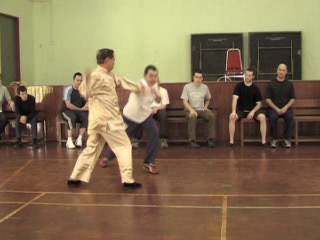 There are many ways to handle a Boxer. Another effective way is to strike his arms, body or head when he attacks. This is applying the strategy of “When there is form, strike the form.” Your arms must be powerful and your footwork both agile and solid.

When there is No Form, Chase the Shadow

When a Boxer attacks you, you strike his attacking arms. When he pulls back his arm or bounces away to avoid your counter-strikes, move in and strike his body, head or back. This is applying the strategy of “When there is No Form, Chase the Shadow”. Of course in a practice session, you keep your strikes a few inches from target, but in a real fight you strike your opponent hard.