DEFEAT YOU HAND TO YOUR OPPONENT, VICTORY YOU CREATE YOURSELF 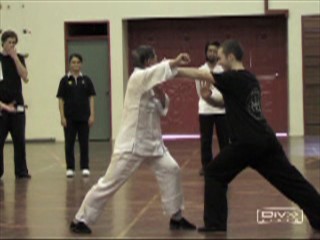 The Old Fox and the Young Tiger

The low level of sparring today compared to that in the past is obvious even when we only examine how martial artists make their first moves in attack and defence. Not only attackers do not prepare themselves well for advantages, they frequently give away disadvantages of themselves to their opponents -- what we call free-offers. But their opponents are often ignorant of these free-offers, thus they fail to exploit them.

Both attackers and defenders do not understand the value of an important principle Sun Tzu advises in his famous “Art of War”. This great strategist says:

Defeat you Hand to your Opponent
Victory you Create Yourself

In other words, if you give free-offers to your opponent, you hand your defeat to him, without him having to do extra work. For example, if you move in and swing your hand backward high in the air to prepare for a swinging punch forward, you give him an easy openning. He just thrusts a straight punch into your face, or worse thrusts his fingers into your eyes or throat.

In the same way, if our opponents give us disadvantages of themselves, we exploit their free-offers and defeat them without having to do extra work because they hand their own defeat to us. Some examples of such free-offers are careless exposure, poor balance, awkward posture and hesitation in action. Actually such free-offers are common in today's low level sparring. What you need to do is to be aware of them and be trained to exploit them.

But if our opponents are well trained, they would not give away free-offers. In this case we have to create advantages for ourselves. This can be realized through effective use of tactics and strategies, which have been frequently explained in our lessons. Some examples are feint moves, turning the opponents' momentum against themselves, and pressing attacks.

As it has been often emphasized, what we learn in our kungfu lessons can be directly transferred to our daily life. If, for example, you are frequently late for work or slow in your assignments, your boss is unlikely to choose you for a promotion. You have handed in your own defeat. On the other hand, if you show initiative in your work and consideration for others in your relationship, you will be a likely choice when a promotion is available. You create your own victory. 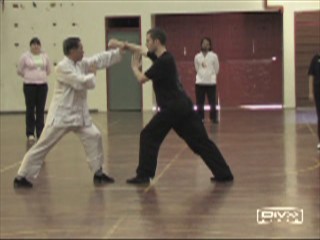 At first students retreat their back leg when applying “Immortal Emerges from Cave” to counter an opponent's “Hang a Golden Star in a Corner”. When they are proficient in this, they can progress to using a more advanced form of footwork where they move half a step backward and half a step forward. This gives some advantages in countering, but is more risky. In this version it is important to have your guard hand ready. 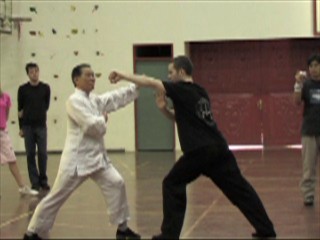 If you make a mistake in your response, instantly change to the correct response. For example, if your opponent executes a left horn-punch but you respond wrongly because you mistakenly judge it to be a right horn-punch, don't freeze. Just change instantly to the correct response. Initially you may hesitate for a second or two, but gradually through systematic training you can make the change instantly. 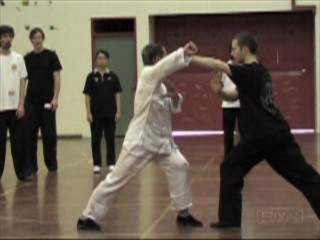 Good Footwork to the Rescue 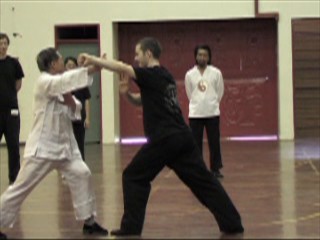 If your footwork is good, even when you make a mistake or when you have been tricked, you may not be hurt. But you still neutralize the attack even when you may be slower. This is to prevent your opponent from following up with another attack. If he moves his head forward to try to narrow the gap you have created by your moving back, you can strike him.

Correct Angling is Important in the Immortal Pattern 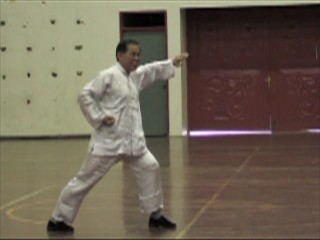 Moving your hand out at a correct angle is important in executing “Immortal Emerges from Cave”. Students commonly make the mistake of moving the hand out at 20 degrees or 80 degrees instead of at 45 degrees. The hand should be extended out; it is also not necessary to “salute” the opponent. 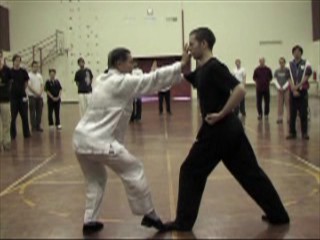 Adopting a poise pattern in your defence while an opponent attacks, gives you various advantages. When the opponent moves in, you can strike him before he initiates his attack. The Four-Six Stance would be useful in such a situation. 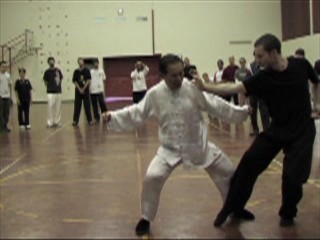 A common mistake many martial artists make while attacking is not covering themselves from possible counter-attacks from their opponent's guard hand. This applies not only at the start of an encounter, but also in the midst of an encounter. 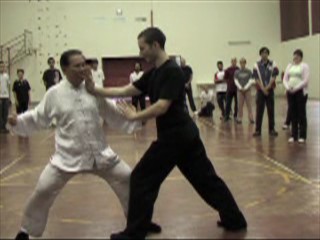 There are some common mistakes in defence. Although the defender has successfully blocked the attack, he often exposes himself in his defence. He also tenses his body, causing internal energy blockage. In his counter attack, he does not close or open the opponent to ensure his own safety first. 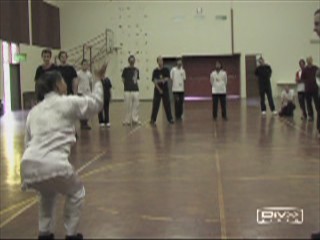 Initiating an attacking using high kicks gives away many disadvantages of the attacker to the opponent. The responder may just squart down and pluck the attack's groin, chop his standing leg, or push him over with a shoulder.

Weaknesses of Boxers, Grapplers and Wrestlers 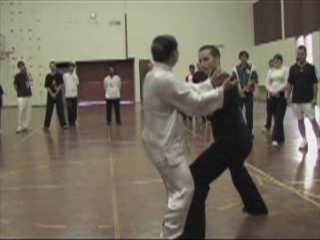 Boxers and Wrestlers give away many disadvantages of themselves to their opponents. As a Boxer attacks, you can kick at his groin which is normally unprotected. As a Grappler or Wrestler attacks, you can strike his head or body. These counter-attacks, however, are not permitted by safety rules in these martial sports.

The Three Internal Harmonies of Jing, Qi and Shen 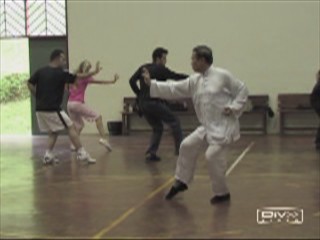 Combat is often a matter of seeking or creating advantages. The attacker and the responder adopt poise patterns for various advantages. The poise pattern provides the initiator the three internal harmonies of jing, qi and shen, or essence, energy and mind, before he starts combat. As he is going to initiate, it is his onus to adjust himself to a suitable spacing for attack. 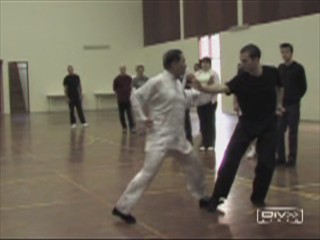 There are some innate weaknesses if you initiate an attack. To neutralize these weaknesses, you can “open” or “close” your opponent while attacking. But in the example shown here, Grandmaster Wong has purposely left one common weakness not taken care of. Do you know what it is? As usual, laughter is a frequent occurrence in Shaolin Wahnam training. 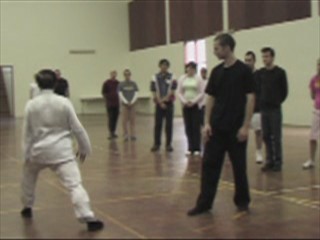 Many martial artists expose their groin when they move in to attack. They themselves are unaware of this weakness. Their opponents too are often unaware of this free-offer. When your groin is well protected, your opponent may still attack your groin, but he would have to make some footwork adjustment which gives you time to respond accordingly. 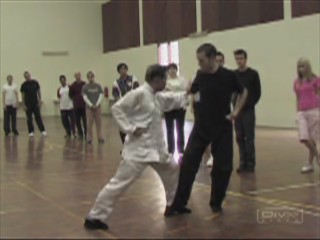 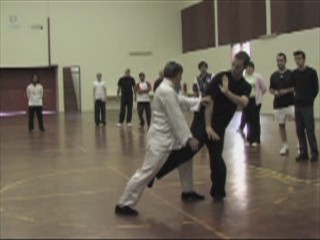 You must ensure your spacing is correct when attacking. If you are too close, you risk yourself to counter-attacks even before you start your attack. If you are too far, a common mistake made by many students, you cannot reach your target. You should be near enough to strike but far enough to be safe.