THE SECRETS OF CONTINUOUS CANNONS 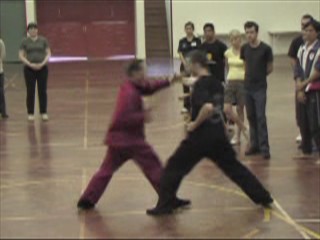 The famous tactic of Continuous Cannons

After having developed basic combat skills like correct timing, correct spacing, sound judgment, instantaneous change, and fluid movement, in Combat Sequences 1 to 4, participants progress to Combat Sequences 5 to 8 where they expand the repertoire of their combat techniques.

Besides providing basic combat skills, the first four combat sequences also provide sufficient techniques for the participants to handle any strikes, which can be generalized into coming from four directions, namely top, middle, bottom and sides. In other words, having practiced Sequence 1 to 4, the participants would be able to handle any hand attacks. The techniques, however, are limited. In fact they are purposely meant to be limited so that the participants can focus on developing skills.

A famous but little understood tactic to implement pressing attacks is “Continuous Cannons”, which is called “lian zhu bao” in Mandarin or “lin chu pao” in Cantonese. “Continuous Cannons” are introduced in Sequence 5, as shown in the video clips below.

Tempting an Opponent with a False Opening 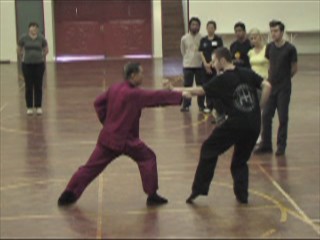 Unlike in the earlier Sequences 1 to 4, here the initiator uses a right Bow-Arrow Stance instead of a left. His body is left unprotected. This is a trap. As the opponent attacks, the exponent wards off, threads, and counter-strikes all in one smooth fast movement, hitting the opponent before he realizes what has happened. This is a famous tactic called “Continuous Cannons”.

The Famous Tactic of Continuous Cannons

The famous tactic of “Continuous Cannons”, which is “lian zhu bao” in Mandarin or “lin chiu pao” in Cantonese, is often heard but seldom known. The secret is revealed. It is actually quite simple but formidable, and is very effective as pressing attacks. Only “Fierce Tiger Speeds Through Valley” is used in this example, but it can be combined with “Fierce Tiger Steals Heart”.

The Mechanics of Continuous Cannons 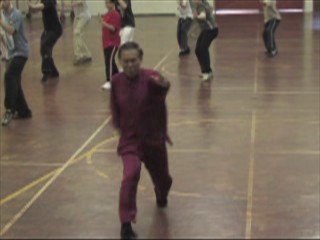 Continuous Attacks at Middle, Bottom and Side 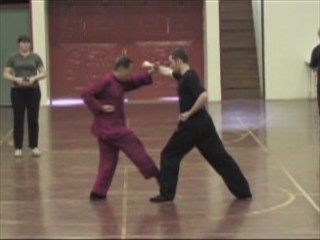 After “Continuous Cannons”, instead of striking the opponent's middle level with “Fierce Tiger” again, Grandmaster Wong strikes his bottom level with “Previous Duck”. He can then continue with “Fierce Tiger” to resume the “Continuous Cannons”, but instead he changes to a side attack using “Golden Star”. Notice that Grandmaster Wong guards the opponent's leading hand before executing the “Golden Star”. The pressing attacks are on three fronts, namely middle, bottom and side.

Progression from Two Moves to One 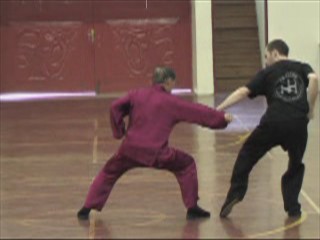 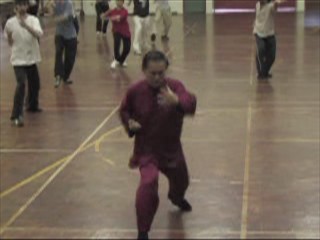 The mechanics of pressing attacks are shown here in solo. They consist of two Fierce Tigers, two Single Tigers, a Golden Dragon and a Precious Duck. This is a version of “Continuous Cannons” and forms part of Sequence 5.

The Skill of Fast Retreat 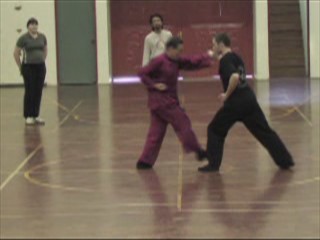 Sequence 5, “Fierce Tiger Speeds Through Valley”, is demonstrated slowly. The responder counters the Golden Star with “Immortal Emerges from Cave”, followed immediately with “Fierce Dragon Across Stream”, which often strikes the opponent unless he is well trained. 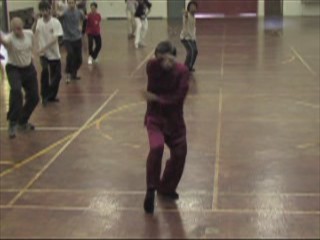 “Fierce Tiger Speeds Through Valley” is performed pattern by pattern. One main objective is to ensure picture-perfect form, without which the practitioners would not be able to derive the best advantages the patterns provide in given situations.

Going Back One Step 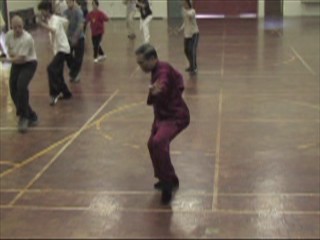 The responder's mode of Sequence 5 is performed. This illustrates how the sequences are developed. If you are not proficient in performing a sequence smoothly, you should go back one step to practice its patterns in picture-perfect forms. "Going back one step" is an important training concept in our school.