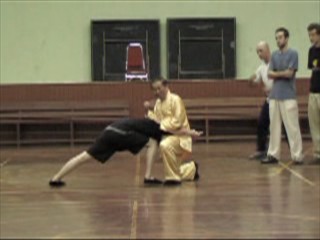 Crouching Tiger against a Charging Bull

Some attackers use the “shoot” to take down an opponent. This is a famous technique in Wrestling, which is a sport protected by safety rules. In real fights where safety rules do not apply, using a shoot is suicidal. You expose your vital spots like your eyes, throat, head and backbone to your opponent's attacks.

There was some heated argument in our Shaolin Wahnam Discussion Forum on whether kungfu techniques were adequate to counter the shoot. Some shoot-lovers went to the extent of saying that Wrestlers were so tough that even striking their head or eyes would not cause them damage! Such a belief is not only naive but highly dangerous.

Others argued that Wrestlers were so fast that they would take down a kungfu exponent before he could hit them. Here it is a question of skills, not techniques. Of course if one is overwhelmingly skillful, he would beat his opponents irrespective of their techniques.

What many people do not realize is that if one is fast enough to grasp his opponent's legs before the opponent could respond effectively, he does not need to take his opponent down to defeat him. He could have struck the opponent's groin or dan tian.

But what would you do if an opponent attempts to take you down with a shoot? In this video series various counters to the shoot are shown. These counters cover the shoot at various stages of implementation.

A Suicidal Attack in Real Fight 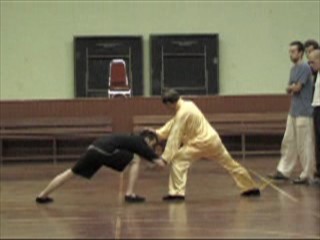 Fierce Tiger Crouching on the Ground

If the attacker has grasped your waist, you can squat down and simultaneously drive your elbow onto his head, neck or spine. This pattern is called “Fierce Tiger Crouching on the Ground”. You may move back slightly if needed before squatting down to neutralize the opponent's charging momentum. If you press forward while having the opponent under control, you may dislocate his neck. So be very careful not to hurt your sparring partner in your training. 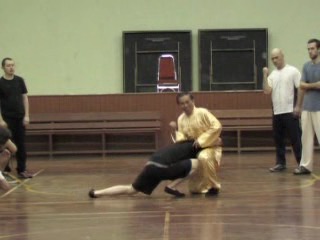 If the opponent has grasped your legs, you can squat down on a Unicorn Stance and simultaneously strike or press down on his head or back. This pattern is called “Heaven Dragon Descends on Earth”. Your Unicorn Step locks his hands. If you press your body forward without moving your feet, you may dislocate his neck. Do be careful.

Various Counters against Different Stages of the Shoot 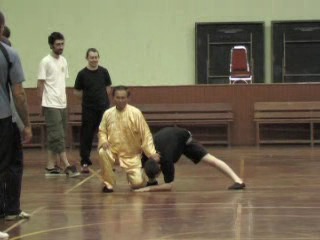 Grandmaster Wong demonstrates various counters against the shoot, depending on the various stages the opponent has accomplished. If you are fast enough to avoid his grasp, you move back and simultaneously strike his head. If he has grasped your wrist or one leg, you move down into a half squat. If he has grasped both legs, turn your body slightly as you squat down into a Unicorn Stance. 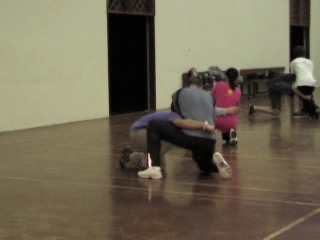 Participants practice countering the shoot. In the foreground are Sifu Wong Chun Nga, Mark, Nicky and Dr Roseline. Notice that they take care not to hurt their sparring partners.

Helping One Another in Our Training 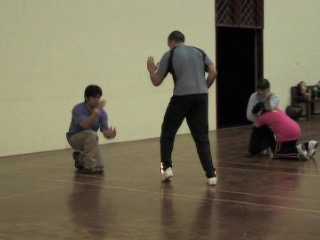 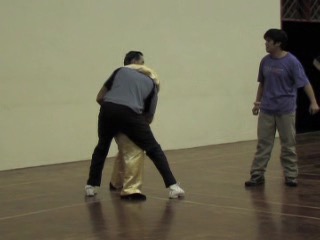 If the opponent is very strong and big, like Mark, and it is difficult to get him down, an effective counter is to dislocate his neck, which cold kill him. So, alternatively grip his throat with one hand and pull at his jaws with the other hand. This pattern, which can be used to dislocate his neck or just pull at his jaws, is called “Double Dragon Plays with Pearl”.

Having Fun and Injury Free 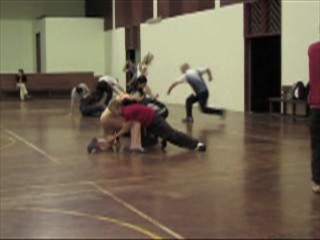 Another common aspect in our training is having fun. And unlike in many other martial art schools where injuries are common, even expected, combat training in our school is injury free.