BEING FLUENT IN KICKING TECHNIQUES BEFORE APPLYING THEM IN COMBAT -- OVERVIEW 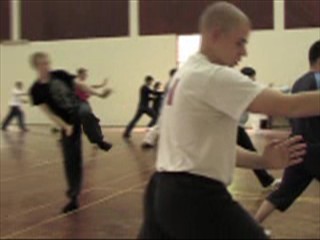 There are a few important points you need to bear in mind when using kicks.

Kicks contain some innate weaknesses, i.e. weaknesses due to the nature of kicks themselves and not due to inadequate skills in applying the kicks. For example, no matter how skillful you are, as you stand on one leg when kicking you are not as mobile as when you are striking with your hands. You are also more exposed.

Hence, you need to practice your kicking techniques until you can execute them very well before you attempt to apply them. You should also be familiar with the common counters against the kicks you intend to apply so that should your opponent use these counters, you know how to respond spontaneously.

Four basic kicking techniques are introduced in Combat Sequences 9 to 12. These four different types of kicks represent the most common kicking attacks combatants use today. 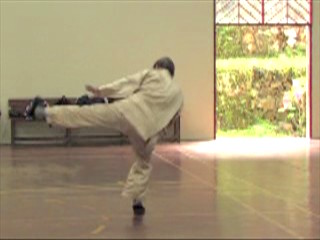 Here is a side kick using the pattern “Happy Bird Hops up Branch” Having good balance as well as coverage while kicking are important. One should breathe out or at least keep the mouth open when kicking, otherwise the kicking energy would recoil and be locked in the chest. The kick is performed with the sole, and not the edge, of the foot.

It is very important that one must have practiced a technique sufficiently before applying it in combat. This is especially so in kicks because executing kicks involves many innate weaknesses. If your kicks are not well executed you will be handling your own defeat to your opponent. 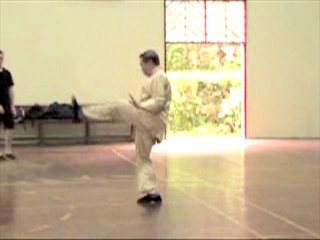 Here is a thrust kick using the pattern “White Horse Presents Hoof”. A common mistake amongst students is to tense the chest or arm muscles when kicking. You should be relaxed, especially at your arms and chest. The kick should be executed at the heel. 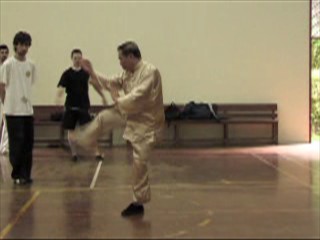 This is the deadly “liew yam theui” (Cantonese pronunciation) or “Organ-Seeking Kick”. The kicking point is the instep of the foot. A flowery move with a supportive hand is important. This pattern is called “Yellow Oriole Drinks Water”. 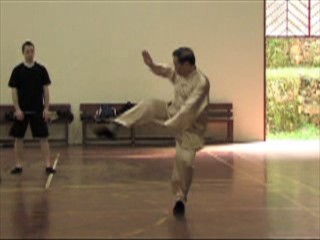 This kicking technique is called a whirlwind kick, and the pattern implementing this technique is called “Naughty Monkey Kicks at Tree”. The kicking point is the shin. When used in pairs, they are called “yein-yeong theui”, or “Mandarin Duck Kicks”. Mandarin ducks are usually in pairs, a male drake and a female duck. It is important to guard your ribs and the groin when executing the kick.

Kicking at the Sky 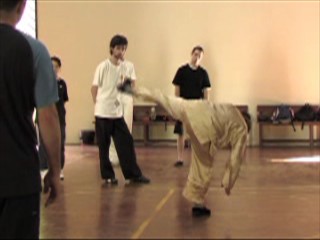 The pattern implementing the high kick here is called “Kicking the Sky”. High kicks are not often used in kungfu because they are dangerously exposed and place the exponent in an awkward position. Nevertheless, there are occasions when this kick may be favorable. You should roll away if an opponent moves in to attack your exposed sex organ.