MOVING BACK ONE STEP WHEN IN DIFFICULT SITUATIONS 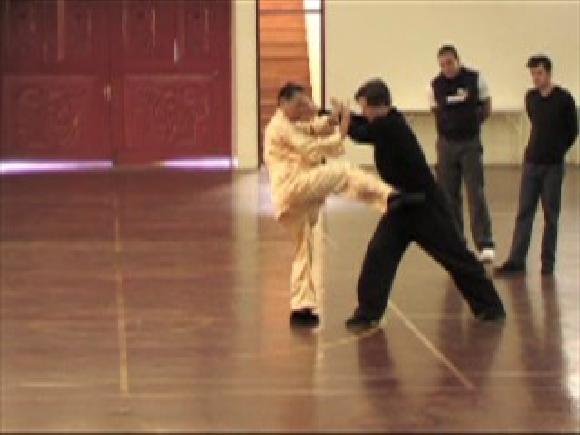 A Shaolin Wahnam kungfu student knows the defence against any attacks. This statement may sound boastful to other people, but it is true. Nevertheless, this does not necessarily mean that he can actually defend any attacks. He may know the defence techniques, but if he lacks the skills he would still be unsuccessful.

To help students recapitulate, an important aim of the Intensive Shaolin Kungfu Course like this one is to provide students with the necessary skills and techniques against all possible attacks. Attacks can come in countless ways but they can be generalized into four categories, namely striking, kicking, felling and gripping.

This video series shows attacks and counters forming Combat Sequence 12, which is named “Naughty Monkey Kicks at Tree”. It introduces the deadly whirlwind kick. Its “soft” defence, using the pattern “Taming Tiger with String of Beads”, can be used against any kicks. This video series also recapitulates the important principle of “moving back one step when in difficult situationS”, which is very useful in combat as well as in real life.

A Shaolin Wahnam Student Knows the Defence against any Attack 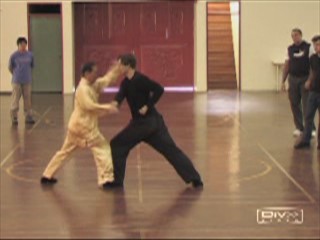 If you practice this counter-attack, called “Chop the Hua Mountain”, 50 times a day everyday for six months until you have become very fluent in it, you can defeat any ordinary opponent who moves in to attack you with a typical strike. But Ben is not an ordinary opponent, he is a Shaolin Wahnam student, and a Shaolin Wahnam student knows how to defend against any attack. If he can't, despite his knowing, it is due to his lack of skills.

Move Back One Step from a Seemingly Helpless Situation 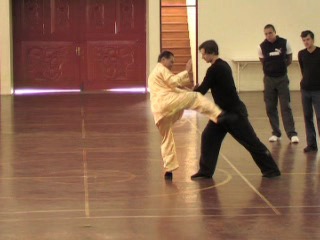 We Value Life, our Own as well as Others'

The attacks and defences shown in the previous video clip are now repeated in one smooth flow. The whirlwind kick is a deadly kick, as it aims at an opponent's ribs, liver or kidneys which may cause fatal injuries. Hence, you must use it with great care — even against real opponents. We value life, our own as well as others'. We do not hurt, unless absolutely necessary. 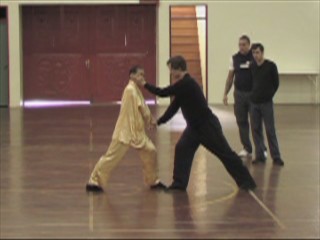 What would you do if your hand is being held and you could not “thread” it away as shown in the previous video clip? Move back into a False-Leg Stance to avoid the chopping attack, and simultaneously circulate your held arm to release the opponent's grip. Then “close” him and execute the whirlwind kick. 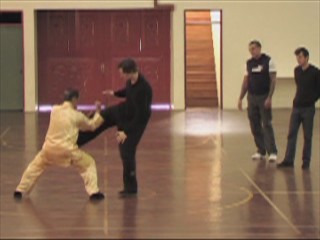 You can counter a whirlwind kick using interception with the pattern “Bar the Big Boss”. Notice that this interception technique is not a head-on block, not meeting a powerful horizontal sweep horizontally, but coming down vertically. Indeed, the more powerful the sweeping kick, the more damage the opponent will sustain. You must of course have reasonable force to execute this relatively “hard” counter.

Safety First in Combat and in Life 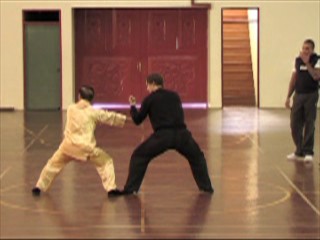 Immediately after the interception, you can execute a low punch at your opponent's dan tian. As this is a close attack, you must be ready if the opponent counter-attack, especially at your head. Ben rightly chooses “safety first”, retreating his kicking leg and defending with a vertical block, also using the pattern “Bar the Big Boss”. 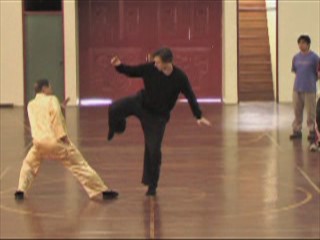 Instead of using a “hard” defence against the powerful whirlwind kick as shown in the previous video clips, you may use a “soft” one employing the pattern "Taming Tiger with String of Beads". Without moving your legs away, but adjusting your foot positions), shift your body slantingly back to avoid the sweeping kick. As the kick passes, immediately shift forward again to strike the opponent, taking care to cover the opponent's possible attacks with his legs, hands or other parts of his body.

Using the Right Hand Form and Stance for the Occasion 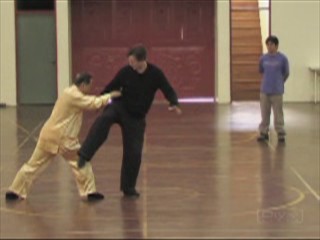 The attacks and counters are now repeated in a smooth flowing sequence. Instead of using a level fist and a side-way Horse-Riding Stance in the pattern “Precious Duck Swims through Lotus” to strike an opponent's dan tian, you can use a leopard fist and a slanting Bow-Arrow Stance in the pattern “Golden Leopard Speeds through Jungle” to strike the opponent's ribs. The best hand forms and stances are chosen for the combat situations in question. 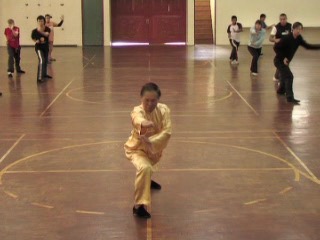