DIFFERENT LEVELS OF SOPHISTICATION IN SPARRING AND FIGHTING -- OVERVIEW 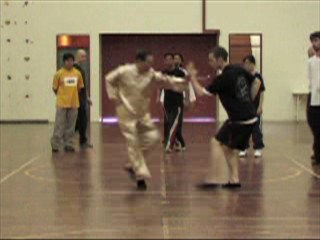 Sparring and actual fighting may operate at the following levels of sophistication:

The lowest level is that of haphazard fighting, where combatants hit each other randomly. Kungfu sparring has been debased so badly that today this is the level many kungfu practitioners operate at.

Kungfu masters in the past operated at much higher levels. They did not throw away their kungfu forms and punched and kicked randomly. Not only they used kungfu techniques individually, they linked them into meaningful sequences. Further, they employed principles, tactics and strategies to enhance their fighting efficiency, and generalized particular advantageous ways of fighting into combat principles.

From their fighting experiences, past masters formulated principles from their applications of techniques, tactics and strategies. For example, instead of executing a kick straight-away, they found it more effective by first throwing a punch, and when the opponent responded to the punch, they executed a kick. They often gave poetic descriptions to such combat principles, and this example is called “Sound the East, Strike the West”. Hence, by understanding such principles and applying them, we benefit much from the experiences and teachings of past masters.

We must also remember that when we fight at a higher level of sophistication, it does not necessary mean we will defintely win the combat. An opponent who operates at a low level of sophistication but is very skillful may be victorious. As an analogy, a skillful cyclist may travel faster than a driver of a car if he is incompetent in driving.

But if all other things were equal -- even when they are not equal but the difference in skills is not too great -- a combatant operating at a higher level of sophistication certainly has many advantages over his lower level opponent.

The video series here shows some examples of these principles, tactics and strategies at high levels of combat sophistication.

Changing from One Sequence to Another 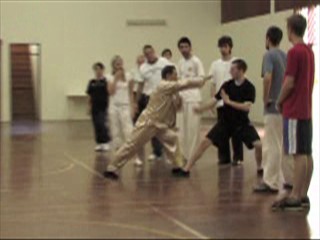 If you use sequences in combat, you operate two levels higher than an opponent who spar or fight randomly. This is Combat Sequence 10, which is called “White Horse Presents Hoof”, after the name of the kicking pattern. This sequence is a development from Combat Sequence 9. If your opponent does not move in to attack you when you offer a false exposure, or if he hesitates in any way, you may change from Sequence 9 to Sequence 10 by moving in with a thrust kick.

Sequence 9 is performed slowly to show some important combat principles. Your opponent counters the kick with the pattern “Save the Emperor with Single Whip”, applying the tactic of “no-defence-direct-counter”, As you move in to attack the opponent's throat after avoiding his Single Whip, it is important to “tame” his hand. 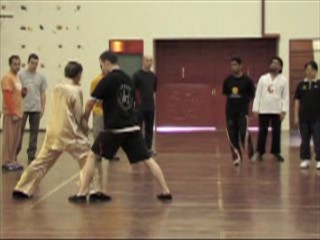 The initiator's and the responder's roles are now reversed. You can employ “shen-fa” or body-work to neutralize an opponent's closure on you. Not only you can release yourself from an awkward position, you may also reverses the technical advantage of the situation. These movements in neutralizing an opponent's advantages are impromptu. 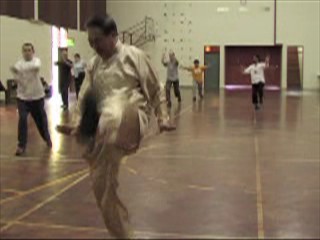 The initiator's mode for Combat Sequence 10, which is called “White Horse Presents Hoof” after its kicking pattern, is now performed. Solo practice is a good way to ensure that you can apply your techniques smoothly in a sequence for combat. Using sequences in sparring or fighting, of course, gives you many advantages over haphazard sparring and technique sparring. 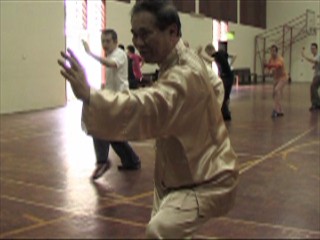 Lacking in Jing, Qi and Shen 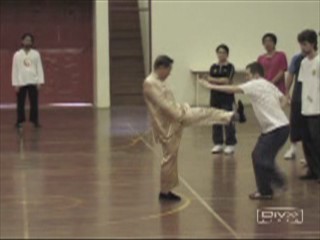 Here is an example of what you should not do. The sequence is purposely performed poorly. There is little elegance, force and presence of mind. In other words, the internal harmonies of “jing”, “qi” and “shen” are lacking.

Element of Threat in Attack 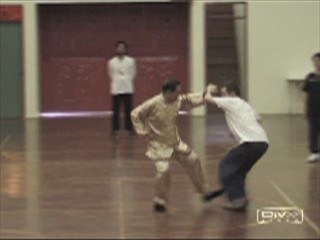 This is how kungfu should be performed -- with the six harmonies of feet, body, hands, elegance, energy and mind. Although the patterns are the same as those shown in the previous video, the performance here is vastly different. It contains an element of threat, which is important in an attack.

The Method of Continuation 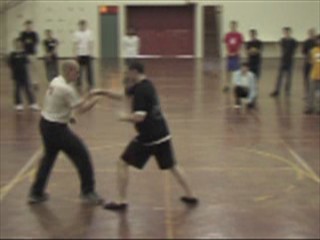 Using combat sequences is more sophisticated than using individual techniques, which in turn is more sophisticated than fighitng haphazardly. After completing one sequence, you may continue with the same or another sequence. You can start with Sequence 9 or Sequence 10, which incorporate kicking attacks, and continue with any one of Sequences 5 to 8, which use the right leg mode and a variety of hand attacks. Something is lacking here. Do you know what it is? The next video will give the answer.

Speed and Force in Element of Threat 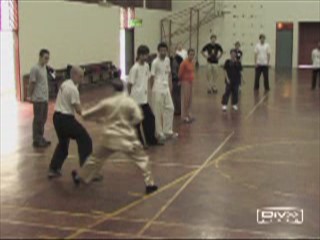 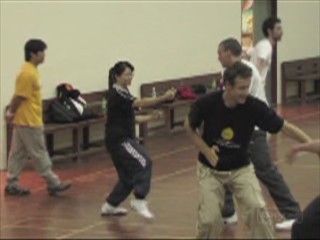 Participants practice free sparring using the combat sequences they have just learnt. It is worthy of note that unlike in many other schools, in Shaolin Wahnam sparring is not only injury free but is full of fun. Participants help one another and not attempt to out do each other. Though the attack is threatening, it is under full control and no one is hurt.